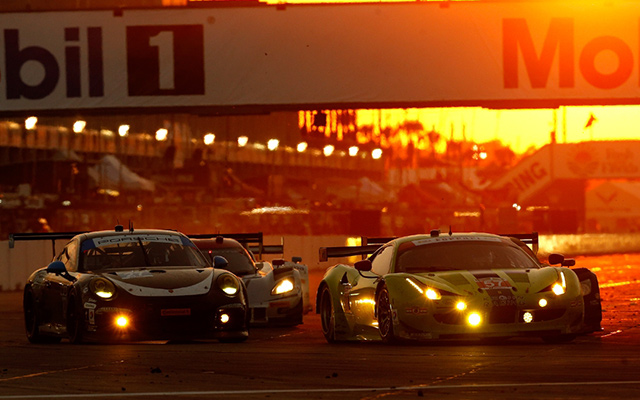 The idea of a visit to the Sebring 12 Hours was first mentioned during a conversation I had with staff from Travel Destinations at Le Mans 2012. Although I was interested in going I knew right away that it was unlikely to happen, for both personal and racing reasons. However, circumstances can change unexpectedly and they certainly did so over the next few months, particularly in racing terms.

By the end of November I knew that the following year would be the last chance to see LMP1 prototypes at Sebring, as it would be the final season of the ALMS. At the same time there were persistent rumours that Audi would be present, even though the event wasn’t on the WEC calendar. As for me personally, I now had both the time and the funds available to be there.

Bearing all this in mind, it didn’t take much deliberating on my part before I was on the phone to Travel Destinations in early December and booking their self-catering package. This took care of my race tickets, car hire and accommodation in Sebring – a few days later I’d booked everything else, including my transatlantic flights and a hotel for an overnight stay in Orlando.

Once the Christmas and New Year celebrations were over the weeks passed quickly, until eventually it was time for my departure to Florida, on the Tuesday before the race. My journey to Orlando was smooth and uneventful – before I knew it our plane had landed (almost an hour early) and I was at my hotel. After getting something to eat it was time to sleep and reset my body clock.

After a decent night’s sleep I woke up on the Wednesday morning to bright sunshine – once I’d finished breakfast I collected my hire car from the airport and began the drive south to Sebring. I’d never driven in America before but it was a comfortable journey, helped by the highways en route being almost empty. Along the way I spotted Andrew and Richard from Travel Destinations so we all stopped for some lunch a few miles outside Sebring.

Once we’d finished lunch I called at Wal-Mart for some supplies, before heading to the self-catering studio unit that would be home for the next few days – it was ideal for my needs. After dropping off my bags and supplies I headed to the track for the first time and collected my race ticket – I spent a couple of hours exploring the paddock and hairpin areas whilst watching the action on-track. As the sun started to set and racing ended for the day I set off for home via a nearby fast-food restaurant.

Practices started at 8am on Thursday and I arrived trackside a few minutes into the first one – it was sunny again but at this time rather chilly. I began by exploring the area behind the pits (which turned out to be mostly food and merchandise stands) before taking in action from some of the most well-known parts of the track. By the time the first ALMS practice started mid-morning I had been to Turns 1 and 17 as well as Turn 10, where I was invited to view from up on the famous scaffolding.

After watching most of the ALMS practice from the new temporary seating at the hairpin, I returned to the end of the pit lane just as the session ended – cars returned to the paddock passing right in front of my feet! I stayed around the pits until noon when I went to meet up with Andrew and Richard from Travel Destinations, who had kindly invited all their customers to lunch. Six of us in total headed to Vanessa’s, which does buffet style catering and hospitality for teams and personnel – Guy Smith and drivers from Rebellion Racing were some of those that dined around us. Straight after lunch I made my way to Audi’s Fan Zone on the inside of Turn 1 – it was very quiet although they had set up their display of four cars that had previously won the race.

The rest of my afternoon and early evening was spent moving around from the other new temporary seating area at Turn 14, through Turns 10, 13 and 17 before ending up behind the pits as the sun set. Once I’d had something to eat it was time to get out to the hairpin for the beginning of ALMS night practice – I stayed there for the first half of the session and then watched the remainder from the Turn 3, 4 and 5 viewing area, before driving back home.

Track action on Friday also began at 8am and again I arrived just after the first session started. The day’s timetable listed slightly less racing (especially ALMS) but more fan activities. Between the first two sessions I visited the Gallery of Legends building, which seemed quite small inside but contained some interesting cars, including a number of previous race winners.

Before the ALMS practice started I was in the Audi Fan Zone, where I got to meet 5-time winner Dindo Capello – I left there just in time to get up to Turn 10, from where I watched the final ALMS practice prior to qualifying. After the session ended I was back at Audi for two presentations, one either side of the official autograph session in the paddock that was very popular.

Following the second Audi presentation I grabbed some lunch and ate it while sat in the Turn 14 seats watching the qualifying sessions – the track seemed quite empty with each class appearing separately. There was just time for a final Audi presentation reviewing their qualifying performance before the Fan Forum began – an interesting half hour of Q & As with drivers from each ALMS class.

There was a short wait until the final action of the day, which featured a large number of vintage race cars. I spent a little while sat in the seats at the hairpin taking in my very pleasant surroundings before I eventually set off home for a quick change of clothes. Shortly afterwards the six of us with Travel Destinations went out into Sebring for a curry and a few drinks – a very enjoyable evening.

Warm-up for the race on Saturday was at 8am and I parked my car about 20 minutes before it began. The sun had barely come up so it was still cold, yet the car parks were already much busier than the previous two days. Once the session was over I had time for some breakfast, before I met up with the other members of the Travel Destinations party for the grid walk.

It turned out that two members of our party had gome to Green Park straight after the curry and neither had slept or been back home. It wasn’t the way that I would have prepared to watch a 12 hour race, but they looked surprising fresh (probably because they’re both younger than me).

Walking on the start / finish straight was very cool and also very busy – all the cars and drivers may have been there but they were almost hidden amongst the large volume of spectators present. The forty-five minutes we were allowed on the grid passed quickly, but I was lucky enough to speak to Andre Lotterer, Benoit Treluyer and Dr Ulrich whilst collecting photos and autographs along the way.

After the grid was emptied and the national anthems were complete I just managed to get to the raised viewing area on the outside of Turn 3 in time for the formation lap – at 10.45 they were off!

Over the course of the next 12 hours I visited the entire track at some point. At lunchtime I was stood on the scaffolding at Turn 10, whilst mid-afternoon I was in the only area of shade – this being provided by the small number of trees at the Fangio chicane (Turn 8). As the sun set I was at Sunset Bend (Turn 17) – this was a spectacular sight. After dark I was down near the hairpin and had a clear view of the winning Audi sending up a shower of sparks each time it raced past me.

As the race finished I was on the midway with a great view of the celebratory fireworks. Shortly after I made my way over to the pit lane – those who’d also gathered there had only a short wait before we were all allowed access. I walked right past the winning car before finding a spot opposite the podium to watch the victory ceremony – the drive back home followed a little while later.

Sunday morning for me meant packing everything up into the car and driving north towards Orlando – I had a ticket booked for a baseball game in Kissimmee, as my flight home wasn’t until the evening. More glorious weather accompanied my journey and it continued throughout the relaxing afternoon I spent watching the game – the pace of my day was quite a contrast to the others I’d had over here.

It was only a short drive to the airport after the game had finished – once I’d returned my hire car I was able to make my way straight through the airport to catch the overnight flight home. A few hours later I was landing back in the UK and being met by my family – back to reality!

I travelled to Sebring as a customer of Travel Destinations – I’d like to thank Andrew, Richard and Helen for their part in making my trip so memorable. I’d also like to thank my understanding family.