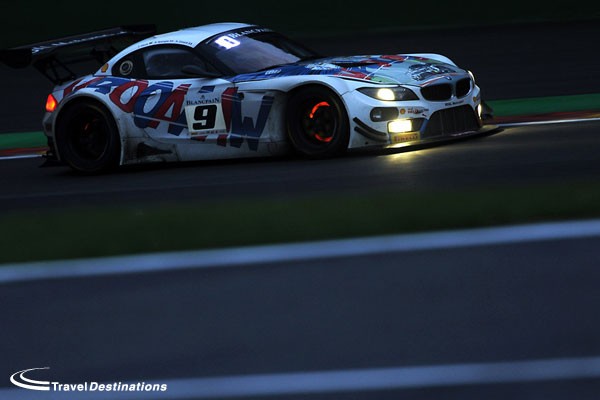 There was a time when Spa Francorchamps’ annual 24-hour race was a touring car contest, relevant only within Belgium’s borders, but those days are very much over. Since 2001, it’s become a pure GT race, and in many ways much better for it. The 24 Hours of Spa is a race that’s become famous for its gritty and spectacular racing. If you love witnessing feats of motorsport endurance first hand, there’s few better places to go than the Ardennes Forest in July.

These days, a capacity grid of around 60 cars take on the Spa circuit through day and night for the ultimate prize in Belgian motorsport. Like the Nürburgring 24 Hours, the 24 Hours of Spa has benefitted greatly from the addition to SRO-regulated cars, with the three classes in the race now made up entirely of GT3 cars from the Blancpain GT Series. With no significant difference in pace between the fastest and slowest car on the grid, the drivers at the front have to work extra hard to fight through the hordes of traffic. As a result, the cars that cross the line on Sunday afternoon after 24 hours of racing always look incredibly beat up because the competition up front is so fierce. In recent years, the race for the overall lead has been decided within the final few hours, with the adverse conditions at the circuit often taking their toll on even the most sophisticated examples of modern GT machinery in the closing stages.

Plenty of factory-backed teams are due to be on the bill for this year’s race, showcasing the latest and greatest cars that SRO-sanctioned racing has to offer. The 2016 edition of the race has the mouth-watering prospect of having McLaren, Bentley, Audi, Mercedes, Porsche, Nissan, BMW, Ferrari and Aston Martin-backed squads in attendance.

When you’re there, spectating up-close at Spa for the 24 has a unique charm. Unlike the Le Mans and the Nürburgring 24 hours, you can walk the entire way round the 4.3-mile circuit as a fan, visiting both the inside and the outside at various points with relative ease. Many of those in attendance spend the first half of the race doing a complete lap. They start on the start/finish straight grandstand and end up at La Source before taking a rest during the early hours of Sunday morning and coming back as dawn breaks to do the same again but in reverse, seeing the cars cross the line at the end of the race. Food options away from the main paddock are limited though, so packing your own food is advisable if you plan on spending much of the race out in the forests.

The night hours of the race are particularly special. We all know Spa is a picturesque circuit in the day, but seeing over 50 cars it the pitch black, flying up Eau Rouge, with flames spitting out the exhausts and brake discs glowing is incredible. It’s the Spa we all know from watching Formula One and the WEC on TV, but on an another level.

Standing atop the hill on the outside of the no-name corner heading down to Pouhon is also extraordinary. On a clear night, you can see cars passing through areas as far the Bus Stop from certain vantage points. With Travel Destinations you have the choice of camping at a private site towards Stavelot, or staying at a hotel in Malmedy. It’s quick and easy to access the track by calling a cab, or taking a short car ride throughout the race and its build up, because it has far fewer fans than a place like Le Mans.

For everyone standing trackside, it has a far more relaxed feel than the other marquee endurance races, but that doesn’t in any way detract from the experience.

The Spa 24 Hours capture’s everything that’s appealing about watching an established race at a legendary circuit like Le Mans or the Nürburgring, but without huge crowds, sometimes limited spectator access and necessity to take a whole week off work to see the event.

If you’ve not been to Spa for the 24 Hours, as an endurance racing fan it simply must be done.

It’s a motorsport event that deserves your attention.

Follow this link for more details of how you can join us at the Spa 24 Hours this July!