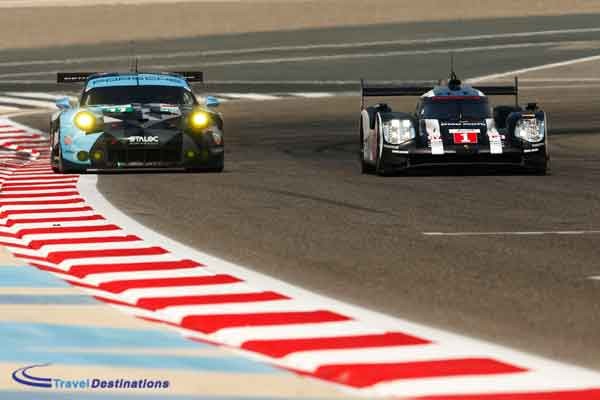 Our man in the stands has just returned from Bahrain, following the last round of the FIA World Endurance Championship. Below are a selection of his thoughts following what was a memorable and emotional race.

Audi bows out in style
Audi could not win a title in its final season of LMP1 racing, but they did manage to win one final race. In true Audi fashion, the No.8 R18 of Oliver Jarvis, Lucas Di Grassi and Loic Duval dominated the 6 Hours of Bahrain, headlining an Audi 1-2, giving the team one final hurrah before its 18-year Le Mans prototype programme came to an end. It was an incredibly emotional weekend all round for all those connected to Audi, with tributes to the team aplenty throughout the meeting courtesy of both the race organisers in the FIA and many of its competitors. Toyota in particular were as classy as ever, sporting tributes to Audi on the nose of their TS050s, and getting its team to hold a banner which read “Thank you Audi. We will meet again, some time, some where.” on the final grid walk of the season. The WEC came together as one, and in the fairest way possible, gave Audi a worthy send off. Then, once the race got underway, both the R18s raced off into the distance and were unchallenged past the first hour of the race. All season long the the 2016 R18 has proven to be the quickest of the three hybrid LMP1 chassis, but also the most unreliable. In Bahrain though, that was not the case, as the pair of Audis ran faultlessly for the duration, finishing the race over a minute ahead of the No.1 Porsche. The result left everyone wondering what could have been, had Team Joest been able to replicate such dominant performances earlier In the year.

Alonso states his intentions
It appears that Audi’s sudden departure has done little to effect the attractiveness of the FIA WEC to world-class drivers, as two-time Formula One World Champion Fernando Alonso all but confirmed his intention to drive for Porsche at the end-of-season FIA WEC Awards Ceremony. In a tribute video to mark the end of Mark Webber’s driving career, a personal message from Alonso was shown on the video boards at the gala, in which Alonso said: “You’ve had a fantastic career and now all your success with Porsche. You didn’t wait for me there, it would have been nice but you’ll still be around and I will ask you many things when I join your adventure.” Fernando Alonso joining the party would give the FIA WEC a huge boost at a time when it’s in dire need of a good news story. He would bring not only talent, but a wealth of publicity to the championship, which could go a long way in attracting further manufacturers into the LMP1 H class.

Aston Martin almost completes the triple
While Aston Martin Racing left Bahrain with a pair of GTE Pro championships, the team at one point looked to have all three sewn up. At the halfway point of the race, Aston’s pair of Vantages were running 1-2 at the head of the field, until a wheel came off the No.97, forcing Darren Turner to pit the car for repairs. The result was AF Corse taking the Manufacturers World Cup for Ferrari with a second and fourth place finish.

Nevertheless, it was a great result for the British marque, which after five years of trying, now has championship wins to show for its efforts. GTE Pro this season was a strange one, with Balance of Performance rows aplenty and on-track battles frankly too few and far between. But Aston Martin Racing proved that you don’t need a turbo-powered car to win in GTE, and that a budget like that of Ford’s doesn’t necessarily ensure you are any more competitive than the next team. Ultimately, that’s exactly the philosophy that the FIA and ACO are trying to achieve.

Regulation freezes
Audi’s withdrawal from the sport has already started to send shockwaves across the sports car racing world. The first notable one coming last weekend when the ACO announced that the current LMP1 H regulations will be frozen until 2020. That ensures that costs are kept down due to development and testing restrictions, put in place, presumably to keep Toyota and Porsche coming back for more. It also means that running a third energy recovery system with a 10 megajoule package is now not on the horizon. Will it attract any new manufacturers? That appears unlikely unless there is a real cost-capping system in place. Never say never though.

The unlikely champions
When all was said and done on Saturday night, Marc Lieb, Romain Dumas and Neel Jani were crowned champions, despite failing to finish on the podium in the six races after Le Mans. The trio in the No. 2 Porsche scored consistently throughout the year following their triumphs at Le Mans and Silverstone, but never found the combination of pace and luck needed to claim more silverware from the series’ trip to Germany onward. Nevertheless Porsche are worthy champions, and their championship represents the spirit endurance in almost every way. The No. 2 car battled issues, incidents and rotten luck to finish every race with points, and cruised home to take the title at Bahrain sixth after an early puncture put them three laps down. What will be interesting though, is what the future holds for all the Porsche drivers, as there have been rumours swirling about that the Porsche lineup will feature some new names for the 2017 FIA WEC season.