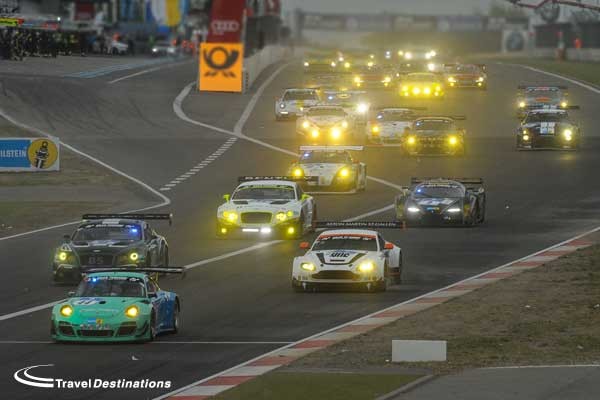 We asked Stephen Kilbey from Dailysportscar to try and explain why going to the Nurburgring 24 Hours is a must for all race fans. Stephen has lots of experience of visiting the best circuits around the world so is the ideal person to give his opinion.

“24-hour racing on the full Nürburgring Nordschleife was always somewhat of a hidden gem outside of Germany before the early 2000s, but that’s quickly changed. The evolution of GT regulations in recent years has meant that it’s become an increasingly more internationally recognised motorsport mega-event year-on-year, featuring racing supported by a plethora of manufacturers and top-class drivers.” “It’s fair to call it the hardest race on the planet to win. And it’s such a mentally and physically draining event to compete in, that it will leave you in awe standing trackside.”

“The main draw of spectating at the N24 over watching it on the TV is that the circuit is so vast, that it can take you 24 hours to get round all the spectator zones. It’s a unique experience exploring the Nordschleife, but that’s part of its charm and the reason why most hardened fans make the trip every year. The circuit features just about every type of corner you can imagine, and the views you’ll get to see of them as an attendee are staggering.”

“It’s an incredibly fan friendly event in that respect, as you can get incredibly close to the cars at certain parts of the lap, and enjoy the company of the colossal amount of other people there to celebrate what’s now considered to be a true celebration of motorsport in Germany.”

“It can be hard to navigate the circuit at first, so definitely grab a map of the roads and spectator areas before the race and plan a route to stick to. Once you get the hang of the perimeter roads and shuttle bus system though, you’ll realise that it’s not that difficult to find good places to watch from.” “Staying at Camping am Nürburgring I can say from experience, makes it much easier if you haven’t camped at the N24, the camping in the forests can be chaotic and require you to get to the track and set up long in advance if you want a good space. The N24 can seem like an overwhelming race to attend and camp at because of its scale, but the site Travel Destinations offers is situated in one of the more peaceful and stress-free areas of the Nürburgring in terms of accommodation: the bottom of the GP loop.”

“By staying there, it’s a more structured and organised camping experience. Camping am Nürburgring is a site that’s open year round, and run by a very friendly group of people. Not only do you get easy access to on-site food and entertainment there, but you’re also in walking access to circuit from your pitches. Being close to the GP loop paddock and main grandstands is especially handy too; as it’s the best place to watch the start and end of the race.”

“My advice? Soak up the grid walk before the race (which is free for ticket-holders), dash to the Bilstein Tribune at Turn 1 while the cars are on the parade lap and witness the roar of the cars come past in batches for the first time. After that, head on to the Nordschleife and soak up the atmosphere that the core German fans create. Fireworks, barbecues, crazy scaffolding setups – you name it, the people who attend regularly build it. Pflanzgarten, the Karussell, Brünnchen and Hatzenbach in particular are all astonishing places to watch a motor race, so if you can, try and make it to those areas to really see the cars and drivers work hard.” “You’d be hard pressed to find a better place to drink alcoholic beverages, eat good food and watch cars than the Nürburgring. I think you’d be incredibly unlucky to leave the circuit after the race disappointed. If you love endurance racing, the N24 is a must-see bucket list event and now is as good a time as ever to go. This year, Bentley, Aston Martin, Mercedes, Porsche, Audi and BMW will all be present with factory-backed machinery, so the racing is set to be spectacular. If you’ve never stood in the forests of the Eiffel region and witnessed 150+ cars GT and touring cars race through the night, then you really do need to…”

Travel Destinations can offer you a great chance to be at this year’s race. We have limited availability for our travel, ticket and camping offer from the 26th – 30th May. Travel Destinations have a private area reserved within the Camping am Nurburgring area reserved exclusively for our customers and managed by our staff. Book your place now by calling our reservation staff on 0844 873 0203.