In 2021 the 56th running of the Grand Prix l’Age d’Or will take place at Dijon-Prenois. Since 2014 it has been held at this circuit, which is famous for hosting the French Grand Prix between 1974 to 1988. At that time the GP alternated each year between Dijon and Paul Ricard. The history of the Grand Prix l’Age d’Or (Golden Age) dates back to 1964 when it was held on the Rouen-les-Essarts circuit. In 1969 it was then hosted at the famous banked Montlhéry circuit just south of Paris, the event remained there until it moved to Dijon.

Expect to see Endurance race cars, sports cars, touring cars and Formula 2 single seaters. As well as the amazing 2.0 litre cup Porsche 911 SWB series, which has risen to huge success. Another hugely popular series is the Global Endurance Legends where you can see 90’s Le Mans cars flat out around this undulating French circuit.

Our tour departs from Folkestone on the Eurotunnel on Thursday morning. We will drive down to the Champagne region, via a route taking us through the heart of the vine yards. We stay in Troyes this evening at the four star Mercure hotel, parking in their underground car park is included. Dinner is included this evening too.

On day two your roadbook will take you via an attractive d-road route into Burgundy. We stay in Gevrey-Chambertin at a charming hotel on the edge of the village, for three nights. The hotel has a cosy wine bar and lounge and the bedrooms are very comfortable. It’s a short walk into the village where there are numerous restaurants and bars. Race tickets are included in the package. 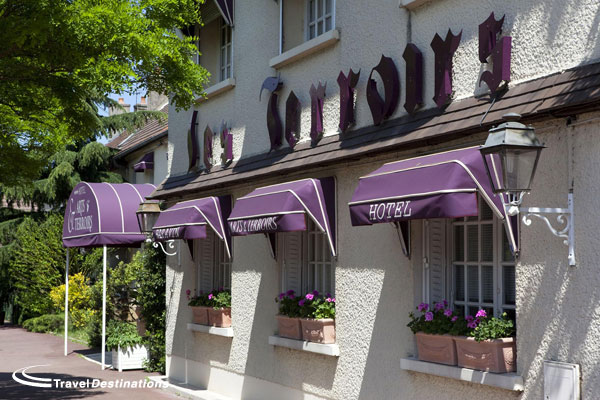 A family run 4 star hotel that situated just a short drive from the circuit and within walking distance to a variety of great restaurants.
Call our experts to book 01707 329988
View all our events