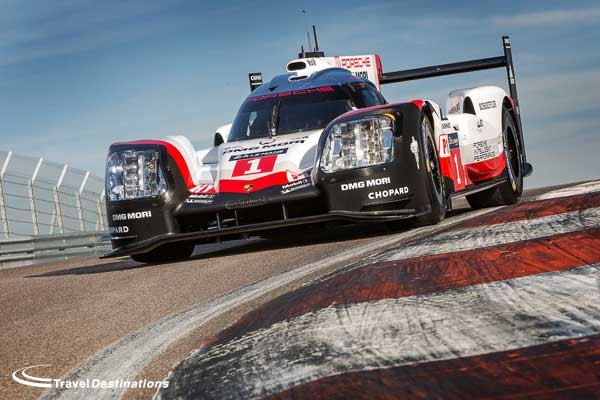 This last weekend saw the FIA World Endurance Championship Prologue take place at Monza. This was a first chance for the public and the media to see this season’s cars on track and it revealed some insights in to what we may expect in the forthcoming FIA WEC season. As ever, our man in the stands was trackside in Monza and has filed his latest report.

The 2017 LMP2s flexed their muscles
Last week at Monza, for the first time in a public setting, the new breed of LMP2 cars were shown off, and they didn’t disappoint. The new LMP2s are quick, look sleek and are being driven by arguably the best crop of drivers in the category’s history this year. While the FIA WEC LMP2 class doesn’t have any variety in chassis, it won’t detract from the racing. At Monza, the Oreca 07s – in their high downforce configuration – all managed speeds close to 200mph with their Gibson engines, with the best lap time – Bruno Senna’s 1:36.094 – eclipsing the 2008 LMP2 pole time by almost a second. And when it comes to the full season, we expect that figure to rise, especially at Le Mans, as at the Dunlop test before the Prologue one team managed to reach 220mph in the high downforce package. Who knows what can be achieved down the Mulsanne straight this year?
Either way, the important thing to note here is that the LMP2s are likely to be quicker than LMP1 cars in a straight line, which could provide some hairy moments in heavy braking zones. Those images of LMP1 cars skipping past the LMP2 field may be just memories of seasons gone by.

Porsche’s new GTE car impresses
Porsche’s new 911 RSR GTE car continues to impress. It is reliable, and notably fast. Michael Christensen set the quickest time of the Prologue – a 1:47.379 on Saturday – as the team consistently sat at the top the timing screens. The car also ran without any hiccups, racking up a ton of mileage and getting its drivers even more tuned into its new characteristics. While testing times win no awards, they are an indication of what  we can expect to come. For this year the Balance of Performance system has been overhauled for the GTE Pro teams, and at Monza the cars were running with their baseline BoP. So it is first blood for Porsche GT Team heading into Round 1 at Silverstone next week.

LMP1 reliability
Both Porsche and Toyota’s new LMP1 challengers were officially unveiled at Monza and initial signs were good; Not only in their continued advancements in hybrid technology, but in their ability to complete long runs. All four factory LMP1 hybrids on show managed to complete well over 1000km of running over the two days, with the No.2 Porsche 919 clocking up the most mileage from 327 tours of the circuit, which totaled just a fraction under 1,800km. None of them spent any extended periods in their garage aside from during the thunderstorm on Saturday night, and aside from a couple of brief technical hiccups, there were no dramas on track either. The preparation from both Toyota and Porsche in the off season therefore looks to have paid off, with Porsche confirming it had completed at least one 24-hour test, and Toyota stating that it had completed four 30-hour runs.

After last year’s shaky start to the season on the reliability front, this year could be a turn around, and the races at Silverstone and Spa could turn into sprint races rather than races of attrition & constant niggles.

Dunlop makes further GTE gains
Dunlop has drawn in more interest in the GTE side of its endurance commitments, with both Dempsey Proton Racing and Gulf Racing making the change away from Michelin tyres for this season. Last year Aston Martin Racing took the risk and ran with Dunlop tyres, which at the start of the season left the two Vantages in the GTE Pro class heading into Le Mans with consistency, but not much to show for in the outright pace department. From Mexico onwards though, and with a new compound, Aston Martin made incredible strides, winning races and eventually the Drivers and Teams championship. For this year, Gulf Racing and Proton Racing are hoping for similar results in GTE Am, as their 2015-spec Porsches – and Aston Martin’s No.98 entry – take on the likes of Spirit of Race and Clearwater Racing with their different sets of rubber. The WEC’s GTE tyre war is now in full swing, and should be fascinating to keep tabs on as the season progresses. Monza magic impressed the paddock
This year’s trip to Monza was the first for Le Mans Prototypes in an officially sanctioned event since 2008, and it was greeted positively up and down the paddock. Not only is it a circuit which everyone enjoys making the visit because of its history, but it is a valuable place to test on too. The Paul Ricard circuit, where the Prologue took place in previous years, is hard to test on because of its hard winds and unique surface which is tough to read when It comes to tyre testing. Monza meanwhile provides a good simulation for the teams ahead of Le Mans, and it showed, as most teams made the most of the chance to run their cars on both days.

Fans turned up in their droves too, making for an extremely busy pit walk on both Saturday and Sunday, and giving the grandstands a bit of an atmosphere at times. There’s certainly a case for Monza being put onto the full FIA WEC calendar for a race in the future, which would prove popular with the series’ increasing supporter base.

The FIA World Endurance championship begins with the 6 Hours of Silverstone over the Easter weekend. You can also join us for the following rounds at Spa-Francorchamps in May and then the Nurburgring in July.