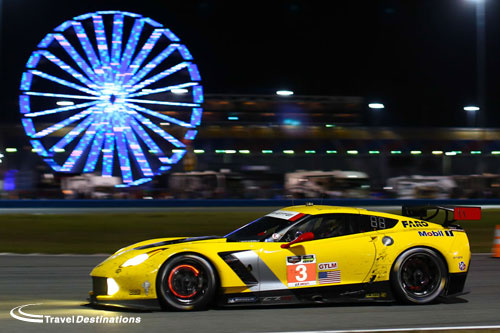 The Tudor United Sports Car Championship and the Tequila Patrón North American Endurance Cup debuted with a record crowd and a thrilling finish in the 52nd Rolex 24 At Daytona. The race was won by Joao Barbosa, Christian Fittipaldi and Sebastien Bourdais in the No. 5 Action Express Racing Corvette Daytona Prototype. A late yellow flag set up a 10 minute sprint to the chequered flag. A potential ‘feel good’ story was in the making with two-time Rolex 24 winner Wayne Taylor (out of retirement for a final opportunity to co-drive with sons Ricky and Jordan) challenging for the lead. But Barbosa, at the wheel of the Action Express Racing Covette DP, was not to be denied, coming home for his second overall victory at Daytona in five years. A 1.461-second margin of victory was all the separated the cars. He won his third Rolex Daytona watch (he also won in class in 2003), while Fittipaldi took his second (overall in 2004) and Bourdais, a four-time Champ Car World Series champion, won the event for his first time. The race was marred in the early hours by a horrific crash when Memo Gidley, driving the pole-winning No. 99 Gainsco Corvette Daytona Prototype, rear-ended the stranded No. 62 Risi Competizione Ferrari F458 Italia driven by Matteo Malucelli. Both drivers were taken to nearby Halifax Hospital, where they received extensive treatment. The race was red-flagged for nearly an hour after the incident. The 2014 race featured 52 lead changes in 24 hours, with the winning Action Express team leading 18 times for 313 laps, with the Wayne Taylor Racing team leading 12 times for 228 laps. The winning team completed 695 laps on the 3.56-mile circuit, covering 2,474.2 miles for the team owned by Daytona Beach businessman Bob Johnson. “Bob was convincingly, absolutely dead sure we were going to win it,” Bourdais said. “And he was right. The guys were prepared. Everybody knew exactly what to do and how to do it, and the execution was perfect. What can I say? It’s a dream come true.”

The Taylor family’s dream was dashed by Barbosa’s great jump on the restart with four laps remaining.
“I tried everything to find a good balance, a good run,” Angelelli said. “But I didn’t have enough for him. I thought I had (enough) when I picked up the car for the final two stints. But the final rush, unfortunately not.”

While the new Corvette C7.R that raced in the GT Le Mans class and its street counterpart, the Z06, opened the event with a great fanfare, the Corvette DP flexed considerable muscle of its own by sweeping the top four positions overall. Brothers Burt and Brian Frisselle joined John Martin and Fabien Giroix in the third-place No. 9 Action Express Corvette DP, followed by Richard Westbrook, Michael Valiante and Mike Rockenfeller No. 90 Spirit of Daytona Corvette DP. Three months after setting the all-time speed record on the 2.5-mile Daytona tri-oval, Colin Braun took his first Rolex 24 victory in Prototype Challenge. Braun swept to a one-lap triumph in the No. 54 CORE autosport Oreca with Jon Bennett, Mark Wilkins and James Gue. “We worked really, really hard to come up with a plan that we wanted to stick with,” Braun said. “We came prepared this weekend and executed our plan, down to being fastest in the opening two practice sessions, winning the pole and I think we led the most laps.” If you would like to be at the Rolex 24 at Daytona or the 12 Hours of Sebring in 2015, you can be the first to learn more details by registering with us via info@traveldestinations.co.uk