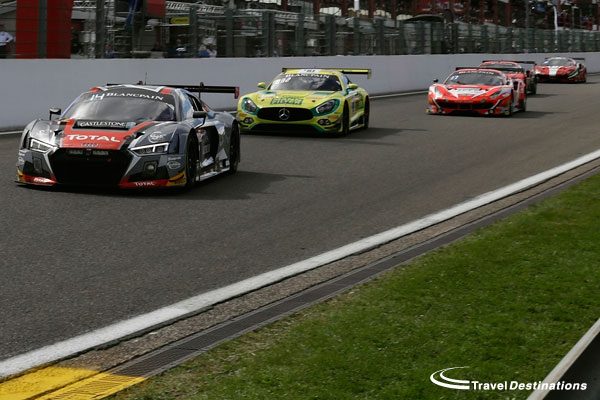 Travel Destinations guests at the Spa 24 Hours were blessed with good weather for this year’s race and the action on the track didn’t disappoint either. There was a close run race and plenty of talking points for our man in the stands to discuss afterwards. Here are some of the highlights from that discussion.

Another one in the books for Audi
Team Sainteloc’s victory in last weekend’s Spa 24 Hours was nothing short of spectacular. The team’s trio of Markus Winkelhock, Christopher Haase and Jules Gounon battled through sunshine and the showers, day and night, fending off the best that Bentley, Mercedes, Ferrari and Porsche had to offer to score Audi its fourth Spa 24 Hours win. As remarkable as the French factory-blessed team’s win was, what was more impressive, was the performance of the car. The Audi R8 LMS, which to many, will still feel like a new kid on the block, is actually well into its life-cycle, and continues to impress on almost a weekly basis around the world, but consistently in longer races. The win means that the R8 LMS has won both big European 24-hour races in 2017, following Land Motorsport’s emphatic Nurburgring 24 Hours triumph. The R8 LMS almost won the Rolex 24 Hours GTD category too, after a late charge by the aforementioned Land squad at the end of the race.

It’s portfolio continues to pad out, as does Audi Sport customer racing. With BMW already bringing an evo kit to market for the new M6 GT3 this year, and Aston Martin developing a new GT3 model, Audi is sticking to its guns. As the R8 LMS fifth season approaches, it looks just as good as it did on its debut back in 2014, when it stormed to victory at the Nuburgring. It is an incredible car, which will go down as one of the most successful in GT3 history.

Bad luck for Bentley
Another year and another near miss for Bentley. Once again, the British marque finished just shy of the win, but in very different circumstances to last year when weather at the end of the race cost the team its lead. This time around its lead Continental GT3 charged into the fight for the win in the closing stages due to good pit work, and incredible driving for Maxime Soulet, Vincent Abril and Andy Soucek. It was a hard pill to swallow for the M-Sport crew, to again miss out on winning the car its first big endurance race, but nevertheless it was a promising performance. Soulet at the end of the race piled the pressure on the leading Audi, closing the margin to just seven seconds in the final minutes, but the traffic,  which is always a factor at Spa, played a big part in deciding the final outcome. On raw pace there was really nothing between them. The Continental GT3’s tenure as Bentley’s marquee GT3 is clearly coming to a close, and despite numerous attempts to win the Spa 24 Hours, Nurburgring 24 Hours and Bathurst 12 Hours, it has yet to sit on the top step at any of them.

Maxime Soulet, Vincent Abril and Andy Soucek now lead the Driver’s title race, and the M-Sport team now leads the Team’s Championship in the Endurance Cup. A big championship win in what will likely be its final season is now likely the only chance left of a fond farewell to the Crewe-based marque’s first GT3 project which has been a fan-favourite from the get go.

Team Bernhard has a future
In the Pro class, Porsche had just one team representing it. It wasn’t the usual Manthey, or even Herberth Motorsports for that matter. No, it was Team75 Bernhard making its 24-hour race debut with its 911 GT3 R. Driving the car were works drivers Michael Christensen, Laurens Vanthoor and Kevin Estre, and they were predictably superb. The team though, was an unknown going into the race. Owned by Timo Bernhard (Le Mans winner and all-round top talent) the team had only competed in ADAC GT Masters sprint races in Germany heading into the weekend, but with Porsche’s support they were on fine form, and kept the Stuttgart-based marque in the running for the win all the way to the finish, eventually finishing third overall. They genuinely could have won it too, as without a three-minute stop-go penalty for causing a collision in the early stages, they would have been almost a lap ahead of the field. There looks like a real future for Timo’s team, which is aiming to become a full factory squad in the years ahead.

Misery for McLaren
While Porsche, Audi, Mercedes and Bentley all had good to great runs in the Spa 24 Hours, McLaren’s effort was much the opposite. Strakka Racing brought its quartet of 650S GT3s, and last year’s Endurance Cup Champion Garage 59 brought another, to make it a five-pronged attack for the Woking brand. But none of them featured in the running on pace throughout practice and Qualifying, and in the race only briefly looked competitive. Four of the five failed to make it into the final third of the race; Strakka’s entire fleet retiring for one reason or the other, leaving a delayed Garage 59 650S GT3 in the AM class to bear the flag for the marque. But Chris Harris, Alexander West, Bradley Ellis and Chris Goodwin could only do so much, after a problem in the pits and a collision out on track left them over 10 laps down on the other Am class runners. In the end the quartet came home last in the class and second to last of the classified runners.

It’s been an extremely tough season for Strakka Racing, which is still clearly adapting to GT racing after years in prototypes. It is not the drivers, as it’s stable is littered with McLaren GT’s young guns and factory drivers, instead it has appeared to be a mixture of rotten luck, and a struggle to work with the current Pirelli tyres, which has left the team flailing. Thankfully there is still a couple more chances this season to score a good result. A win, or even a podium before the end of the Blancpain season would go a long way to keeping the morale up.

There is life in the old Aston yet
Leading early, and eventually finishing second, the Oman Racing Team Aston Martin Vantage of Euan Hankey, Le Mans-winner Jonny Adam, Ahmad Al Harthy and Salih Yoluc enjoyed a whirlwind of a week at Spa racing in the Pro-Am division. Much like its GTE brethren, the GT3 version of the Aston Martin Vantage has been around a long time, lacking customers globally now, as the brand prepares for its next GT3 machine to go to market. But with its incredible build, performance, and design, coupled with today’s Balance of Performance, it is still competitive. Scoring Pro-Am Pole and staying in the fight for the Pro-Am victory throughout was a sight to see, the Oman Racing squad run by TF Sport running like clockwork throughout the event. Not only was the podium a success in itself, but the strong run also sealed the Blancpain GT Series Pro-Am Drivers’ title for Adam and Al Harthy and the Teams’ title win for the Oman Racing Team with TF Sport. A great effort for this retiring Aston.

The Spa 24 Hours will return from the 26th – 29th July 2018. Travel Destinations will have hotel and camping offers available for the race. Please register now via info@traveldestinations.co.uk to receive more information.