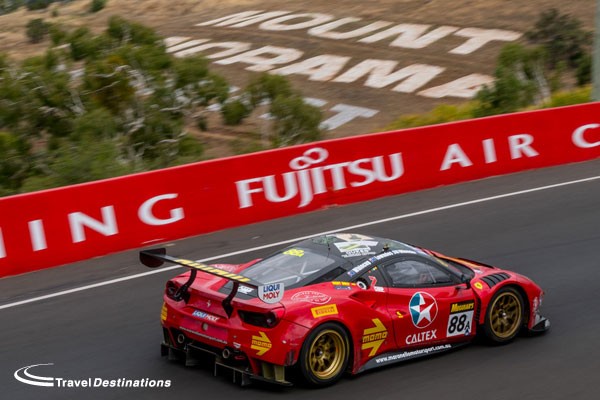 The 2017 Liqui-Moly Bathust 12 Hours continued its growth this last weekend, with a record 40,000 spectators glued to the action trackside. Along with the ever growing international audience on TV, radio and the live streaming on the internet, there is no argument that the Bathurst 12 Hours is an event not to be missed. Our man in the stands looks back at the action from this year’s race and picks out his highlights.

The success of the Top 10 shootout
It doesn’t get much better than seeing drivers run flat out in GT3 cars on Mount Panorama. The circuit lends itself well to hot laps with its tight, technical and dangerous nature. That’s why this year’s Top 10 Shootout to decide the front of the grid before the race was such a huge success. In the “new-for-2017” format change, the top 10 cars (after the pair of standard qualifying sessions) each got a single lap to try and score pole position. What resulted was a dramatic half a hour of action, with ten of the world’s best sportscar/GT/Supercars drivers pushing their cars to the limit; with Maranello Motorsport’s Toni Vilander (more on him later) eventually emerging on top. The format of the Bathurst 12 Hours and its regulations have evolved over the past 10 years, and most definitely for the better. The addition of a Top 10 Shootout only added to the event’s spectacle.

What could have been for Tekno?
Come race time, there were countless storylines, though the big talking point early was the rough weekend for reigning Bathurst champions Tekno Autosports. Tekno Autosports’ fielded a pair of Mclaren 650S GT3s gunning for the win in the Pro class once again. But it didn’t go to plan for the 2016 winner. The No.59 crashed out in Qualifying with McLaren GT’s new Driver Academy young gun Ben Barnicoat at the wheel, and the No.1 had to start the race from the pit lane following an engine change overnight before the race. To make matters worse the No.1’s engine appeared to give out at the start of the second hour as Rob Bell was carving his way through the field. Bell nursed it back to the garage for repairs which cost the car three laps, which left the No.1 trio of Bell, Come Ledogar and Alvaro Parente having to fight their way back into contention for the remaining 10 hours of the race.

In the end, the car – remarkably – finished fifth overall, just one lap off the lead, after climbing as high as fourth in the closing laps. During Parente and Ledogar’s stints in the second half, the 650S GT3 was formidable in terms of pace, and came feet away from getting back on the lead lap and therefore in the running for the win. Had it not had its early issues, the No.1 would surely have been in the fight at the front.

Tough day at the office for van Gisbergen
Bathurst expert Shane van Gisbergen (who let’s not forget holds the circuit’s lap record after breaking it during Qualifying for the 12 Hour in 2016, before going on to win the race) had a weekend to forget this time round. Partnered with fellow Kiwi Craig Baird and Mercedes’ Nurburgring 24 Hours master Maro Engel, Van Gisbergen was in the running for the win for most of the race. The AMG GT3 the trio drove, for Scott Taylor Motorsport, was quick and extremely nimble through the constant flow of traffic, but it all turned sour very quickly in the closing stages. The team made a bold strategy call at the final pit stop to gain track position over the Maranello Ferrari by staying on old tyres. It left van Gisbergen just under five seconds ahead when he rejoined the race. Shane van Gisbergen pushed as hard as he could, but eventually Jamie Whincup on fresh rubber got the better of him – banging doors and with two wheels on the grass over the crest of the Conrod Straight.

Shortly after, out of sheer desperation, van Gisbergen made an error through the final chicane, pushing a lapped Porsche into the barriers and causing one final safety car period. For that he received a penalty – which would have ended the team’s chances – but moments before the team were set to radio him with the bad news after the restart, van Gisbergen nose-dived the wall at The Dipper before grinding to a halt in the middle of the track on his way back to the pits. It was far from his finest hour.

Engel’s outburst
Shanve van Gisbergen’s mistakes at the end of the race didn’t go down well in the Scott Taylor garage, as you would expect. But van Gisbergen’s teammate Engel emerged as the most frustrated of the bunch. In what turned out to be one of the most eye-opening sequences in recent memory, Engel was seen storming into the team truck, kicking tyres and slamming doors on his way. The German was then pulled aside for a TV interview, where he openly criticized his teammate.

“It’s not motorsport in my book,” he said. “Um, yeah, gotta watch out what I’m saying. All I’ve seen this weekend is a lot of mistakes by Shane. Yeah, it’s a tough one.” It made for an explosive final chapter to what was already an explosive race.

Vilander’s incredible drive
If there’s anyone who shone this year at Bathurst, it was Toni Vilander in the winning Maranello Ferrari. The Finn, who was an architect in the team’s second overall win in the race, ran faultlessly throughout and put in one of the most incredible stints in GT racing history. With the race on the line in his final stint, Vilander was forced to drive economically to reduce the time of the final pit stop, and create a healthy lead to reduce the other cars’ chances of winning. And he did just that, creating a gap to the field with a series of hot laps off the penultimate restart, which in turn prevented Alvaro Parente in the aforementioned Tekno Mclaren getting past and back onto the lead lap. He was visibly quicker than all the other contenders and was both aggressive but controlled through traffic. His performance secured the lead for the team when it mattered most and ultimately forced HTP into making its make-or-break decision on tyres. He, and the entire Maranello team, very much deserved the win.

If the action at this year’s Liqui-Moly Bathurst 12 Hours has whet your appetite then you can join us at Mount Panorama in 2018. Our exclusive package includes hospitality at the circuit, accommodation in Bathurst as well as a hire car to enable you to get around. The Bathurst 12 Hours 2018 will be a book early to avoid disappointment event, so to be one of the first to learn more about our exclusive 2018 offer, please register your interest by emailing us now.