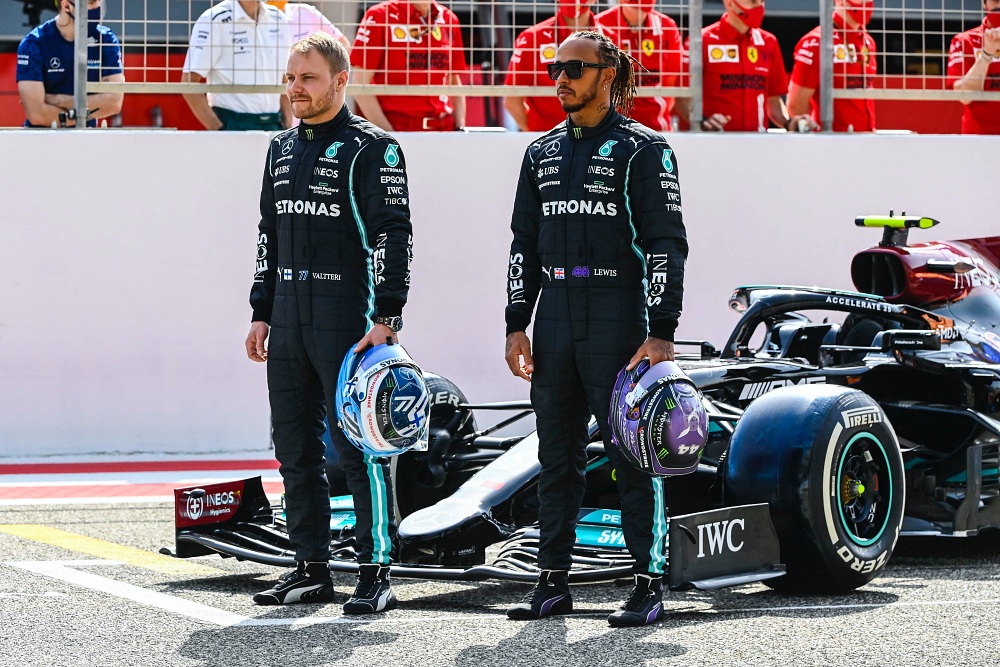 With Travel Destinations now selling Formula 1 Packages to fans, a periodical Formula 1 column will feature on the website from now on, packed with analysis of the world’s premier form of motorsport.

The first column looks ahead at the 2021 season after the pre-season Bahrain test, where Stephen Kilbey wonders if anyone is up to the colossal task of beating Mercedes, and Lewis Hamilton to the Formula 1 World Championship crown?

The big question on every Formula 1 fan’s mind this year is can anyone match up to the juggernaut that is Lewis Hamilton and the Mercedes F1 team? Years of dominance have solidified Hamilton’s place among the greats, in the pantheon of F1 drivers, and with the start of the new regulation cycle pushed back to 2022, many are expecting more of the same this year, as all the teams on the grid are running evolutions of their 2021 chassis.

However, testing in Bahrain ahead of the season opener at the Sakhir circuit has sprung a few surprises, and led some within the paddock to believe that a shake up of the running order is more likely than one might think.

Let’s consider Mercedes first. The big headline from the the three days of testing was its lack of running due to reliability issues. Mercedes completed the fewest laps of any team, and more than a hundred fewer than Alpha Tauri, which managed an impressive 422. Not only that but the raw pace wasn’t there either. Both Lewis Hamilton and Valtteri Bottas appeared to struggle with getting up to speed with the new characteristics of the W12, Hamilton in particular having a couple of uncharacteristic spins. The result was a best time of 1:30.025 on Day 3.

Now, testing is never a true indicator of form. Each team was running to its own plan, with different fuel levels, a variety of set ups and completed different stint lengths on different tyre compounds. This means reading too much into lap times is most certainly going to be a mistake, especially in this year’s pre-season which was been reduced to just three days of running. Does anyone expect the likes of Alpha Tauri to be top of the shop this weekend? No, not yet at least. There’s a long way to go before the midfield teams that made the headlines in testing can prove their worth at the front of the field.

Keen F1 fans will remember the 2019 pre-season test, where Ferrari appeared to have the pace over Mercedes in Barcelona, and Hamilton and Bottas looked vulnerable. That was the last time Mercedes ‘struggled’ in testing, and that didn’t translate at all once the season began, the Silver Arrows winning 15 of the 21 races and both titles.

Perhaps the most important aspect of testing to follow as an observer not directly involved in the sport is the general mood and vibe of each team. Body language and atmosphere can tell you a lot about a team’s performance in testing, without looking at the lap times. And that’s not just applicable in Formula 1, it’s evident in any area of the sport.

A team will have a run plan going into a test, and an expectation of how the car will perform after a rigorous development cycle. If putting tyres on tarmac and putting said car through its paces springs surprises and more than a handful of new-car niggles, then behind closed doors, a team will know it’s in trouble before competitive sessions begin. This works both ways. Remember Brawn GP’s 2009 Tour de Force? The team knew quietly in pre-season testing that its car was far and away the best on the grid, and did its best to hide that performance before the teams went to Melbourne. Testing in public is just as political as the racing itself, this should never be forgotten.

So is Mercedes sandbagging at this stage? Don’t for a second rule it out, but also, don’t rule out the other teams that have shown real potential. It is unlikely that the Mercedes freight train falters this year, so expect Lewis Hamilton and Valteri Bottas to be fighting for wins at every Grand Prix, as they have done in recent seasons. The variable this time could be whether or not any of the other teams on the grid have closed the gap enough to consistently challenge.

On the face of it, Red Bull Racing genuinely looks like a threat with its Honda-powered RB16B and 1-2 punch of Max Verstappen and Sergio Perez this year. In recent campaigns the Red Bull chassis have proved tough to drive, and suffered from strings of inconsistent results, ultimately costing the team’s number 1 driver Verstappen a chance at fighting for the title.

But the RB16B appears to be an all-rounder, something which will be a welcome sign for Christian Horner and the members of the team’s top brass on the pit wall. It looked ‘planted’ and set the fastest time of the test, a 1:28.960. Even more promising was the feedback from Red Bull’s drivers. Both appear confident and cautiously optimistic about the car’s abilities and seem as prepared as anyone for the season ahead after just three days behind the wheel.

Put simply, Red Bull must ensure that it picks up podiums on weekends where its car doesn’t set the pace. If it is to have a chance of winning either the Driver’s or Constructor’s titles then it cannot throw away points on weekends where it faces an uphill battle. Verstappen also has to step up to the plate and prove himself as a championship-winning driver.

Lest we forget that Red Bull’s prospects pre-season bodes well for its sister team Alpha Tauri too, which had an extremely productive test with fast times and the most mileage of any team.

If the 2021 Honda RA621H engine, in the Japanese manufacturer’s final year before Red Bull takes the engine development in-house, proves to be fast and reliable, then Pierre Gasly and F1 debutant Yuki Tsunoda can look forward to some standout results once again. Who knows, maybe the team can snatch another victory or two if things fall into place like they did at Monza last season?

So what should we make of the rest of the field?

Ferrari will always be in the limelight and under pressure to perform. It’s been a dismal run for Ferrari since its last title way back in 2008, and quietly the team is almost certainly focused on next season and the new regulations, rather than trying to win the title this year. Last year was a disaster, the SF1000 struggling for outright pace with an engine that wasn’t up to the task, so a big turnaround is unlikely

This year the Scuderia appears to have made strides with its new car, though it remains to be seen just how it will stack up to the Mercedes, Renault and Honda teams once the season truly begins. If its engine is up to scratch and the team has made gains in the aero department then Charles Leclerc and his new teammate Carols Sainz will be aiming for podiums and wins wherever possible. Meanwhile, Haas and Alfa Romeo – customer teams of Ferrari – will also be hoping fight for points throughout the season, in an attempt to become midfield challengers.

However, the teams not powered by Ferrari haven’t stood still in the off-season and there-in lies the problem. Someone has to finish last, and right now it’s not quite clear which team will struggle to get out of Q1 each weekend. The best guess would be Haas, especially as it is fielding two rookie drivers this year in Mick Schumacher and Nikita Mazepin. Haas does have a reputation of finding ways to punch way above its weight with limited resources though, so it shouldn’t be counted out just yet.

In order to put last season behind it, Haas will first need to overcome Alfa Romeo and the new-look Williams effort. Williams, while still unlikely to fight in the top half of the order, looks poised to make a big step in 2021. Its FW43B, with a striking new livery, represents the new era for the Mercedes-powered team, with the Williams family no longer part of the effort and the new owners in charge and ready for their first full campaign at the helm.

Williams’ success hinges on the talents of George Russell and his ability to extract the maximum out of a car. He’s a real talent, and one for the future. In what looks to be an incredibly important year for the young Briton, serving as an audition for a drive at a front-running team in future years, regularly fighting for points with what the team believes is an improved package is a must.

McLaren has slowly been improving under the direction of Zak Brown, and a first win since 2012 is surely the number 1 priority this term. Lando Norris and his new sparring partner Daniel Ricciardo are more than capable of challenging for wins, both are fast and ruthless behind the wheel and should make for quite a duo for the British team. After finishing third in last year’s Constructors’ standings, the desire is there to break into the top two. It won’t be easy, but if any team can manage it, it’s McLaren. The biggest factor here is the switch in engine supplier, will the move from Renault to Mercedes power provide the team a tangible boost in Year 1?

Aston Martin Racing meanwhile, returns to Formula 1 after a lengthy absence and a stream of successes in sportscar racing, replacing Racing Point on the entry list.

Racing Point’s Mercedes ‘clone’ from last year proved to be a race winner and allowed Lance Stroll and Sergio Perez to fight at the head of the field and score a famous win at Bahrain. This should bring confidence to the new-look team heading into this year. Team owner Lawrence Stroll has invested heavily in his outfit and looks to push it forward as a works effort with ample resources to fight for titles in the medium term. What we see this year may prove to be the foundation for this ambitious team’s future. Expectations are high, now it’s up to a revitalised and unshackled Sebastien Vettel and steadily improving Lance Stroll to deliver the goods.

The final team on the grid is Alpine (formerly Renault). The French outfit is the only team this year running with Renault V6 power, and it remains a mystery if this will prove to be an advantage or hinderance to its campaign. The A521 looks radically different in places to its predecessor from Renault last year and not just in the livery department (the airbox in particular is an eye-opener) and its driver pairing of a returning Fernando Alonso and Esteban Ocon mean business.

Want to experience the thrill of travelling to an F1 race this year? With Travel Destinations we can help you every step of the way! We currently offer packages to the Austrian, Belgian and Dutch Grands Prix and are looking to add further races to our portfolio in the coming months. Call us on 01707 329 988 or email info@traveldestinations.co.uk to find out more.