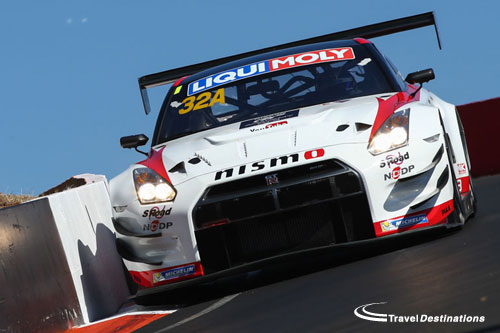 Damage and a long stay in the pit lane meant that, despite looking strong for the first eight hours of the race, the Erebus Motorsport No. 1 Mercedes could not defend its title from 2013. It eventually finished seventh and five laps down from the winners.

A more successful race was had by the No. 63 Erebus Mercedes, as they finished on the podium in third place, just ahead of the No. 37 Darrell Lea McLaren MP4-12C, who also finished on the lead lap. Craig Lowndes was at the wheel as the winning Ferrari took the chequered flag and he was joined on the top step of the podium by team mates Mika Salo, John Bowe and Peter Edwards. “We didn’t change brakes, [the car] was fading, but it was ok,” Lowndes said. “We had to give it a couple of pumps going into The Chase, very thankful the time ran out and we didn’t have to do another lap. I was doing my best, running on the inside lines, making the Mercedes go around the long way, thankfully we had enough.”

Salo dedicated the win to the late Allan Simonson, saying “this one is for Allan, there is nothing else to say, we miss him. This one is for him.” The event saw its usual level of competitor attrition, with several entrants even failing to make the start line, and only 28 of the eventual 42 starters made it to the chequered flag. After just five laps, the JBS Lamborghini collided with a kangaroo causing major damage, continuing a run of bad luck for the team at Bathurst, spanning several years.

The Clearwater Racing Ferrari 458 and the big fan-favourite Nissan GT-R Nismo GT3 saw their races come to a spectacular end after less than 3 hours, after a collision at the top of Mount Panorama caused irreparable damage to both vehicles. Even the races of the second and third placed Mercedes entries weren’t completely without incident, with the No. 84 car losing two laps early on during a lengthy pit-stop, and the No. 63 car carrying significant damage to the front bodywork for much of the race.

The hot weather and the newly resurfaced track were the weekend’s other talking points, with the air temperature topping 36.3 degrees centigrade on race day. The new surface was praised by all, and it contributed to a new lap record for at the Mount Panorama circuit, with New Zealander Shane Van Gisbergen setting a remarkable 2m 03.8506s lap in the McLaren 12C.

A total of 296 laps were eventually completed by the winner, with a total of five cars still on the lead lap at the end of the race. More than 1100 miles were consumed in the 12 hours with the safety car called upon on nine occasions (six less than 2013).

Porsche dominated Class B, with the Grove Group 997 GT3 Cup winning the class and finishing eighth overall. The Lamborghini Gallardo driven by actor Eric Bana and his teammates Hill and Middleton in Class B finished fifth in class and 13th overall. In Class F, the Fiat 500 Abarths crossed the line after 12 hours in a three-car formation finish, with the No. 96 car being the best of them, winning the class and finishing 18th overall. No small achievement.

The dates for next year’s event have been announced already, with the Bathurst 12 Hours scheduled for 6th – 8th February 2015. We will be there once again, so if you would like to join us at this great event, please register with us now viainfo@traveldestinations.co.uk