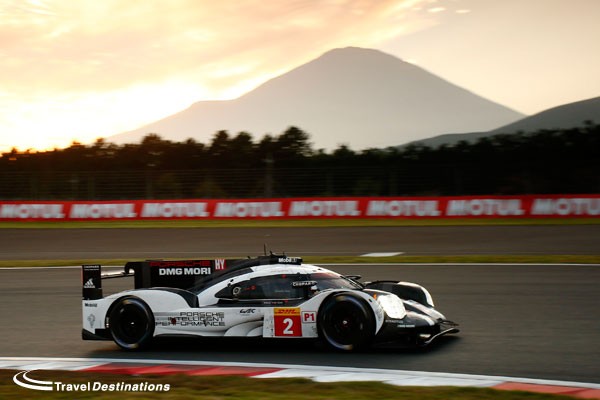 Just back from Japan, our man in the stands takes a look at some of the talking points arising from the FIA WEC 6 Hours of Fuji

The LMP1 manufacturers have never been closer
Qualifying ahead of this year’s 6 Hours of Fuji saw the best Audi, Porsche and Toyota laps all within two tenths of each other, and then all of them finish up the session within half a second. The result? A stunning race in which all three factory teams had a chance to win. Audi once again had the fastest car, but pit stop blunders ultimately cost the No.8 car of Oliver Jarvis, Lucas Di Grassi and Loic Duval the win. In the end it was Toyota’s No.6 TS050 that were victorious, with Stephane Sarrazin, Kamui Kobayashi and Mike Conway taking the win by under two seconds in the end, after a bold strategy call at the final round of pit stops catapulted the car ahead of the No.8 Audi despite trailing it almost the entire race.

It was the first win for the Japanese brand since the final round of the 2014 season, so it’s been a long time coming. Audi meanwhile, will spend the next two weeks reflecting on their future (see below), after what turned out to be a very odd weekend for the German LMP1 stalwarts.

Audi’s LMP1 programme may have an expiry date
Rumours seem to swirl every year, that Audi will be pulling the plug on its LMP1 programme; especially now that it’s been racing a sister brand in Porsche since 2014. This time it does seem that there may well be some substance to the speculation. Prior to the on-track running at Fuji Speedway, German media outlet Auto Motor und Sport reported that the Audi board will terminate the programme at the end of 2017 season, therefore running it until the end of the current WEC regulation cycle. Now, there’s no full confirmation that this is the case, but the piece was written by a well respected journalist in Marcus Schurig, who this writer can say whole heartedly wouldn’t publish a story of that magnitude unless he was more than 100% sure there was something there. Losing Audi would send shockwaves through sportscar racing, that’s for sure, and it would be a crying shame to see it leave. But these things happen, and it certainly wouldn’t come as a total surprise given that Audi Sport certainly don’t owe the sport anything after supporting it through thick and thin since 1999 and in a classy manner too. As the Audi crew congratulated the Toyota team though, with full of emotion after the race last weekend, John Hinhaugh on the WEC commentary feed did make a very interesting point: “That’s why they won’t be leaving, there’s too much passion, it means too much to them.” Watch this space.

Ford’s UK GTE team has life
After what was a very underwhelming season until the trip to Fuji, the UK arm of the Chip Ganassi Ford programme finally kicked into gear and took what seemed like an easy 1-2 in the Pro class. At each race to that point the pair of Fords had under performed, often having reliability issues or on-track blunders which cost them multiple podiums; lets not forget that the pair of GTs from the USA Ford team were the ones that had the dream run at Le Mans this season. With two rounds remaining, it appears that both Aston Martin Racing and AF Corse will finally have to deal with the Ford squad when it comes to racing for the win, after consistently finishing above them in each of the rounds prior to the race in Japan. And that’s great for the class.

LMP2 in its current form is spectacular
Yes next year’s cars will be considerably faster, and the quality of entries looks to take another jump; but what the LMP2 class has at the moment should be cherished. The variety in chassis was on full display last weekend at Fuji Speedway, with six of the cars in the class all having a legitimate shot of winning the race. It is safe to say that it turned into one of, if not the best LMP2 race in WEC history, with multiple nail-biting moments and clean racing throughout the field. After hours of duels between Alpine, RGR Sport, Manor, Strakka and ESM it came down to Will Stevens in the leading G-Drive Oreca and Bruno Senna in the RGR Ligier. And the battle between the two ex-F1 drivers didn’t disappoint. A gamble on tyre strategy from RGR promoted the Mexican team’s Ligier to the top spot after G-Drive led the whole race from the start. Stevens then had to fight his way back, taking the lead just a couple of laps before the flag. For G-Drive it was an incredible way to take its long-awaited first win of the 2016 season, and for RGR its title chances became even less likely, with Alpine holding a very healthy lead heading into the round at China.

The No.2 Porsche needs to return to form
After Le Mans it looked like the No.2 Porsche of Neel Jani, Romain Dumas and Marc Lieb would be a lock to win the title after winning at Silverstone and taking the full double points finish at the 24 hours at La Sarthe. But the trio have struggled since, finishing off the podium at each round and at Fuji looked totally lost, coming home a distant fifth. Now, they still lead by 23 points but all of a sudden the No.6 Toyota, which sits second in the standings looks like the stronger car. A couple more wins for Conway, Sarrazin and Kobayashi and the title fight could turn into a thriller that goes down to the wire. It wouldn’t be the first time…

The FIA WEC now moves on to China where the Six Hours of Shanghai takes place on the 6th November.