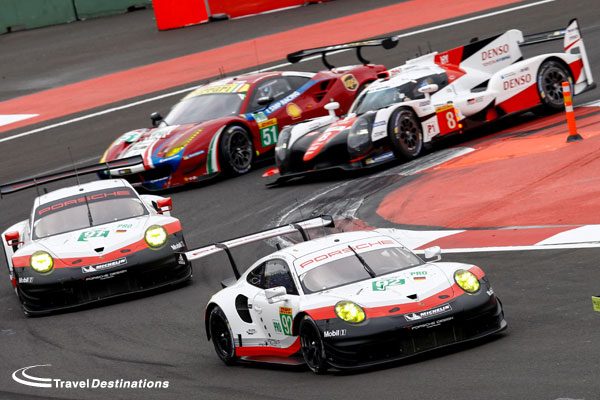 Our man in the stands traveled to Mexico for the next round of the FIA World Endurance Championship.  Among all the press conferences and announcements about the future of the series, there was also a race. Here is Stephen’s synopsis of what you may have missed.

Toyota’s struggles
Unfortunately for the fans in the stands, and at home watching on TV, the race in LMP1 at Mexico City was very much a non-event. For the first time all season, there were no real on-track battles between the two factory hybrid teams, Porsche taking off and crossing the line 1-2, a lap ahead of the two TS050 Hybrids. Prior to the trip to North America, Toyota took the fight to Porsche at the Nürburgring, before fading late in the race. The team was certain that its performance in Germany was to be expected, due to the medium-speed circuit not suiting the TS050, claiming that for the rest of the season, it would be challenging for wins. But it appears, after the 6 Hours of Mexico, that this may not be the case, with Porsche’s high-downforce aero package appearing to provide the team with a sizable performance gap to Toyota, that wasn’t there at Silverstone and Spa, when it ran its low-drag kit.

In what looks like it could turn into a repeat of the 2015 season – when Porsche debuted a new aero kit at the Nürburgring and were untouchable for the rest of the season – Toyota needs to act fast if it wants to take the title race to the wire. The No.2 crew of Timo Bernhard, Earl Bamber and Brendon Hartley are pulling away in the standings, and with just four rounds remaining, and look poised to win the world title in the wake of the team’s LMP1 exit.

GTE Pro continues to be the class of the field
Providing further evidence that the new Automated Balance of Performance system has improved the GTE Pro class’ parity, the race at Mexico was another thriller. It was Ferrari vs Aston Martin out front, with Ford and Porsche close behind fighting for the final podium spot, in a race which went down to the wire, with the No.95 Aston Martin of Nicki Thiim and Marco Sorensen taking the win after a time penalty was added to the No.71 Ferrari in the race classification after the flag fell. In the FIA GTE World Championship standings, all four marques are in with a shout still, with just 31 points separating them in the points tally heading into the round at CoTA. It’s been a real success, with Porsche the only brand yet to take a win. New teams are on the horizon for the next few years to join in the party, which is a welcome movement following the recent erosion of numbers at the head of the field. Long may it continue.

Manor shows potential
After what was a really tricky debut season in 2016, the guys at Manor WEC finally hit their stride in Mexico City, almost taking their first win. The team’s new trio of ex-F1 driver Jean Eric Vergne, DragnSpeed’s Ben Hanley and Signatech Alpine emigrant Matt Rao proved to be stellar, after Vergne and Hanley came alive in the second half of the race, climbing the order and eventually chasing down the leader until the final few minutes. While Hanley’s chances of passing Bruno Senna in the No.31 Vaillante Rebellion ORECA were admittedly slim due to the rain holding off, and the lead gap being too large, it was nevertheless a thrilling conclusion to another hard-fought LMP2 race in which most of the cars were in the mix. CEFC Manor TRS Racing’s performance though, was a standout, and with the No.24 trio returning for CoTA this month, they could be the team to beat. The hard-work from the former Formula One outfit, which still considers itself the new kid on the block in prototype racing, is starting to pay off.

The LMP2 title battle has hotted up
While Manor may not be a feature in the LMP2 title race as the second half of the season continues, the scrap at the front could turn into a really thrilling storyline. The leaders in the No.38 Jackie Chan DC Racing ORECA had a rough outing in Mexico, after clutch issues demoted them to the back of the pack in the race. While it was unfortunate to see the Chinese-flagged, British-run crew come away with little for their efforts, it has spiced up the championship. Ho Pin Tung, Oliver Jarvis and Thomas Laurent’s lead has been cut to just 23 points by Senna, Julien Canal and Nicolas Prost, who took the win at the Autodromo Hermanos Rodrguez circuit with a performance which left many questioning how they hadn’t won every race so far this season. With 104 points still on offer, it could be a memorable ride for those with skin in the game right the way to Bahrain.

Proton emerges
Despite fielding an older 2015 Porsche 911 RSR, Christian Reid’s Dempsey Proton Racing team have come alive this season, and have now taken the championship lead in GTE Am after winning in Mexico, taking advantage of a rare disastrous outing from Clearwater Racing. Reid, along with Italian Matteo Cairoli and Marvin Dienst were on the pace all weekend long in Mexico, as they were at the Nürburgring. It’s partly due to BoP swinging their way, but more so due to the rise of Cairoli and Dienst as starts. Both of them were nearly untouchable during the race, and up against talents like Pedro Lamy, Mathias Lauda, Miguel Molina and Ben Barker and teams which are all capable of engineering cars to victory. The class as a whole has been quietly the most exciting its ever been, despite having just five entrants. It’s a good sign for the future, in which GTE Am may – along with LMP2 – provide the backbone of the WEC.

The duo are going to be a force for years to come, and even if they do win the GTE Am driver’s championship this season, it feels like this is just the beginning for Porsche’s young professionals.

Look out for our report direct from the Circuit of the Americas next week!