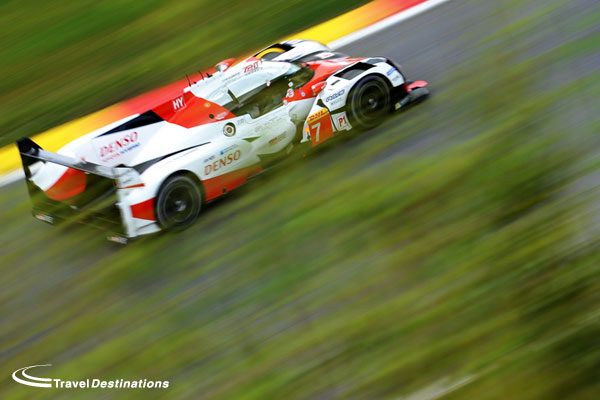 The 2017 FIA World Endurance Championship moved on to Belgium and the famous Spa-Francorchamps circuit this last weekend. As always this is the last FIA WEC race before Le Mans, so whilst there were battles on the track for championship points, there was also a lot of planning for the Le Mans 24 Hours. Ever present, our man in the stands was present trackside to follow all the action and bring you this exclusive report, looking at the main talking points and what we learned from the race.

1. Toyota’s Le Mans chances look good
Toyota Gazoo Racing has started the FIA WEC season with two wins from two races, and a Le Mans outlook which has arguably never been stronger. The 2017 TS050 Hybrid is a winning machine, with the regular drivers in the No.7 and No.8 cars both proving to be in the form of their lives heading into the big race next month. The question remaining though, concerns the aero-package. At Spa, the No.9 car of Nicolas Lapierre, Stephane Sarrazin and Yuji Kunimoto debuted the low-drag configuration of the car, which the team will race at Le Mans, while the No.7 and No.8 full-season FIA WEC entries ran the high-downforce kits that the team will use at the six-hour races all season. While the performance (a fifth-place finish) for the Le Mans option is likely down to the team using the race as an extended test session for both the car and drivers, it was interesting that it didn’t feature all weekend. The car did briefly take the lead when Lapierre out-braked himself into La Source at the start, but after that it failed to feature in the race for the podium, finishing far behind the two other Toyotas and both Porsches.

The difference is that Porsche has been running its own Le Mans kit all season so far, and has therefore had much more race experience with it, which is confidence building, as even though it hasn’t won yet, it came close at Spa with the No.2 919 Hybrid, which would have been involved in a grandstand finish had Brendon Hartley not lost time in the pits due to a nose change late in the race following a clumsy collision with the No.36 Signatech Alpine.

It remains to be seen how close the two marques will be on-track at Le Mans because of this, though it has all the makings of a classic should Toyota have some speed up its sleeve.

2. Aston Martin struggling for pace?
Aston Martin Racing has had a remarkably quiet 2017. While its two Vantages are still relatively fresh from combining to score the Teams’ Championship and Drivers’ Championship last year, so far this year they haven’t looked like even sniffing a podium. In GTE Pro it’s been all Ford and Ferrari so far, with Chip Ganassi Team UK and AF Corse in turn dominating Silverstone and Spa. Porsche has had flashes of pace, but the new car looks to be a few months from being perfect in the reliability and consistency department. Le Mans could well be a different story though. Le Mans will have a separate and thus far undetermined Balance of Performance applied, and this could favour Aston Martin’s Vantages as the cars have looked to be struggling.

In addition, the No.95 did produce one single lap in Free Practice 2 at Spa which put Dane, Marco Sorensen seconds quicker than his teammates, and atop the standings in the class. After that it was unable to produce a similar time, but it begs the question, is there something in reserve?

3. The Ferrari 488 has arrived
As mentioned above, the Ferrari 488 dominated at Spa, and in the second half of the race proved totally untouchable. It has been reliable – which it wasn’t last year – and now has the speed to match. AF Corse’s driver line-up too seems to be strong from top to bottom, with newcomer Alessandro Pier Guidi looking both quick and consistent over his stints in the car. The team finished the race 1 & 2, and looked unstoppable. If they can continue their form at the Le Mans 24 Hours, then they may well emerge as title favourites, should Ford not keep tabs, the Porsche get up to speed and Aston pick up the pace.

4. The new LMP2s look reliable
Before the season started there was much speculation as to how reliable the new LMP2 cars would prove. In testing the cars were suffering from electrical woes, and gearbox issues which often prevented teams from having extended runs. Silverstone and Spa though, have been very encouraging, the 2017 cars looking strong over long distances all of a sudden. Last weekend there was only one retirement in the field, which was Tockwith Motorsports’ Ligier JS P217, which suffered from a gearbox failure at the very end of the race. Tockwith is new to racing in LMP2 though, and the FIA WEC is a difficult challenge to master. Le Mans may be a different story, as going for twenty-four hours is much harder than six. But so far the signs are positive, and Le Mans’ potential to become a race of attrition is looking increasingly slim.

5. And race well together too!
As well as being reliable, the race at Spa put to rest the nay-sayers who assumed the racing in the FIA WEC’s LMP2 class would be poor, with the entire field being made up of Oreca 07s. The cars are aerodynamically sophisticated and performance wise much more powerful, which on paper in effectively a ‘spec series’, has the potential to produce processional racing. So far that hasn’t been the case, especially at Spa, with the 07s able to get a good tow and race close together. The drivers are enjoying racing with the new kit, and so are the fans. So when Le Mans rolls around, with a diverse 23-car grid, it could be the class to watch!

The next round of the FIA WEC will be the 24 Hours of Le Mans, taking place on the 17th -18th June 2017.
If you would like tickets to be at the big race of the season then please call the Travel Destinations team now on 0844 873 0203. Availability is limited, but we can still look after you.