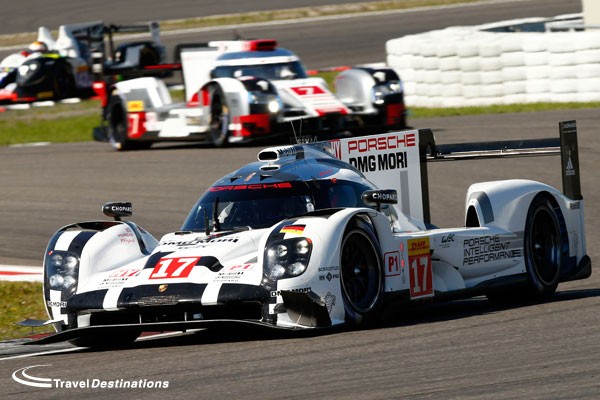 Porsche claimed a 1–2 victory ahead of fellow German rivals Audi in the 4th round of the FIA World Endurance Championship (WEC) held at the famous Nurburgring this weekend. A large crowd of more than 62,000 race fans across the weekend witnessed the No. 17 Porsche driven by Mark Webber, Timo Bernhard and Brendon Hartley take the win ahead of their sister car and the No. 7 Audi. The Nurburgring’s 3 mile F1 circuit is relatively short and twisty compared to Le Mans, where these cars last went head to head, so traffic management was as much a key as straight line speed for all the prototype teams. At the start of the race the pole position Porsche (no. 18) with Neel Jani at the wheel took advantage of clean air to quickly build a 20 second lead at the front. The No. 17 Porsche pitted early with nose cone damage, that dropped them down the order, but they were quick to regain ground with Audi unable to capitalise.

Problems began for the leader on the 54th lap. A problem with an engine sensor caused the car to consume more fuel than officially allowed, so they were penalised with a series of stop and go penalties until the problem was sorted. Clearly it was not an easy problem to fix as 3 increasingly long penalties were awarded by race control, dropping the No. 18 Porsche down the field.

If evidence were needed that Toyota were a long way of the pace, even after the penalties the No. 18 Porsche rejoined in 4th place, behind the Audis and still ahead of the Toyotas. The battle was then on in the remaining hours for second place, with the two Audis being reeled in by the charging Porsche. Eventually the Audi’s could not defend their positions and with 45 minutes left on the clock Porsche regained their 1-2 al be it with the No. 17 car in the lead. This was how it finished with Porsche celebrating from the top 2 steps of the podium in front of their home crowd. The LMP2 was dominated by the KCMG Oreca of Nick Tandy, Matt Howson and Richard Bradley. The started the race from pole and maintained that position throughout most of the race. A slow pit stop in the first half the race opened the door slightly for the 2 G-Drive Ligiers, but they couldn’t take advantage and eventually settled for second and third position in class. There were lots of smiling faces on the Porsche fans at the Nurburgring as the German manufacturer secured another 1-2 in the GTE Pro class. The No. 91 car driven by Michael Christensen and Richard Lietz, claimed the win ahead of their No. 92 sister car. The 2 Porsches benefited from electrical troubles suffered by the championship leading AF Corse Ferrari (No. 51), that ground to a halt within 15 minutes of the start of the race. Although the car was recovered to the pits and did rejoin they were always laps down from the leaders. The sister Ferrari (No.71) did keep the fight going and despite some bodywork damage and a puncture managed to hold on and climbed the third spot on the podium. The No. 72 SMP Racing Ferrari managed to build on their Le Mans win with another victory in the GTE Am class at the Nurburgring. They were pushed all the way by the No. 98 Aston Martin that eventually finished only 30 seconds behind in second place. These two cars traded the lead between them as they worked through their different race strategies but they were always ahead of the rest of the field. The No. 83 AF Corse Ferrari claimed third spot, narrowly edging out the No. 77 Dempsey Proton Porsche.

The FIA World Endurance Championship now moves away from Europe with the first stop being the Circuit of the Americas in Austin, Texas. That race will take place on the 19th September and we also expect the provisional 2016 calendar to be announced during the event.