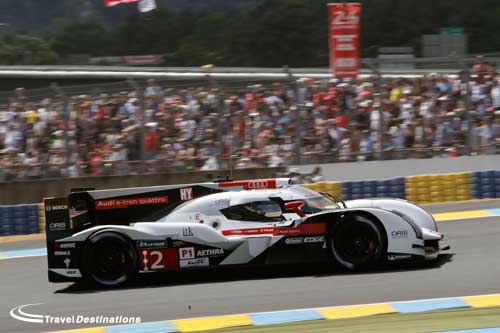 The 2014 24 Hours of Le Mans promised so much. It probably delivered so much more. Before Saturday’s race there was the a lot of hype surrounding Porsche’s return to LMP1 at Le Mans, Toyota had the best results in the FIA World Endurance Championship and then Audi were the 2013 winners. It was very difficult to predict the outcome.

Elsewhere, the LMP2 class was dominated by Nissan powered cars of various brands and shapes. The only thing predictable about LMP2 this year was that it was always going to be a close race. In the GTE Pro category there appeared a close fight between the Ferraris, Porsches, Aston Martins and Corvettes, whilst in GTE Am the dominance of the Ferrari branded cars surely meant a prancing horse would win. Wouldn’t it?

LMP1
The history books will record Le Mans 2014 as another Audi win. Indeed a 1st & 2nd would appear to show another Audi dominant performance. Until the very last hour this was never really the case. Initially the Toyotas looked the fastest and pulled out a decent lead. There is no doubt they had the fastest car here but as we all know that is never enough at Le Mans.

The rain that fell after 85 minutes did alter everything. An incident on the Mulsanne lead to a major crash. Both the No 8 Toyota and the No. 3 Audi were caught amongst a group of aquaplaning GTE Ferraris and Porsches in poor visibility and a soaked track. The result ended up with a very upset Marco Bonanomi as the remains of his Audi were recovered on to the back of a lorry, whilst the No 8 Toyota managed to get some drive to recover a badly damaged car to the pits. In reality their challenge for the title was also over. That the No. 8 Toyota would go on to claim third step on the podium says more about the drop outs in front of them than of their ultimate Le Mans performance.

It still looked like Toyota’s race to lose. The No. 7 car was quicker than the Audis and the Porsches and it managed to stay out of trouble until 15 hours in to the race. Inexplicably, in the darkness of the night, the car stopped on track. Losing all drive. Whilst everything was done to get it going again, it had already lost its sizeable lead and been passed by an Audi and a Porsche. They eventually conceded defeat and retired.

So this just left Audi and Porsche. 2 cars each. A straight head to head fight to the finish. Porsche did lead Le Mans & on more than one occasion. The Audis were troubled by faulty turbos on both cars and whilst they were being replaced Porsche had a chance. Ultimately they just weren’t quick enough. Although the No. 20 Porsche was leading with less than 3 hours to go, it was always getting caught by the flying No.2 Audi. The No. 14 car retired first leaving the Porsche “pin up” Mark Webber to lead the challenge in the No. 20. They never quite had the pace & despite making it in to the 22nd hour of the race, the car eventually succumbed to engine problems and had to retire.

This left the Audis. It all looked set for the No 1 car to bring home another trophy. It would have been Tom Kristensen’s record tenth win. With the No. 3 car crashed and the No. 2 car replacing their turbo it all looked written in the stars. But then their turbo failed as well with Tom in the car & although he limped back to the pits & the turbo was replaced, their challenge was over.

So the No. 2 Audi, driven by previous Le Mans winners Lotterer, Fassler and Treluyer became the champions of Le Mans 2014. They survived the rain, the challenge of Porsche and their own reliability issues in an eventful race. The speed with which Lotterer chased down the No. 20 Porsche in the final hours showed how much confidence they had in the car. Audi didn’t dominate. There were more leaders this year than in many of the previous years put together, but when the chequered flag fell they found themselves 3 laps ahead of the sister No. 1 car and a comfortable enough margin to enjoy the last 30 minutes or more of the race.

LMP2
The two Ligier branded Nissan powered cars seemed to dominate the race. The G-Drive labelled cars were strong throughout. Often battling each other with similar performance they made for a great race. The Murphy Prototypes car looked good but could not recover from two crashes. The Race Performance Oreca also challenged but experienced problems and faded near the end. The Signatech Alpin car was always in the top 4 but crucially could never make a run on the lead.

In the end this was the closest class to call and nothing was certain until the final lap. The No 35 Oak Racing Ligier was in the lead in to the last 2 hours. It was closely followed by the Thiriet by TDS Racing Ligier. The No 35 car had engine problems and started to lose it lead. At the same time the Zytek powered Jota Sport car began a very strong run. Finishing at speed it quickly caught the ailing No 35 car and then put in a concerted attack for the lead. Hitting the lead late worked, and even a “splash and dash” in the final laps couldn’t halt their momentum.

Oddly it was Oliver Turvey who brought the Jota Sport car home for the win. He didn’t even have a drive at Le Mans until Wednesday night, when he was called up to replace Mark Gene, who in turn had replaced the injured Duval in the No.1 Audi.

GTE Pro
The GTE Pro class provided us with some of the best racing action of the weekend. If you enjoy watching side by side fully committed racing by equally matched cars then this class was for you. Everyone expected the AF Corse Ferraris to be fast. They were hurt by the early accidents in the rain but the No 51 car continued strongly. Whilst the Manthey Porsches seemed oddly off the pace, the Aston Martin Vantages and the American muscle of the Corvettes were all equally matched.

It seemed that over the course of about 9 hours across the evening and night, there were three cars locked together. The No 51 Ferrari, the No. 97 Aston Martin and the No. 73 Corvette all challenged and held the lead at various times. Sometimes all 3 on the same lap, as passes were made again and again. There was occasional respite during pit stop rotations and yellow flags, but no car managed to break the others. Whenever one dropped off the other 2 continued the fight, and then the third would catch them again. Time and time again this happened. 2 cars abreast along the Mulsanne with a third waiting to pass was a very common sight.

Eventually something had to give; but not until the morning. The Aston Martin developed steering issues, probably from jumping too many kerbs & eventually spent too long in the garage. The Corvette couldn’t quite match the Ferrari for consistent pace, and eventually couldn’t keep fighting back. Indeed they ended up fighting the No. 92 Porsche that threatened to take 2nd place away. But in the end the strength of the Ferrari dominated and their win wasn’t in question during the last hour.

GTE Am
Eight entries with Ferraris always meant that this was going to be well matched field. It was a surprise then that they didn’t feature in the top two at the end. Dempsey Racings Porsche challenged for a while but technical issues meant they dropped back. The Ferraris of Krohn Racing, JMW Motorsport & 8 Star all deserve mention for finishing this gruelling race and doing so in fine form.

However it was the No. 95 Aston Martin Racing car that stole the honours, finishing ahead of the No. 88 Proton competition Porsche. It was a particularly poignant win for the Aston Martin team who lost driver Allan Simonsen in the No. 95 car at last year. They didn’t forget him this year, and this win will be dedicated in his memory.

So the Le Mans 24 Hours 2014 provided us with plenty of entertainment. Lots of incidents and accidents and thankfully few injuries. There was great skill and big mistakes. Sunshine and heavy rain. It was a race that promised much and delivered it all.