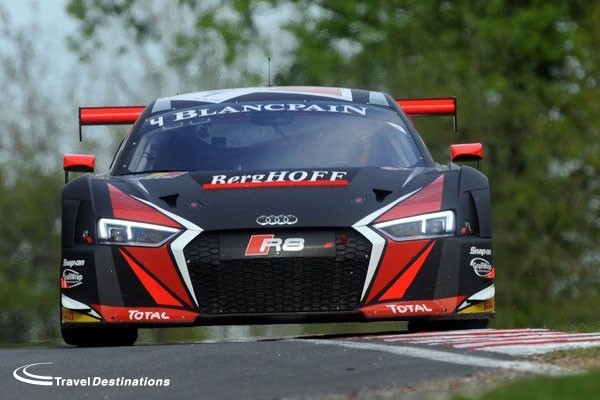 5 things to watch for at the Spa 24 Hours

The Spa 24 Hours is in many ways a marquee event in world Motorsport these days, with tons of factory interest, entries and a world-class venue to race on. This year, 65 cars are entered for Blancpain’s ‘blue riband’ event, with 29 in the full pro class at the front. Here’s five interesting storylines to follow from the runners and riders who will feature at the head of the field:

1. Garage 59’s three-car assault
McLaren GT customer squad Garage 59 has emerged as the team to beat so far this season in the Blancpain Endurance Cup, with two wins out of three races. The team’s leading No.58 650S GT3 of Rob Bell, Shane van Gisbergen and Come Ledogar has been both fast and consistent all season long and looks to continue its title challenge at Spa after victories at both Monza and the Paul Ricard 1000km.

In the second No.59 car is the trio of McLaren GT Driver Academy boys, Straun Moore, Alex Fontana and Andrew Watson, but the No.60 is the one to watch out of the other two. The No. 60 is a one-off entry which has 2016 Daytona 24 Hours and Sebring 12 Hours winner Pipo Derani, experienced Brit Duncan Tappy and ex-F1 driver Bruno Senna aboard. While they won’t be worried about picking up points as much as the #58 will, they’ll be just as motivated to win the race outright. The Spa 24 Hours hasn’t been a kind event to McLaren over the years, especially during its days with teams running the MP4 12C GT3, but that looks set to change. The 650S GT3 won the Bathurst 12 Hour earlier this year with Garage 59 and the winning car proved to be practically bullet proof in the process.

2. Audi’s attack
After the sheer disappointment of this year’s Nürburgring 24 Hours, Audi is out for redemption at Spa, with eight cars in the Overall (Pro) class; the most of any brand in the top category. Of the octet, three are backed directly by the factory, with two run by Team WRT and one by Phoenix Racing.

WRT’s lineup is stellar – as usual – with Nürburgring and Spa 24 winner Laurens Vanthoor, Nico Muller, Rene Rast and ex-F1 driver Will Stevens fresh from his first Le Mans to name a few. Pohenix meanwhile has Audi veteran Frank Stippler aboard, one of the safest pair of hands in the business. Last year the R8 LMS was in contention all the way to the end, but had to settle for second behind Marc VDS Racing’s BMW Z4 in its first run at the race.

3. DTM takeover?
This year’s race sees DTM drivers from Audi, Mercedes and BMW taking part. The biggest name is 2005 DTM champ Gary Paffet, who is making his GT debut at the race driving with fellow Mercedes DTM driver Max Gotz in the No.86 HTP Mercedes. Daniel Juncadella and is also on the bill in an AMG GT3.

From the BMW camp, GT stalwart Maxime Martin will be driving in ROWE Racing’s No.99 BMW M6 GT3, and Audi will field Italian driver Eduardo Mortara in Stippler’s usual ISR seat in the No.75 car.  Certainly some big names to follow in headlining cars.

4. Linkin Park link up
World-famous rap rock artists Linkin Park will be present at the Spa 24 Hours, not just as fans, but also with their name on a car. The No.00 Black Falcon Mercedes AMG will sport an eye-catching silver and red live ring with Linkin Park branding. The band itself are huge Mercedes AMG fans, and will present the car to the public on race week. It’s not going to be just a rolling billboard either, in fact it could well be the headlining Mercedes in the field come Sunday afternoon. Driving it will be the fierce combination of this year’s N24 hero Maro Engel, ageless former Spa winner and all-round Mercedes legend Bernd Schneider and ex-Marc VDS pilot Yelmer Buurman.

5. Two Jags
The plucky privateer Emil Frey team will most certainly be one to watch. For years it has developed its own Jaguar GT3 car from an unreliable garage-sitter that was often off the pace, to a solid and on the pace car which has become an evert-present Blancpain fan-favourite. Usually, the Swiss outfit brings just one to Blancpain Endurance Cup rounds, but for this year’s Spa 24 it’s going all out to prove the car’s worth on the biggest stage. The team comes with a very intriguing lineup of 2015 Spa winner Markus Palttala, Jonathan Hirschi and former Red Bull F1 drvier Christian Klien making his Spa 24 debut. The trio should be quick, and capable of making noise in Qualifying as well as during the race if things fall their way.