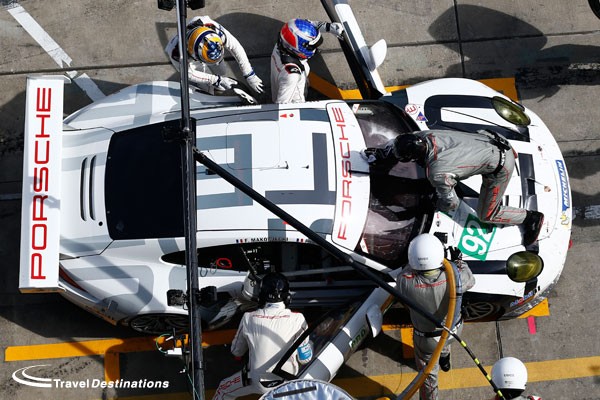 Graham Goodwin looks back at the last FIA WEC round at the Nurburgring and what we learnt from on the track and in the paddock.

The FIA WEC’s first race at the Nurburgring proved to be a great success. A highly believable 62,000 attendees over the three day weekend at a mainly sunny and slickly organised meeting ensured that when we hear about the 2016 calendar later this month at the Circuit of the Americas we’re likely to see the German track back on the schedule for a second year, though likely a little earlier in the year to reduce the gap after Le Mans.

On track there were dominant performances from Porsche in LMP1, a first ever 1,2 from the Porsche 919s in a 6 hour race with the No.17 of Timo Bernhard, Brendon Hartley and Mark Webber taking full advantage of mid race woes for the sister No.18 car which was penalised three times for excessive use of fuel, this after Neel Jani had romped off into the distance at the start.

A combined total of 95 seconds of penalties, Plus a further 90 seconds taken for the three runs down the pit lane to serve those penalties, saw the No.17 gain a lap lead and the No.18 fall back to fourth.

Thereafter though the Porsche fought back hard with some fantastic battling with the pair of defending Audis.

It proved though to be an unequal struggle and in the closing stages the 1/2 for Porsche was confirmed.

LMP 2 saw a dominant performance by KCMG, the Hong Kong based team running away at the front from the start courtesy of a very quick No.47 Oreca 05 Nissan with 2015 overall Le Mans winner Nick Tandy pulling away from the chasing Sam Bird.

The hard fought advantage though disappeared as the car was balked at Tandy’s final stop, the KCMG team needing to push the car back to the fuel rig for service.

Matt Howson though fought back to the lead and then Richard Bradley pulled out a huge advantage for Tandy to defend to the flag. The G Drive Ligiers completed the podium with the SARD Morand Morgan coming home 4th after spending part of the meeting impounded after the team failed to pay an early season catering bill.

In the race though the car went well with regular drivers Oliver Webb and Pierre Ragues joined by young Brit Archie Hamilton.

The GT classes saw trouble for the championship leading No.51 Ferrari, The car stopping in the first hour with electrical problems then suffering a further delay before the AF Corse found a solution.

The pro race ended with another Porsche 1/2, but only after a controversial incident that saw the second No.71 Ferrari suffer damage after substantial contact from the No.92 Porsche as the race went Full course yellow.

The Am class saw another Le Mans winner take the honours, the Russian flagged SMP Racing Ferrari consolidating its points lead in the championship.

The Nurburgring race saw a pair of overall Le Mans winners from this years race competing and, oddly neither of them were racing an LMP1 car as Nick Tandy raced to the win in LMP2, and Earl Bamber joined Abu Dhabi Proton in their Porsche, a move which brought a unique moment during the German race with Porsche factory drivers leading the race in every class.

The WEC moves into its flyaway staged now with the next race later this month at the Circuit of the Americas in Austin Texas.

That race meeting sees the World Championship on the same bill as the US-based Tudor United Sportscar Championship, both races taking place on a Saturday with the American race in the morning and the WEC racing into darkness.

There was more good news for the future of the WEC at the Nurburgring as more details emerged of further commitment to the championship from the existing LMP 1 teams.

All three currently active factory teams look set to bring entirely new cars to the track next season with Porsche confirming commitment through to 2018, Toyota confirming their new car, with a new twin turbo V6 and battery based ERS system and commitment to 2017 ” at a minimum” and Audi, though more diplomatic in stating length of commitment, also confirming a new car, Long rumoured to also adopt a battery ERS system, with paddock sources suggesting they too will be in the WEC until 2018 at the least.

In LMP2 were waiting to see any details of the new cars proposed from Dallara and Riley/ Multimatic. The American car allegedly already has multiple buyers and whilst some sources have suggested that the Italian concern has struggled to come up with a convincing commercial case for their entry into the LMP2 chassis market, Industry insiders have suggested that the effort is well on track.

Next up in the preparation for the new LMP2 scene in 2017 is the announcement, due imminently, of the supplier selected for the standard engine which will power all cars in the WEC, and most, it is planned, in the future ELMS

In the GT ranks the manufacturers are rushing to prepare their 2016 machinery for a mandatory test session at Michelin’s Ladoux test facility in France later this month.

That test will include not only the brand-new Ford GT but also the new Ferrari 488, and revised cars from Porsche, Aston Martin, and Corvette, together with, If plans come together, the USA only BMW M6 GTLM, this an upgraded version of BMW’s forthcoming M6 GT3.