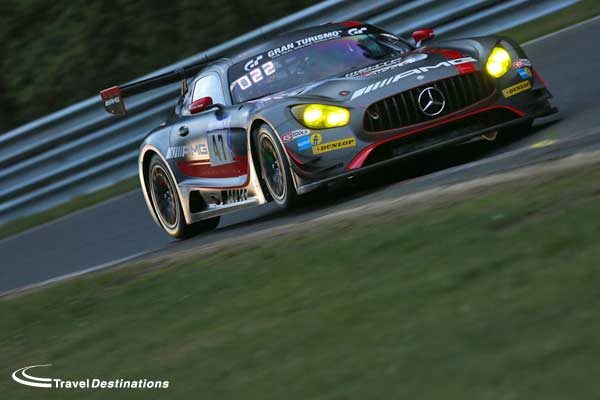 This time of year the major events in the motorsport calendar come thick and fast. Having just had a great time with hundreds of Travel Destinations customers at the Spa Classic this last weekend, we are swiftly moving on to the Nurburgring 24 Hours this weekend. Once again we are looking after lots of our customers at the circuit for this amazing event. Our man in the stands has taken a look at what our guests can expect to see this weekend.

It is that exciting time of year again, where over 150 cars take on the Nürburgring Nordschleife for 24 hours in an attempt to conquer the world’s toughest circuit through night and day, sun and, most likely at some point, rain! The classification of cars taking part can appear complicated and the garages are certainly crowded, but this all adds to the spectacle.

The SP9 class for GT3 cars; which will almost certainly produce the winner, features no less than 34 of Europe’s best GT teams this time around, spanning seven automotive brands. The marques with the most this year are BMW and Mercedes with ten and seven apiece respectively. BMW will be looking to extend its record of 19 N24 overall wins with the M6 GT3 returning for its second crack at the ‘Ring with Schnitzer, Falken, ROWE, Schubert and Walkenhorst. The driver lineups are stellar across the ROWE, Schnitzer and Schubert entries in particular, with a good mix of N24 veterans and rookies providing the backbone for its effort. It’s been a tough start to the year for the M6 racing on the Nordschliefe though, with its best finish 10th in VLN 2. That won’t necessarily translate to race-week at the Nurburgring though, with Balance of Performance always a factor all the way up until the flag drops on Saturday. The car, while still in its infancy, notably won the Spa 24 Hours last year too, after a disappointing run at last year’s Nurburgring 24. Look out for the Falken team, which is racing with BMW for the first time in its 17-year history at the Nurburgring 24 – and Schnitzer, which took the win back in 2010 for BMW (its last victory) and is back racing in GTs after a handful of seasons in DTM. Mercedes meanwhile, is looking for another dominant run to the finish at the Nurburgring 24 much like in 2016, when its AMG GT3s finished 1-2-3-4 in their first attempt at the race. Globally the AMG GT3 is one of, if not the strongest car in the GT3 ranks, with great speed and reliability, both which are of the utmost importance for the Nurburgring 24. HTP, Black Falcon and Haribo Racing are all back with Mercedes cars, and with another stellar set of drivers are looking to score the Stuttgart-based brand’s third overall victory.

Don’t count out Audi or Porsche though. The other two German marques head to the Nurburgring 24 with the best run of form. Nurburgring 24 stalwarts Manthey Racing bring arguably the strongest lineup to the race, with reining World Endurance Champion and Le Mans winner Romain Dumas and fellow Porsche factory drivers Fred Makowiecki, Patrick Pilet and Richard Lietz driving its No. 911 Porsche 911 GT3 R which won VLN 1 and 2. Local favourites Frikadelli Racing and Falken Motorsport make up the remaining teams racing with Porsche in SP9. At Audi, perennial Blancpain frontrunner and 2015 Nurburging 24 winner WRT will bring two R8 LMS GT3s, as will Land Motorsport, which won Germany’s premier GT series (ADAC GT Masters) in 2016 as well as multiple VLN races. Phoenix Racing, which won Audi’s first N24 back in 2012 returns with a single GT3 entry for the Four Rings too, though without factory backing this time. It did win the N24 Qualification Race earlier this month though, and has a formidable quartet of Dennis Busch, Nicolaj Moller Madsen, and Audi stalwarts Mike Rockenfeller and Frank Stippler.

The other three brands are lower in the car count, but will be just as interesting to follow.

Bentley are looking to score a landmark result as the Continental GT3’s lifecycle begins to reach its end. They will race with three Abt entries packed with factory drivers and regional specialists. This year Abt has opted to switch up its tyre partner and race with Yokohama, which could well prove an advantage in certain conditions. It must be noted that Bentley has had a positive start to the season, with second and fourth place finishes in VLN 1 and 2. Everyone back at programme HQ in Crewe will be hoping it can challenge with the frontrunners until the end.

Single Ferrari and Lamborghini entries bring the total to 34 in SP9, with Konrad racing a Huracan GT3 and Blancpain regular Rinaldi Racing operating a Wochenspiegel Team Monshau 488 GT3 for the car’s Nurburging 24 debut. Outside the main interest, there is, of course, plenty of other oddball entries to keep an eye on during the race as well. Two Glickenhaus SCG003Cs will race in SPX against a pair of brand new Audi R8 GT4s run by the aforementioned Phoenix Racing crew. Aston Martin will also compete. Whilst not in SP9 as in recent seasons, the Aston Martin Lagonda team will run two SP8 class Vantages – a  V8 with factory drivers Darren Turner and Nicki Thiim – and a V12. The Kissling Opel Manta, with its own cult following is, as ever, on the list, racing a pair of Opel Calibras in SP3 and a pair of Toyota Gazoo Racing Carollas; one of which will be driven by four Thai drivers!

Predicting a winner is always impossible when it comes to the Nurburgring 24, partly because there’s usually 30 cars capable of crossing the line first, and also because the circuit and local climate throws up so many variables. It is strength in numbers though, which is why the German factories come armed with a fleet of their latest kit each year! That’s what makes the Nurburgring 24 a special event. It is pure automotive bliss, supported by the most influential car brands in Europe.

The Nurburgring 24 Hours is a rolling motor show and a week-long festival for the locals, who refuse to let the event become stale, and continue to party in the Eiffel Forest like its 1979.