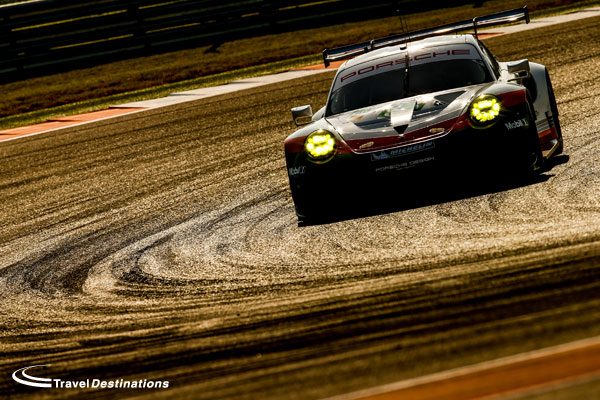 Following on from the FIA WEC Six hours of Mexico, the whole series moved across the border to Austin, Texas for the Six hours of the Circuit of the Americas. Of course our man in the stands went with them and brings you these talking points.

Porsche’s dominance continues
While the LMP1 battle at the head of the field was far more entertaining in Texas than it was in Mexico City, Porsche still had a clear advantage most of the way. Currently on a farewell tour, Porsche LMP1 Team is desperate to dominate and sweep the FIA WEC titles to add to the Le Mans crown once again in 2017. On track, the battles between Toyota and Porsche during the 6 Hours were thrilling, but the end result unfortunately never felt in doubt. In the second half of the race, Porsche pulled away from Toyota, scoring another 1-2 finish, with the No. 2 crew of Brendon Hartley, Timo Bernhardt and Earl Bamber taking their fourth straight overall win – the streak dating back to their Le Mans triumph. It was manufactured though, the No. 1 crew since Le Mans has had the pace in the race to win each race, prevented from taking the win by team orders each time. In some ways, it’s understandable, in others, it’s a shame. While Porsche would be deserving champions at the end of the year, the title race’s excitement level has suffered as a consequence. Toyota must get a better result at Fuji, and have luck go its way if it is to have any chance of taking the title fight to Bahrain. Because the points gap, seems pretty insurmountable.

Alpine is back
After dominating much of last season in LMP2, Signatech Alpine finally got back to winning ways in Texas; Gustavo Menezes, Nicolas Lapierre and Andre Negrao proving untouchable at CoTA. While poor luck at times earlier in the season struck, the catalyst for its big performance in the USA appears to have been Negrao. The Brazilian, who joined the No.36 crew in place of Matt Rao at Mexico, has proven to be one of the quicker Silver-graded drivers in the LMP2 field, putting them in good shape going forward. Don’t count out the French team in the final three races of the year, as it looks more than capable of racking up more wins after battles with Jackie Chan DC Racing and Vaillante Rebellion’s ORECA 07 Gibsons.

Porsche’s 2017 911 RSR still searching for its first win
Saturday’s 6 Hours of Circuit of The Americas was another near miss for the 2017 Porsche 911 RSR, which looks more and more capable of taking a win with each passing race. The race in Texas though, was its best to date, with the No.92 finishing second in GTE Pro, the highlight coming midway through the race when Kevin Estre fought his way past the two AF Corse Ferraris after the race’s only safety car, to take the lead. In the end, it was Ferrari’s day, but Estre and teammate Michael Christensen fought hard, almost taking the lead again late in the race when the winning No.51 Ferrari suffered a puncture and had to make an unscheduled stop in the dying minutes. It’s fast, and now reliable, it’s only a matter of time before Porsche finds the top step of the GTE Pro podium for the first time since 2015.

Farewell CoTA
Last weekend’s race at CoTA appears to be the last for the FIA WEC going forward. On the calendar since the 2013 season, the Austin-based circuit has represented the series’ marquee event in North America, and one which has always been popular with the teams and drivers. It failed to take off though, as it was never embraced by the locals and when held as a standalone event this year – without the IMSA WeatherTech Series – it felt more like a club meeting in terms of atmosphere than a real World Championship. The circuit, which itself is incredible, challenging for the drivers and great to watch for those trackside, was unfortunately never embraced by sportscar fans in the USA. The crowds suffered from the event’s poor timing – always run on a weekend in which the local College Football team was playing – severe September heat, and hefty ticket prices. It’s a shame, because those who did attend over the years are likely to miss the trip to Texas for the FIA WEC. Sebring is back on the calendar as its replacement though, for a 1500-mile race, for a double-header with IMSA, that should prove to be an extremely popular weekend of racing for fans and series stakeholders alike.

AMR back on track in Am
After a shaky start to the season, and another tough run at Le Mans, the No.98 Aston Martin Racing crew is back in the lead of the GTE Am championship after taking its second win at CoTA. Paul Dalla Lana, Mathias Lauda and Pedro Lamy have always been arguably the best top to bottom lineup in the class, but have often suffered poor luck when fighting for wins. The trio should have won at Silverstone had the final lap crash with Spirit of Race not occurred, and were poised for a good finish at La Sarthe before a puncture spoiled their chances. Now though, after a win at CoTA, they look like they’ll be the team to beat in the final three rounds of the season. The old Vantage is still a strong package, the drivers are too. The threats though, may be real – Clearwater Racing is competing on ‘home turf’ in Asia for the next two races, and Dempsey Proton (despite a rough time in the USA) is capable of winning races.