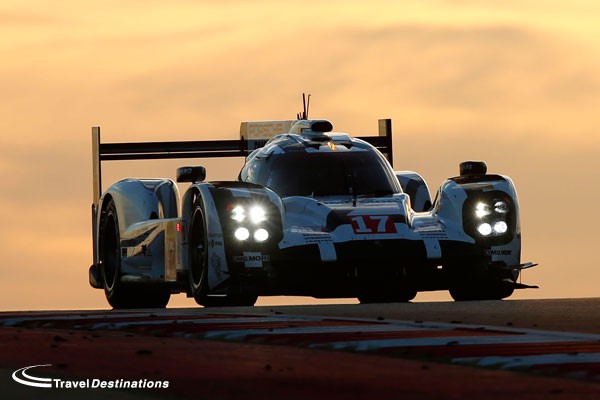 The 2015 FIA World Endurance Championship touched down in Austin, Texas for a 6 hours race that was dominated at the front by the Porsche teams. However, with Audi taking the other 2 steps on the podium there is clear evidence that there is no room for error this season. Sunshine and warm weather greeted all the teams on the grid for the Six Hours of the Circuit of the Americas, with the 2 Porsches heading the field. In the early stages the two frontrunners were battling each other with the No 17 car managing to pass its sister for the lead. The Audis and Toyotas were also fighting for the minor places but it appeared the Porsche was the car to have. As the race continued the spectacle became a little scrappy with mistakes and penalties ruining team strategies and some of the excitement. The No. 2 Toyota driven by Mike Conway was the first to exit the battle after losing control on the kerbs and hitting the barrier quite hard. Audi had an unusual pit stop issue when an airline got entangled with a tyre causing the mechanic to slip; a one minute stop go penalty for the incident delayed their progress. Porsche were not blameless either as the No. 17 car also incurring two stop go penalties, one for just overshooting the garage. All these incidents enabled the No. 18 Porsche to extend a big lead and all was looking good for them until electrical issues caused the car to return to the garage (only to return for the final lap). Audi perhaps sensed a chance to take the race and certainly pushed hard, but the No. 17 Porsche managed to avoid any more problems and penalties and ultimately lead the LMP1 cars home by just over 60 seconds. The two Audis gained good points in the overall Championship with their 2nd and 3rd place finishes. On reflection this was perhaps a missed opportunity for the Audi team.

In the privateer LMP1 class victory was taken by the ByKolles CLM car after both the Rebellion cars suffered electrical issues. In the LMP2 class the Ligier Nissans of the G-Drive team claimed 1st and 3rd place on the podium with relatively untroubled runs. KCMG claimed a very creditable 2nd place having started at the back of the grid following a penalty from qualifying. Behind them there was a scary incident for the No.31 ESM Ligier when brake failure occurred through turns 19 & 20, which led to hitting the kerb, becoming airbourne and impacting hard with the barriers. Fortunately Ed Brown, who was behind the wheel at the time, was OK; the car, however, was not. Porsche were also the dominant car in the GTE Pro class, with an unchallenged 1-2 on top of the podium. Aston Martin Racing had looked quick early on, but their fight was quickly dampened by the Porsches. The No. 51 Ferrari that has set the standard in this class over recent years, was besieged by technical problems and pit lane penalties and didn’t feature, whilst the sister Ferrari got ahead of the Aston Martins to claim the final step on the podium. Ferrari fared better in the GTE Am class. The early challenge of Corvette and Aston Martin faded in the Texas heat, leaving a battle between Porsches and Ferraris. Dempsey Racing’s Porsche looked strong and led after a great stint from Patrick Long. The No. 82 AF Corse Ferrari was eventually able to pass them, only to be overtaken themselves by the No.88 Abu Dhabi Proton Porsche that had made up ground from the very back of the grid. However, the eventual winner was the Championship leading SMP Racing Ferrari that waited until the last hour to hit the front and then didn’t look back. They now have a 35 point lead over the chasing pack in this year’s championship.

The FIA World Endurance Championship now changes continents again and moves on to Japan for the 6 hours of Fuji next month.