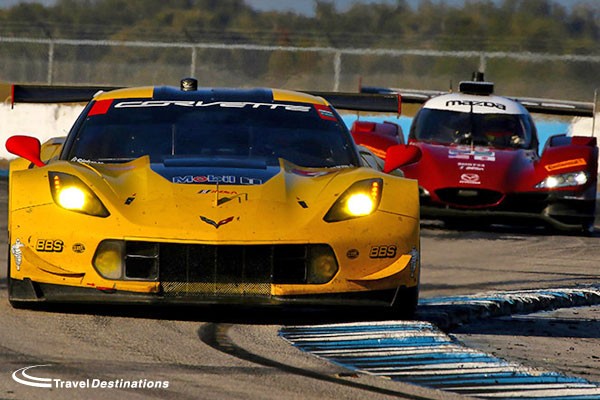 This weekend sees the 65th running of the 12 Hours of Sebring. This is one of our favourite races on the motorsport calendar and this year looks set for another exciting race. If you like small tight circuits, old fashioned concrete tracks, lots of action and of course the Florida sunshine then you just have to go to Sebring. Here our man in the stands takes a look at what we can expect from the race this weekend.

Cadillac held back?
After dominating proceedings at Daytona, the three Cadillacs racing at Sebring have been pegged back by the IMSA Balance of Performance process. The three DPi V.Rs have had weight added and had the air flow to the engines reduced in an attempt to allow the other prototypes to compete over a single lap. Whether it will work at Sebring or not remains to be seen, as the Cadillacs proved to be the most reliable, as well as the quickest in almost all conditions at the Rolex 24 at Daytona. The prototype field which Action Express and Wayne Taylor Racing is up against, as a whole, is still impressive following Daytona. Entries from Mazda, Cadillac, Ligier, Oreca, Riley and Nissan grace the class, making for the most diverse prototype grid on the planet. Only DragonSpeed has fallen off the list since January. With the gloves off at Sebring, it’ll be very interesting to see who actually emerges on top! Alex Lynn out to impress
While the Cadillacs entered are the same as at Daytona, the driver lineups have seen some tweaking. The most notable change heading into the race is Wayne Taylor Racing’s addition of British driver Alex Lynn. Lynn takes the place of newly-retired Max Angelelli in the team’s third seat for the endurance rounds of the WeatherTech Championship this year, and is set to impress on the North American endurance stage. Since moving over from single-seater racing last year, Lynn has raced with Manor in the World Endurance Championship as well as United Autosports in a one-off LMP3 race. He’s fast, consistent and used to high-pressure situations. If you watch a lot of sportscar racing, then you’ll be seeing a lot more of Alex too. With appearances in the VLN championship and Nürburgring 24 Hours with BMW, Petit Le Mans with Cadillac and the full World Endurnace Championship with G-Drive Racing. He is going to be busy.

Sebring Title Defence Beckons For ESM
After winning both the Rolex 24 Hours and Sebring 12 Hours last year, Extreme Speed Motorsports is back for another crack this year to try and repeat at least one of its high-profile victories from a year ago. At the Rolex 24, the Ligier-based Nissan DPi impressed over the full race, with only minor issues setting it back and preventing it from truly challenging for a podium spot in the final hours.
In its return to Sebring since its big win, it continues to field a stellar lineup, with Scott Sharp, Ryan Dalziel and Pipo Derani in the No.2 car and Ed Brown, Johannes van Overbeek, Bruno Senna and Brendon Hartley in the other. We still don’t know for sure who the favourites for the overall title are this year, but we’ll have more of an idea after this weekend. If ESM take on the punishing airfield-based circuit this weekend and come away with a good result, then it’s game on for the remainder of the season. Ford Brings Three
Ford Performance is set to field a trio of GTs in the GTLM class this year, after taking a quartet of them to the Rolex 24 Hours. Out to win the big races, Ford knows that it has the chance to win the Le Mans 24 Hours, Rolex 24 Hours and Sebring 12 Hours in less than nine months if it can seal the deal this weekend. Driving the third car is the World Endurance Championship crew of Billy Johnson, Stefan Mucke and Olivier Pla in the No.68, which should provide a formidable third bullet in the Ford gun. It would be mightily impressive but not necessarily surprising to see them win its second Floridian race this year; as even a year later the GT still looks just as much like a prototype (if you squint your eyes) as it did at its debut. The GTLM field will be close though, with Porsche, Corvette and the Risi Ferrari all looking capable of taking the win at Daytona. There is not much between them as they head to Sebring. GTD looks wide open
After Alegra Motorsports took a surprise victory at Daytona, with its Porsche 911 GT3 R that had a quiet run to the front, anything can happen going forward. Alegra will race at Sebring – after its impressive run prompted it to extend its commitments for 2017 – but it’s so close that we will likely see a second winner in as many races. Will the Acura NSX GT3 show its true potential? Can the Mercedes AMG GT3 runners mimic their European counterparts? Is counting out the Audi teams going to be a mistake? At this point we just don’t know, which should make the GT3-based class a fascinating watch. It certainly looks like Travel Destinations guests trackside at Sebring this year are going to be royally entertained on the track. With the addition of the Club 12 bar and grill in the centre of the track alongside live music and entertainment throughout the weekend, there is plenty going on around the circuit too. It is going to be fun!

If you would like to be at the 12 Hours of Sebring next year, then you can register with us now to be the first in line to choose your travel, accommodation and tickets. Register your interest by calling Travel Destinations on 0844 873 0203 or email info@traveldestinations.co.uk