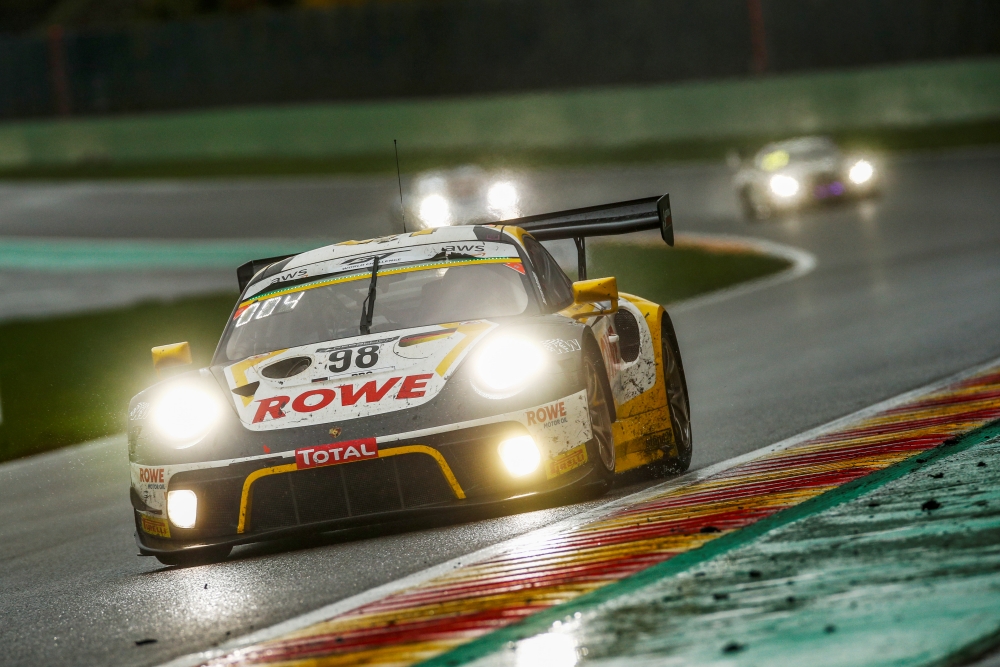 Last weekend’s Spa 24 Hours is in the books, with Rowe Racing delivering a second straight win at the event for Porsche in an Autumnal edition of GT racing’s biggest endurance race.

What can we take away from the week in Spa? Travel Destinations’ Stephen Kilbey unpicks the best bits…

This certainly wasn’t the first time the Spa 24 Hours has been run in wet and windy conditions, and it won’t be the last…

It was a real race of attrition on this occasion, with contenders hitting trouble all the way to the flag. We’ll get onto some of that later, for now it’s time to reflect on the winning Porsche’s run.

Nick Tandy was simply superb in the closing stages, powering Rowe Racing’s No. 98 Porsche 911 GT3 R to the win, snatching the victory from the pair of Audis from Attempto and Sainteloc that appeared to be in control as the race began to wind down.

With the rain increasing and 90 minutes to go, Tandy began to make his move, cruising past Alessandro Pier Guidi’s No. 51 AF Corse Ferrari for third before taking chunks of time from the Audis ahead.

A Full-Course Caution moments later would prove aptly timed, as it bunched up the field when the safety car made an appearence. The Audis dived in to change tyres while the crew behind the scenes at Rowe gambled and double-stinted the No. 98’s Pirellis, allowing Tandy take the lead.

With the final hour in progress the chase was on, and Tandy, who lest we forget has wins with Porsche at Le Mans, Sebring, the Rolex 24 and Petit Le Mans under his belt, would be pushed to the limit. With the conditions treacherous, his tyre performance dropping off and the added stress caused by his gearbox failing due to a ‘lack of transmission oil’, it would take something special to claim the victory. With eight cars still on the lead lap by that point, one mistake could have been the difference between a famous win and a disappointing finish outside the top five.

Luckily for Tandy, the Attempto Audi of Patrick Niederhauser, which was reeling him in, was unable to make a move for the lead in the final moments. In a wild twist of fate, the gearbox issue that caused Tandy’s lead to shrink to just a couple of seconds by the final few laps prevented the Audi from getting past, as the 911 was laying down oil, making it near-impossible for Niederhauser to find the traction required to get through. It meant that the Audi would follow the coasting-Tandy home, just over two seconds off.

This was a dramatic crescendo to the race, which made the victory even more sweet for Tandy and his teammates Earl Bamber and (hometown hero) Laurens Vanthoor, who had battled hard throughout. As is often the case with the Spa 24 Hours, it was a 20-hour battle for survival that consisted of jabs rather than knockout-blows being traded between the frontrunners, with a four-hour no holds barred sprint at the end.

“I’ll never forget this finale,” said Tandy after the race. “Our victory was hanging by a thread when loud noises suddenly started coming from the rear of the vehicle in the penultimate lap. It almost sounded as if small bombs were exploding. I got a fright and at the same time, the rear axle was sliding around on a trail of oil.

“What I didn’t realise was that the oil was coming from our car. Unfortunately for our competitors, we coated the track with oil. We can only apologise for that, but it kind of saved us! I had to drive the last lap and a half without pushing, and I had to coast through the corners in order not to cause more damage. I still can’t quite believe that the Porsche 911 GT3 R got us over the finish line. The relief and joy are indescribable.”

It must be noted too that Rowe Racing’s win was particularly notable because it comes just a month after it scored a huge win at the Nurburgring 24 Hours, but with BMW, not Porsche!

In an age of bullet-proof reliability in sportscar racing, it’s become a rarity to see a huge list of DNFs on a 24 hour race result sheet, especially in GT3-only races such as Spa where the entire field are competing with proven machinery, all running to similar lap times.

But Spa is a punishing circuit, especially when the weather takes a turn for the worst like it did over the weekend. There were plenty of thrills and spills up and down the order, with 18 of the 56 cars that took the start retiring.

This list included some of the contenders for the outright win, with FFF Racing’s No. 63 Lamborghini perhaps the most significant of the bunch, after Dennis Lind crashed at Raidillon during the morning.

However, the most dramatic incident of the weekend didn’t come during the race, or even during a session for the Spa 24 runners. Instead, a huge incident for Raul Guzman on Saturday morning in the Lamborghini Super Trofeo delayed the start of the 24 and produced the biggest talking point of the meeting.

The incident saw him sent flying over the fencing and Armco on drivers’ left on the run down to Eau Rouge, after running three-wide with Jonathan Cecetto and Kevin Gilardoni (as seen in the video above). Thankfully the Mexican was ok and escaped with minor injuries. It’s a testament to the safety of modern GT machinery….

SRO held is annual ‘state of the union’ press conference ahead of the Spa 24 Hours, with Stephane Ratel outlining the plans his huge swathe of GT championships.

Most of the calendars were revealed as part of the conference, the headline being the Intercontinental GT Challenge schedule for ’21 being reduced to four races, with the Spa 24 Hours next year now the opening round following the cancellation of the Bathurst 12 Hour.

The emphasis this year was on a renewed focus to attract and cater for amateur drivers and private teams to all of SRO’s championships from World Challenge, all the way down to its regional series.

This includes the introduction of a new GT Rebellion championship for Bronze drivers, a GT3 Anniversary festival at Monza which will include the chance for some of the older GT3 cars in circulation to race at Monza. The GT2 platform will also be rebooted with a new European Series with the same calendar as the GT Rebellion series which will include a races at Spa on race week for the Spa 24 Hours.

At times like this, organisers cannot, and should not, rely too much on factory money. SRO’s philosophy is smart. It builds grids in GT racing from the bottom up; Pro teams with factory money are an added bonus which headline events, but the foundations long-term have been laid with privateer outfits. That is why SRO has been able to attract huge fields of cars in its various championships around the world and it is why we should remain confident it can navigate these challenging times successfully.

The Future of Spa

As for Spa itself, the future looks bright too.

A 10-year redevelopment project was announced earlier this month, which includes a huge cash injection which will see brand new grandstands constructed around the pits and Eau-Rouge/Raidillon as part of the drive to bring international bike racing back to the circuit.

These new stands will double the number of seats for spectators at the circuit and increase hospitality areas. For fans this is welcome news, as the circuit facilities have needed updating for a while now. The new Raidillon stand with 4,500 seats sounds particularly impressive, with views from La Source all the way through to the start of the Kemmel Straight.

Once completed it should make spectating at the world-famous Ardennes circuit even more incredible….

Images courtesy of Spa-Francorchamps and Porsche