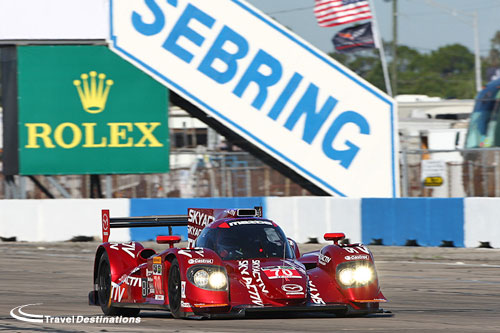 After what was an eventful race, Marino Franchitti brought the No 1, Ford Riley powered Daytona Prototype of Chip Ganassi Racing across the finish line to win the 62nd 12 Hours of Sebring. The race was perhaps most memorable for the amount of time spent lapping under yellow flags, but the Chip Ganassi team will not worry about that.
This year the Sebring race was the 2nd round of the new Tudor United Sportscar Championship (TUSCC) and so was the first to see Daytona Prototypes go head to head with Le Mans prototypes on this famous old circuit. The balance of performance between the two types appeared competitive as second place went to the LMP2 car of Extreme Speed Motorsports, just 4.6 seconds behind the winner. With so many yellow flags during the race, it was predictable that one would ultimately influence the result. With less than an hour to go, a stricken Corvette Daytona prototype brought out the safety car for the 11th (& final) time. All the leaders pitted for fuel except for the No 1 car that had just returned to the track from a full service. They inherited the lead and despite the best efforts the chasing pack over the final 20 minutes of racing, Chip Ganassi Racing held on for the win.
This victory on the team’s debut at Sebring also marked the first win by a Ford Ecoboost engine. It also adds to Chip Ganassi’s impressive record in the USA with trophies already in the cabinet from the Rolex 24 at Daytona, Indianapolis 500 and Daytona 500 in previous years. Action Express’ Corvette Daytona Prototype finished third at Sebring. Another impressive result for them, following their victory in the first TUSCC round at Daytona. Oak Racing’s Morgan Nissan LMP2 car finished 4th with the second Extreme Speed Motorsport Honda powered LMP2 in 5th, meaning that 3 out of the top five were LMP2 cars. Sebring saw a significantly better performance against the Daytona prototype vehicles. The entry level prototype class (LMPC) was won by Core Autosport. This was their second consecutive win following victory at the Rolex 24 at Daytona. They were pushed hard in the final stages by RSR Racing who finished less than 3 seconds behind at the finish. Starworks’ No. 8 car also made it on to the podium. However, the LMPC class was most notable for a number of high speed accidents, spins & other incidents that contributed to the high number of yellow flags in this race. The fact that some, if not most, were obviously avoidable incidents may well lead to a review in the in the not too distant future. In many ways this race was a testament to the Oreca FLM09 chassis, as no major injuries were sustained from the high speed collisions.

Controversy at Sebring in the GT classes

There was more controversy in the GT classes at Sebring as Porsche came home to win both the GTLM and GTD classes. In GTLM the No 912 Porsche 911 RSR claimed victory finishing 5 seconds ahead of the No. 93 SRT Viper & the No. 55 BMW Z4 GTE from Team RLL. The win for Porsche owed a lot to fortune as they emerged ahead of the field at the last caution period, whilst the rest of the field had to pit for fuel. More remarkably was the Porsche’s escape from an incident about 8 hours in to the race. The No 912 Porsche clearly made contact with the No. 49 Ferrari as they negotiated Turn 7. This contact we seen as avoidable by the stewards as they reviews on-board camera footage. Their decision was for a stop & hold penalty, but bizarrely attributed the discretion to the wrong Porsche! This stewards decision also impacted on the GTD class, where the No. 22 Alex Job Racing Porsche suffered the stewards penalty despite being innocent of all wrong doing. This dropped them down to 4th in the class at the end, but who knows what they could have achieved if they had been allowed to stay out on track. Ultimately the win in GTD was taken by No. 44 Porsche 911 GT America of Mangus Racing with Andy Lally at the wheel as they crossed the line less than 2 seconds ahead of the AIM Autosport Ferrari 458 Italia GT3.
The Alex Job Racing No. 23 Porsche finished on the last step of the podium ahead of its sister car, with the first of the Audi R8 LMS cars, making the debut at Sebring home in 5th under the stewardship of ALMS favourites Flying Lizard Motorsports.