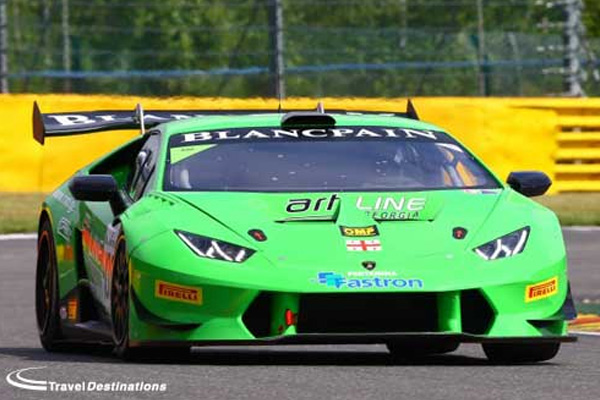 The Spa 24 hours is one of the biggest GT races in the world; If proof were needed, and it isn’t, of the popularity of the GT3 formula, then the 66 car entry would certainly be admissible in court! Better still, If there has been a change since 2014, it’s been an improvement in the quality and depth of the professional teams that will feature in this year’s events. Before an analysis of the entry though, it’s worth revisiting one major talking point from last years race; safety.
Put gently, the 2014 spa 24 hours was one of the scariest races that this writer has ever witnessed. A string of major accidents saw huge damage, more than one driver hospitalised, And on reflection very good fortune that we aren’t looking back on worse news still.
A solid response was required from the race organisers and that’s what we got!
Adoption of the Sean Edwards foundation programme was a sensible and highly appropriate move, recognising the challenges inherent in a packed grid of cars with broadly similar performance but with drivers of vastly different skill and experience levels.
Moving onto the entry proper, these might all be GT3 cars but there’s no shortage of variety. 11 different marques, and 14 different cars are represented amongst the 66 cars & three class grid. No fewer than 28 of those cars populate a packed Pro Cup. Audi have already taken a major 24 hours racing honour with the new for 2015 Audi R8 LMS after a dominant run at the Nurburgring 24 hours in May. Their plans though in preparation for Spa suffered a blow with an uncharacteristically off-colour run at Paul Ricard. Despite that though there is little doubt that the quartet of new Audis feature highly on many peoples list of race favourites. The crack WRT and Phoenix efforts are studded with Audi factory talent with the #1 WRT car in particular, featuring the talents of Messrs panther, Rast and Winkelhock, a difficult lineup to ignore. Phoenix meanwhile field a trio of Le Mans 24 Hours winning drivers in their No.6 Audi, Lotterer, Fassler and Rockefeller another very classy looking squad.
The Audi though it is not the only new car this year with Lamborghini campaigning their brand-new Huracan GT3, a car which features an identical powertrain to the Audi but with a very different aerodynamic solution. The new Lamborghini is as yet unproven over 24 hours but it’s been fast all year so far and there’s little to suggest it will be anything other than a major contender. McLaren too have a new toy for 2015 with the spectacular new 650 S GT3, three of which will contest the pro class. Look out in particular for the pair of von Ryan Racing entered cars which feature a galaxy of McLaren factory talent – the No. 58 car in particular, fielding Bell, Estre and van Gisbergen has all the signs of being a real contender.
Bentley were the new boys last year but suffered early problems that cost them dearly. They’re back in 2015 though with no fewer than four cars in the Pro Cup, a pair piece for M-Sport and HTP with the lead M-Sport car looking likely to be in the overall mix if all goes to plan. Nissan’s GT-R has had a comprehensive upgrade for this year and it shows! There are two Godzillas in the pro class, one apiece for GT Academy Team RJN and MRS GT. The No. 23 RJN car won last time out in a very convincing display at Paul Ricard, there’s little to suggest that Nissans won’t again be on the pace in Belgium.
BMW is represented by four of the sonorous Z4 GT3s from three separate teams. The No. 9 ROAL Motorsport car sees Paralympic hero ex-Formula One and Champcar star Alex Zanardi Contest his first 24 hour race, BMW having made major changes to the Z4 to accommodate his needs alongside there is a teammates Bruno Spengler and Timo Glock. The all Brazilian crewed No.77 car should be quick but is likely to play second or third fiddle to the pair of Team VDS cars. Maxim Martin and Augusto Farfus in the No.45 add another to all list of most likely to succeed. Mercedes-Benz are represented in the pro class by Black Falcon and Rowe Racing, both with a pair of well crewed SLS AMG GT3s
Finally Ferrari, who has 16 cars on the overall entry but only one in the Pro Cup. The all green No.333 Rinaldi Racing car though has proved able to mix it with the leaders throughout the season so far.
The Pro-Am class features 24 cars with almost as many stars on the roster as the Pro Cup!
Ones to watch here include the third Nissan, the No.22 GT Academy Team RJN car with a trio of GT Academy winners joined by Nissan LMP1driver Olivier Pla. Mathias Beche is another LMP1 man, he joins the TDS Racing BMW squad. Look out too for the No. 32 Leonard Motorsport AMR Aston Martin which features factory driver Stefan Mucke, and rising GT star Tom Onslow Cole on the roster.
There are a trio of British entered BMW’s from team Russia by Barwell, Ecurie Ecosse and Triple 8 Racing, all of which could be in the mix too. Amongst the Ferraris look out for a current world champions Gimmi Bruni (No. 47) and Toni Vilander (No. 52).
Look out to the sole Jaguar in the race, the Swiss Emil Frey Racing outfit have found pace this year with the pretty blue XKR. A charity effort fielding a BMW is worth the watch too with Spa legends Eric van de Poele, Marc Duez, Pascal Witmeur and Jean-Michel Martin named on the entry.
Finally the Am Cup features 14 cars, half of which are Ferraris, and, the only two Porsches in the race! These cars aren’t likely to feature in the higher echelons of the finishing order but experience tells us that some of them might well feature in the action that determines who will lift the trophy!
Here’s to a fast, thrilling and safe Spa 24 Hours.
Written by Graham Goodwin
Photography by Dailysportscar