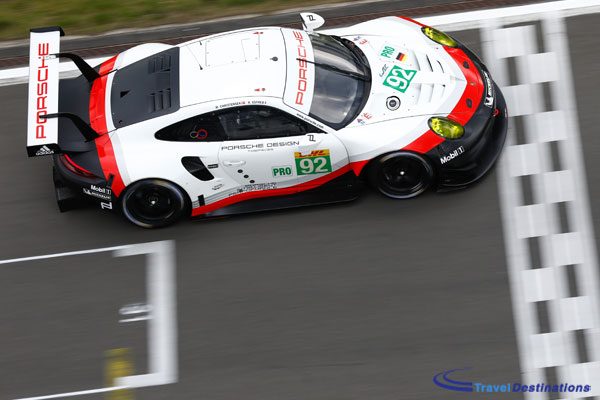 Our customers at the Nurburgring enjoyed another exciting round of this year’s FIA World Endurance Championship at the weekend. Although the result was ultimately a good win for Porsche there was a lot of other stories happening elsewhere on the track too. Our man in the stands takes a look at what we learnt from the FIA WEC 6 Hours of the Nurburgring 2017.

Toyota are still in the fight
Despite having had a disastrous run at Le Mans and now a result to forget at the Nurburgring (with Porsche finishing 1-2), Toyota Gazoo Racing are still very much in the fight for more wins and the 2017 title. The team has always struggled mightily at the Nurburgring and this time were more than competitive. The No.7 TS050 Hybrid took pole position, and led the opening hour of the race, until damage to the car’s underfloor, and rear wing (discovered after the race) caused a drop in the car’s ultimate pace. In 2016, both Toyota cars were lapped by the winners. This time around their No.7 car in third finished just a minute behind. Porsche’s new high-downforce kit inevitably  still has pace to be unlocked, but the early signs are that the rest of the season is set to be close between the two main LMP1 manufacturers.

Toyota needs to ensure that the No.8 has a good run for the remaining five rounds in the season, as finishing five laps down at the Nurburgring after a fuel pump issue has damaged the title hopes of Kazuki Nakajima, Anthony Davidson and Sebastien Buemi who now find themselves 30 points back from the No. 2 Porsche boys. (The No.7 car is all but out of the race after DNFs at Silverstone and Le Mans).

Team orders are already at play
Porsche is clearly trying to sew up the title as early as possible and negate any recovery from Toyota. Porsche utilized team orders at the final pit stops at the Nurburgring to ensure that the No.2 Porsche of Brendon Hartley, Timo Bernhard and Earl Bamber took the win on Sunday. Yes, we’re only at the halfway mark of the season, but it is clear that Porsche knows that it’s No. 1 car (with a DNF at Le Mans) has almost no chance of taking the championship this year. If Toyota is to win the Driver’s title, then it needs to ensure that the No.8 also finishes ahead of their No.7 wherever possible during the remaining non-European rounds.

GTE Pro title race tightens
In the GTE Pro category, the title races have heated up nicely with the second half of the season still to run. Both the Driver’s, Team’s and Manufacturer’s title races are still close, with all four factories in the mix, which is a testament to the strength of the Balance of Performance this season. There’s just 20 points separating the top five teams in the LMGTE Pro teams title race. The No.67 Ford UK GT still leads the way, but with 84 points, is just 11 ahead of the No.51 AF Corse Ferrari which finished first at the Nürburgring and the No.91 Porsche which is now level after a second in Germany, but classed as third due to the No.51 having a win on its record this season. The No.97 Aston Martin is fourth, four points back with 69, ahead of the No.71 AF Corse Ferrari that finished last at the Nürburgring after gear shifter problems that’s now on 64.

It’s slightly more complex in the Drivers’ title race, which has been affected by the inclusion of GTE Am drivers (eligible for the championship) scoring highly at Le Mans. Andy Priaulx and Harry Tincknell are on 84 points at the top, with Pipo Derani alone in second (though he will slip down the order now that his Ford deal is over). The nearest challengers to the No.67 Ford GT duo is the No.91 Porsche GT Team pair of Fred Makowiecki and Richard Lietz that are a point off Derani and 11 points of the leaders. The No.97 Aston Martin is now 15 points back in fourth (but truly third) after finishing off the podium at the Nurburgring.

The closest battle in the GTE ranks though, is in the Manufacturers Championship. AF Corse’s win in the Eifel Forest has seen them move level with Ford on 135 points in the lead. Aston Martin have 113 in third, with Porsche on 106 in fourth.

Jackie Chan DC Racing running away with it in LMP2
Meanwhile in LMP2, Jackie Chan DC Racing is running away with it, after its ‘Mighty 38’ trio of Oliver Jarvis, Thomas Laurent and Ho Pin Tung produced their third win in four races this season. It was a dominant run too, after building a lead in the first half they became untouchable for the final three hours of the 6 hours of the Nürburgring, the winning margin was eventually over a lap. The only real contender in the title race now, is the No.31 Rebellion, which needs to start winning races if it is to have any shot of even taking the title race down to the wire. But being 46 points behind though, is a pretty tall order. Jackie Chan DC Racing have looked almost unbeatable at times when everything runs smoothly. The only way this gap closes is if they drop significant points on multiple occasions and the No.31 trio are able to capitalize.

Dempsey Proton emerges in GTE Am
The title fights in GTE Am, like GTE Pro, are also tight knit, and have the potential to be decided at the Bahrain season finale. Dempsey Proton Racing had a fantastic run on home turf last weekend, with young rookies Matteo Cairoli and Marvin Dienst steering the team, and teammate/team owner Christian Reid to their first win of the season. That, coupled with the championship-leading Clearwater Racing Ferrari finishing fourth, has closed the gaps considerably. Meanwhile, in the championship for GT Am Drivers, it is all change. Christian Ried, Marvin Dienst and Matteo Cairoli have moved into the lead, with 88 points after their win, although they are level with Clearwater’s trio, which dropped points at Le Mans by finishing behind guest entered GTE AM drivers. Pedro Lamy, Paul Dalla Lana and Mathias Lauda are third, but just two points back. With three clear protagonists, the rest of the season will be fascinating.

The FIA World Endurance Championship now moves away from Europe for the rest of the season, starting at Mexico at the beginning of September. Travel Destinations will be returning to all European rounds again in 2018 and you can register for more information by emailing us at info@traveldestinations.co.uk