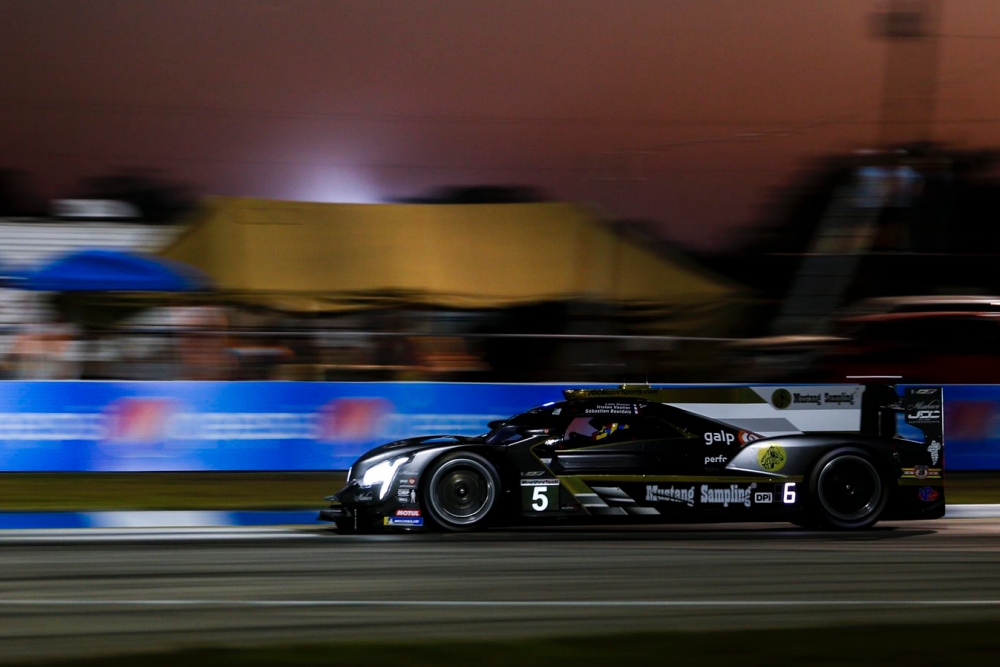 While normally my Travel Destinations Debrief columns feature lots of sections covering various topics after major sportscar races, the 2021 Sebring edition is going to focus on one subject: the Cadillac DPi. Why? Because it deserves our attention and respect after yet another huge IMSA endurance victory last weekend at the hands of JDC Miller Motorsport.

Cadillac’s future beyond the 2022 season in IMSA is currently an unknown. LMDh is coming and as it stands the GM brand has yet to commit going forward. In fact, due to the company’s reluctance to buy-in to a hybrid-powered future in motorsport, many industry observers believe Cadillac may well exit IMSA after 2022, making way for another marque in GM’s stable to compete in the LMDh category.

Should Cadillac depart IMSA, then it will leave a hole, after years of dominance in the championship’s headline events. The Caddy has been almost unbeatable in the major races since DPi began in 2017, winning the Rolex 24 and Sebring 12 Hours four times and Petit Le Mans twice. In fact it was such a fast and reliable prospect from Day 1 that IMSA forced Cadillac to change its engine for the second year of DPi to help balance the field…

However, after Wayne Taylor Racing stormed to victory at Daytona back in January this year, handing Acura its first Rolex 24 victory with the ARX-05, one could make the inference that Cadillac’s days as the top dog in IMSA were coming to an end. Not only had it lost its most decorated team (WTR) to its rival marque Acura as a replacement for the Penske effort, but it won at Daytona on its debut. It was no doubt a big blow.

Last weekend though, Cadillac showed once again that it can still win big races, as JDC Miller Motorsport stepped up to the plate this time to add another memorable victory to the DPi V.R’s tally. Acura may have taken the spoils at Rolex, but the Cadillac contingent clearly won’t be going down without a fight this season.

Until the Cadillac DPi is fully retired from racing, I fear many won’t appreciate how remarkable the car is. This is in part because it hasn’t had the chance to stretch its legs and prove its worth at Le Mans – which is a real shame.

For a time, there were rumours that DPi would be accepted into the Le Mans 24 Hours in its own class, or as part of a converged class with the WEC’s cars, with BoP governing the performance levels. But that idea never came to fruition; instead, the ACO and IMSA settled on a grander plan to allow both its forthcoming rulesets to compete with each other at Le Mans as part of the FIA WEC allowing LMDh cars to compete alongside Le Mans Hypercars from 2023 onwards. For this reason, the Cadillac will be remembered fondly by North America’s sportscar faithful, but not necessarily by the wider fanbase in Europe and Asia.

We shouldn’t forget how surprising the DPi V.R’s story is. The car is based on Dallara’s P217 chassis which in its LMP2 form has been a failure in the marketplace up against the might of ORECA’s 07. Beyond a freak win in the ELMS at Paul Ricard back in 2017 and a mercurial effort from Carlin in the Asian Le Mans Series back in 2019/20, the P217 has struggled almost everywhere it has raced.

The P217 suffers from ‘porpoising’ issues on its front-end, especially at high speed, which unsettles’s the balance of the car and makes it incredibly twitchy and unstable during more technical sections of a circuit. The Dallara is always fast in a straight line, but an ‘edgy’ prospect in medium and fast corners, and even more so in its low-downforce Le Mans configuration.

An attempt was made to rectify the issues when the ACO granted Dallara a ‘joker’ upgrade back in 2018, but the evolutions the Italian company released to customers made little difference. It is has therefore been fascinating to see Cadillac’s version of the P217 perform so well in IMSA.

It’s a tale of what might have been. The DPi V.R is a window on the changes Cadillac and Dallara wanted to make to the front aero of the LMP2 car. Had the Dallara been a more competitive prospect globally, then the entire marketplace – currently dominated by ORECA chassis – could look completely different right now, and certainly more competitive.

The Cadillac DPi V.R didn’t blow its competition away during last weekend’s race at Sebring, it did what it always does: remain consistently quick in every stage of the race. It appeared to be the only one of the three chassis in the class capable of building a lead too.

Sebring though, is never a simple race, and all seven cars in the class led at one point. But Cadillac’s effort never appeared to be faltering, even when its contending cars hit trouble. A heroic effort from Sebastien Bourdais late in the race was needed to seal the deal here, although it didn’t feel like a surprise to see the Mustang-Sampling liveried Cadillac on the top step of the podium.

Heading into Mid-Ohio it’s now one race win apiece for Cadillac and Acura, with Mazda still searching for its maiden win this year. It’s going to be a fascinating battle throughout the season. With competition still so hot in IMSA in 2021, ahould the Cadillac go on to win other major races like the 6 Hours at The Glen and Petit Le Mans later in the season, then the DPi V.R will surely have cemented its place in the pantheon of all-time great prototypes. It’s a car that is worth travelling thousands of miles to see. Trust me when I say that we’re living through a memorable era for sportscars in North America, and you will regret it if you don’t make the effort to see the Cadillac up close… 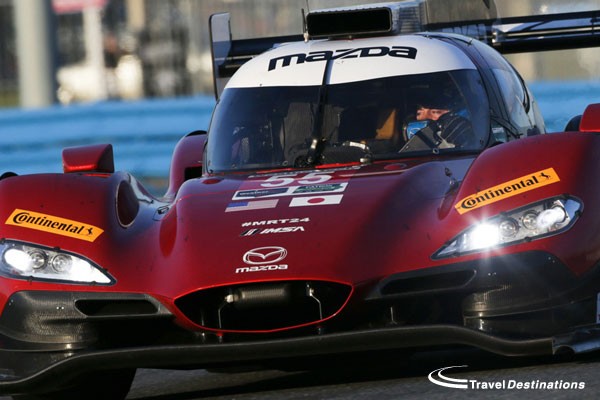 The dust is still settling after the Rolex 24 at Daytona and our man in  the stands has returned home having watched every second of the action. After the controversial finish, that saw Wayne Taylor Racing victorious & each driver walk away with a new watch, Stephen Kilbey reviews last weekend’s events.

Cadillac has a clear advantage
The debate on Balance of Performance was rampant at the Rolex 24 Hours, but unusually, in this instance concerning the prototype class rather than the GTs. Cadillac dominated the meeting at Daytona from start to finish, topping every practice session, qualifying and the race. The other DPis in the new class and the global LMP2s were still competitive at times, but only in certain conditions and during certain periods of the race. What we were left with was a fierce battle between Cadillac entries with rival teams Wayne Taylor Racing and Action Express at the end, which ended in dramatic fashion with a lead change in the final 10 minutes. The change in lead was controversial as contact was made causing the Action Express car to spin. Ultimately no further action was deemed necessary by the stewards so Wayne Taylor Racing took home the Rolex watches, and began the new era of North American prototype racing in fine style. But going forward, Mazda, ESM and the LMP2 teams are going to have to step up if they are to have any chance of fighting for the title or even winning races for the rest of the season.

The new prototypes impressed overall
A big question mark heading into the Rolex 24 was going to be the fragility and durability of the new prototypes, which were all making their global race debuts in South Florida. Everyone was left pleasantly surprised though, as despite various mechanical niggles and incidents up and down the field, there were no retirements until the 20 hour mark when the No.70 Mazda’s engine expired in a big way up and down the pit lane. There’s obviously room for improvement though, which in turn will create better racing as the season wears on. What we have though, is a class with serious potential, stunning looking cars, good sounding entries and manufacturer interest going forward. IMSA appears to have it right this time round.

Ford is the team to beat in GTLM
GTLM was arguably the most exciting class throughout this year’s Rolex 24 at Daytona, with four of the five manufactures represented having a shot to win the race in the closing stages. In the final two hours seven of the GTLM runners were competing for the lead, creating an absolutely thrilling end. Porsche with its new car, Corvette with its proven C7.R and Risi with its ultra-quick Ferrari all looked poised at various points, but in the end the four-car armada from the Blue Oval came out on top. All four GTs in the race made it home, and the No.66 of Sebastien Bourdais, Joey Hand and Dirk Muller in particular was the class of the field for a significant portion of the race before winning it all at the end. The Ford GT is now both reliable and fast, with a set of drivers in its two full-season entries that can go toe-to-toe with the best the class has to offer. Corvette won the title last year, but this time round Ford surely has to be the team to beat?

Alegra surprised us all
In one of the most incredible runs to the flag in recent memory, Alegra Motorsports’ GTD Porsche 911 GT3R managed to storm to the win in the Rolex 24, after spending 22 of the 24 hours biding its time climbing the order. Up against arguably the best and most diverse GT3 field ever assembled on American soil, Alegra Motorsports proved that staying on the lead lap and ensuring your star driver is in at the end is the key to winning. Daniel Morad, Carlos de Quesada, Michael de Quesada, Jesse Lazare and Michael Christensen all combined for a historic run for Porsche, cruising into Parc Ferme with no scratches on the car after the race. Alegra’s entry was supposedly a one-off, but after such an incredible performance by the Canadian outfit, surely further appearances will spawn off the back of its success?

LMPC’s tenure has run its course
After eight years, the LMPC class with the spec Oreca FLM09 chassis is way past its expiry date. The racing wasn’t great, with performance Tech winning by over 20 laps, and the driving standards were mostly poor as well. Starworks and BAR 1’s entries spent way too much time in walls or on the grass in the treacherous conditions, causing multiple safety car periods which prevented the whole race from ever becoming rhythmic. Originally a class with a sole purpose to bolster the American Le Mans Series grid during tough years, it has now run its course. The cars are old, the interest is now minimal and the field overall is so strong that it feels a redundant class. As of next year the class will be written out of the rule book, and that’s a good thing, but it is going to be interesting to see what the current teams in the class will do, given the opportunity to step up to LMP2 or race in GTD/GTLM in the future.

Travel Destinations was pleased to host another great group of race fans at this years’ Rolex 24 at Daytona. We will be back again in January 2018 so if you would like to join us please do register with us now to be the first to receive all the details.