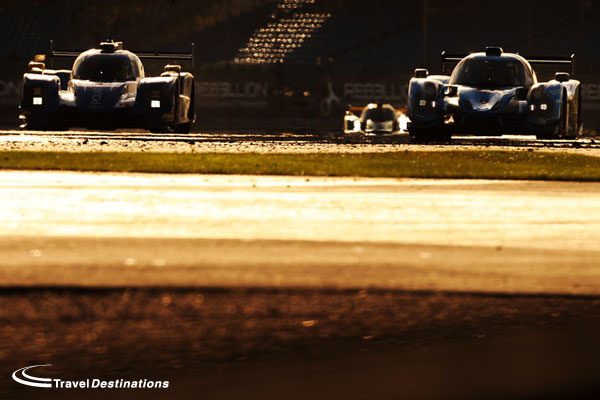 Easter weekend saw Silverstone host the first race in the 2017 FIA World Endurance Championship. As always our man in the stands was present to record all the action. Below is his summary of what we all learned from another great race in the FIA WEC.

1. Porsche’s low-downforce aero is scary
Porsche LMP1 Team will head to Spa and Le Mans confident. It didn’t win at Silverstone, but going into the weekend it felt it was very unlikely. Porsche opted to use its low-downforce aerodynamic package for its 919s – which doesn’t suit the ‘Home of British Motorsport’s’ sweeping bends and medium speed corners – to continue its development pre-Le Mans. Toyota on the other hand, used its high-downforce kit in an attempt to start the season on a high. Prior to the weekend the team assumed it would be somewhere in the region of two seconds a lap slower because of this, where in reality it was closer to one second. The result? Porsche was able to stay on the lead lap in the first half of the race, and challenge for the win after the Saftey Car went in in the closing stages. The team’s #2 919 of Earl Bamber, Brendon Hartley and Timo Bernhard ended up leading in the final hour, with Toyota’s Sebastian Buemi taking the lead with fresher tyres in the final 15 minutes.

Toyota won the race, but Porsche will be extremely satisfied by its potential when the high-downforce kit it will use after Le Mans comes into play.

2. The GTE Am title race looks to be a corker!
The finale to the 6 Hours of Silverstone saw major drama in the LMGTE Am division, with Pedro Lamy and Miguel Molina colliding at Stowe while battling for the lead, allowing Clearwater Racing’s Matt Griffin to snatch the lead just a handful corners from the end on the final lap to take the win. Am was a hotly contested class throughout, and while Aston Martin Racing led most of it – before Lamy limped home second – Clearwater Racing and Spirit of Race were in the fight until the end. Aston Martin Racing has been here before with Paul Dalla Lana, Mathias Lauda and Lamy, while Clearwater and Spirit of Race are new to the WEC and once up to speed have the potential to take the title to the wire.

GTE Pro looks a lot tighter this year, and with the addition of a close-knit Am battle, GTE in general could provide fans with the best racing action all season.

3. Plenty of intrigue in LMP2
The new-look LMP2 class in the WEC, while not good on the diversity front, produced some great racing and a surprise winner. Throughout the weekend it seemed that either G-Drive Racing or Signatech Alpine would take the win, but the #38 Jackie Chan DC Racing Oreca of Oliver Jarvis, Thomas Laurent and Ho-Pin Tung prevailed and finished on top. During the race the action was close, though the nature of the entire field being Gibson-engined Orecas did make it visibly difficult for drivers to overtake, even with traffic. It should be a close title race though, as there’s clearly four or five cars which have the potential to win multiple races.

In driver terms, while the usual names featured, Matthieu Vaxiviere shone for TDS Racing, steering the team to a podium finish by race end after an astonishing final stint. Emmanuel Collard in his return to prototype racing impressed too, as did gentlemen driver Francois Perrodo, who in his prototype debut was able to lap with the other drivers in the class of his driver grading admirably.

4. Toyota’s serviceability gets a thumbs up
While it’s always hard to take positives from a big accident, WEC debutant Jose-Maria Lopez’s shunt at Copse provided Toyota Gazoo Racing with some valuable in-race practice of repairing the new TS050. All signs are positive, as the car – which didn’t have much left of its front-end after the impact – was out after just an hour in the garage. It was therefore able to finish fourth in LMP1, scoring valuable points. That sort of practice could come in very useful at a race like Le Mans, where the Japanese team will have three cars and will look to turn a car into a Guinea pig should it get caught up in an incident during the race.

5. Ford looks strong in Pro
The Ford GT now looks like the car which we all thought it would be last year. Harry Tincknell (who notably had the drive of his life), Andy Priaulx and Pipo Derani combined to hand the UK Chip Ganassi team the win in their #67 GT, which should have been the headline for a Ford 1-2.

The No.66 ran with it, but faded late in the race after running 1-2 at the top for much of the middle-stint. Nevertheless the car appears to hold the advantage early doors in the title race, and with no BoP adjustments until the round at the Nürburgring (though at Le Mans there will be a separate BoP process), the No.67 crew should be odds on for a good result at Spa. It must be noted though, that the new Porsche 911 fared well and scored a podium (though one did retire after an engine fire) and AF Corse’s 488s came on strong in the race on the performance front, making for a thrilling battle between the three teams.

Aston Martin Racing meanwhile, will have some work to do prior to Spa, as it failed to feature at all, with a lack of raw pace which prevented either one of its cars challenging for a podium.

The FIA WEC moves on to Spa-Francochamps from the 4th – 7th May. The last opportunity to see the cars in action before Le Mans. Please call us for last minute ticket details.
Of course we will all be at Le Mans for the biggest race of the year on the 17th – 18th June. We do have some ticket availability for the 24 hours. Please call for us for further details.
Then the final European round of the FIA WEC takes place at the Nurburgring from the 14th – 17th July. We have trackside camping available for this event. Please call us to book.