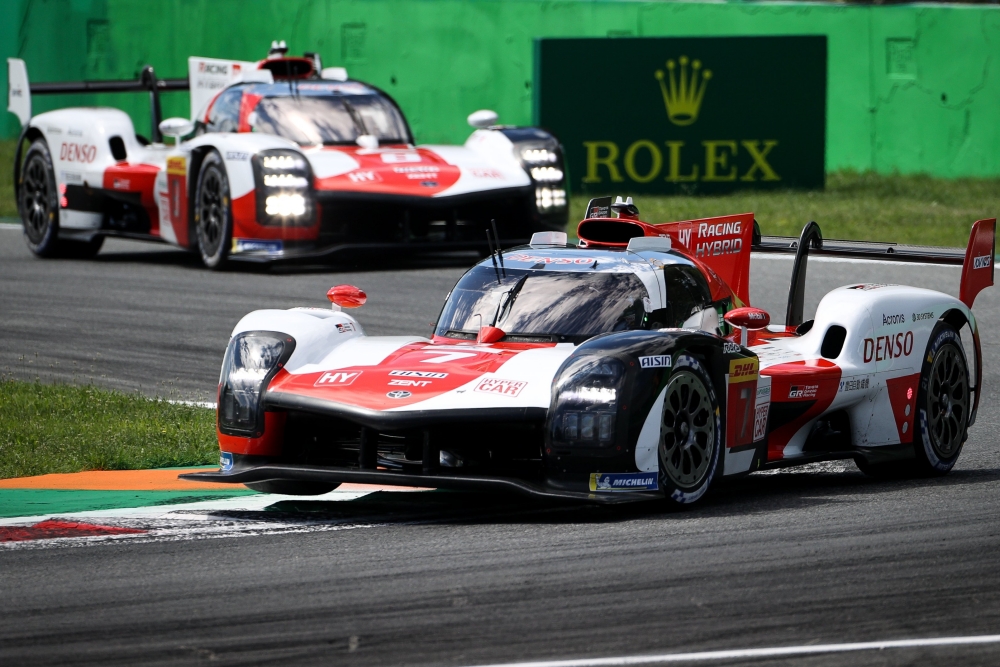 The fans were back and so was the sunshine last weekend as the FIA WEC teams took to the ‘Temple of Speed’ for the first time in competitive conditions. Yes the FIA WEC has visited Monza in the past, but that was for a Prologue test, this weekend it was different, the gloves were off. While the 6 Hours of Spa is traditionally the final dress rehearsal for Le Mans, this year’s maiden race at Monza played host to the final race before the the teams and drivers hit the track at the Circuit de la Sarthe.

So what did we learn ahead of the biggest sportscar race of the year?

A quick glance of the headlines after Sunday’s race wouldn’t have given you a sense of how this race panned out. Yes the No. 7 crew of Mike Conway, Kamui Kobayashi and Jose Maria Lopez scored their first win of the season, but it wasn’t plain sailing.

The trio were clearly the fastest in the class throughout practice and qualifying, and during the race. But in the second half of the race things began to unravel. A puncture and a technical error forced Kobayashi to stop on track and undergo a power cycle which cost the team over a minute — and the lead — with just under two hours to go.

The No. 7 crew had to spend the final third of the race battling back to win, helped by a late-race full-course yellow which allowed the No. 7 to serve its final stop in neutralized conditions. It was rotten luck for Alpine which looked set to be in the running for the win in the final hour, but instead saw its A480 go from leading to trailing the No. 7 for no fault of their own.

Then there’s Toyota’s other car, the No. 8 of Brendon Hartley, Kazuki Nakajima and Sebastien Buemi, which had a torrid time. Its chances of a strong finish were ruined early when the car suffered a series of issues. Brendon Hartley was given a fright when a part failed on the front end in the braking zone for Turn 1 in the second hour, causing him to go straight on and forcing him to avoid a slower GTE car. The car then stopped due to a fuel pressure issue.

“It’s not their day — we are looking at fuel pressure,” explained team director Rob Leupen from the Toyota pit box. “We’ve changed the fuel collector and taken everything apart around the fuel tank. Two issues; the first was related to fuel pressure, created by settings, the second is something we need to investigate.”

The car was forced to run short stints as a result and finished 43 laps down.

Alpine may not have had the raw pace, but it did have reliability on this occasion. At Le Mans, this could prove to be a vital trait. If over a single lap the A480 can’t match the new-for-2021 GR010s, but over the course of a race, it can spent less time in the garage, then it will be game on and the French marque could see the ultimate return on its investment.

Its drivers, Andre Negrao, Nicolas Lapierre and Matthieu Vaxiviere may leave Italy slightly disappointed that the win evaded them, but will head to Le Mans in the knowledge that a huge result is possible if Toyota’s new cars faulter.

Neither of Jim Glickenhaus’ 007s made the overall podium, and on a day when both Toyotas hit trouble. However, a look at the bigger picture will tell you that there was a lot to be cheerful about for the US-flagged team after its first race with both cars.

The 007 is a new car, it’s been designed and manufactured with a budget nowhere close to Toyota, and hasn’t completed anywhere near as many miles in testing as the GR010. The car clearly has a lot of potential though and its performance at Monza gave us a taste of what the team hopes will come in time.

In terms of pace, it was a more encouraging outing, with the #709 able to go toe-to-toe with Alpine throughout, which translated into a brief period spent leading the race when the No. 7 ground to a halt. A late-race brake change cost the team a podium shot, but for Romain Dumas, Franck Mailleux and Richard Westbrook, a fourth place overall finish (and third in class) was well deserved.

The sister car suffered multiple woes, including starting the race down on power, with just 7 cylinders. This is to be expected though, as the car is effectively being tested in public, something that’s not ideal, even though it allows the team and its drivers to get a real sense of where they are ahead of Le Mans.

At La Sarthe it’s hard to see Glickenhaus managing to secure a place on the overall podium, the cars just don’t seem quite ready to do battle for 24 hours. But, if they can keep it clean and put pressure on Toyota and Alpine then that will serve as a victory of sorts. Jim Glickenhaus knows what it takes to make the finish in a 24-hour race, after years spent competing at the Nurburgring. August’s Le Mans will prove to be a different challenge. It’s a different animal to the N24, mainly because it’s an event with real prestige and international appeal.

In a few weeks time, Glickenhaus will be on the world stage, here’s hoping it puts on a show….

What of the other classes?

Outside of the Le Mans Hypercar category the other races within the race delivered excitement too.

LMP2 was controlled from the word ‘go’ by United Autosports’ ORECA, Phil Hanson, Filipe Albuquerque and Fabio Scherer. It was another faultless performance from Richard Dean’s team, which has taken firm control of the title race with a second win in three races.

The majority of the opposition to United came in the form of Racing Team Nederland, Inter Europol and JOTA’s ORECAs, but all three teams were impacted by penalties or mechanical troubles. The only contenting team that had a clean run was WRT. The Belgian GT3 regular looked strong throughout but its drivers – Robin Frijns, Ferdinand Habsburg and Charles Milesi – were unable to mount a real challenge for the lead.

In the GTE classes, even without much FCY or safety car intervention, the race reached a crescendo at the very end. In Pro there was little to separate Porsche and Ferrari, though Kevin Estre and Neel Jani in the No. 92 911 RSR 19 had a slight edge which proved to be the deciding factor.

AF Corse’s No. 52 Ferrari came achingly close to snatching the lead at the end, but a late splash was required for Alessandro Pier Guidi, sealing Porsche’s victory. Estre said he was ‘prepared to make the car wide’ at the end if AF Corse didn’t need a late stop, though it may have come as a relief that a defensive drive wasn’t necessary.

Pier Guidi caught up, looked poised to make a move that would cause the Tifosi trackside to erupt, but had to dive into the pits. Nevertheless it was a dramatic end to a superb contest. If at Le Mans Ferrari and Porsche are neck and neck, and Corvette can get involved too, then GTE Pro looks set to stun.

It was a similar story in GTE Am, though the fierce late-race fighting wasn’t for the lead, instead it was for the other podium spaces. AF Corse’s No. 83 Ferrari stormed to victory from the back of the grid and looked strong throughout, leading home a pair of Aston Martins that were going at it ‘hammer and tongs’.

Augusto Farfus prevailed in the No. 98 Aston Martin Racing Vantage, passing Tomonobu Fujii on the final lap to take second. The move came after multiple sequences of side-by-side running, as the Brazillian pushed as hard as he could to get in front. Superb, clean racing.

The only disappointment was that a third Aston wasn’t in play. TF Sport looked odds on to win the class early, before a blowout destroyed the left-front corner of the team’s Vantage on the run down to Ascari. It was heartbreak for Ben Keating and his teammates, who will be out for revenge in France.