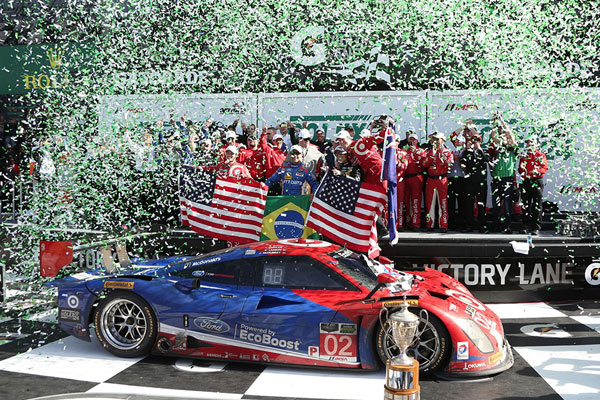 Chip Ganassi Racing’s “Star Car” lived up to its billing in the 53rd Rolex 24 At Daytona. With a lineup of IndyCar’s Scott Dixon and Tony Kanaan joined by NASCAR Sprint Cup Series regulars Jamie McMurray and Kyle Larson, the No. 02 Target Ford EcoBoost/Riley prevailed in a hard-fought battle with Action Express Racing and Wayne Taylor Racing to win the opening round of the 2015 TUDOR United SportsCar Championship.

The race came down to a seven-minute, 30-second sprint to the finish, with Dixon holding off defending race winner Sebastien Bourdais by 2.267 seconds at the checkered flag.

The victory enabled McMurray to join A.J. Foyt and Mario Andretti as the only drivers to win both the Daytona 500 and Rolex 24. Dixon won the Rolex 24 for the second time – winning in the Ganassi No. 02 in 2006 – while Kanaan and Larson joined McMurray in winning the event for the first time. It was Ganassi Racing’s sixth Rolex 24 triumph in 12 attempts.

The race shaped up as a shootout between Dixon and Jordan Taylor. However, a miscalculation over the latter’s driving time brought the No. 10 Konica Minolta Corvette DP to the pits during the final caution. Ricky Taylor took over, served a penalty for pitting out of sequence and finished third, giving the team its third consecutive podium in the event.

Bourdais moved into second in the closing minutes but could not challenge Dixon, joining Joao Barbosa and Christian Fittipaldi in giving the 2014-winning No. 5 Mustang Sampling Corvette DP a second-place finish.

The latter half of the race was a four-car, back-and-forth battle among the eventual top-three finishers and the No. 01 Ford EcoBoost/Riley of Scott Pruett, Joey Hand, Charlie Kimball and Sage Karam throughout the final 12 hours. However, clutch problems with two hours, 30 minutes remaining dropped the No. 01 car from contention, ending Pruett’s bid to become the lone six-time overall winner of the Rolex 24.

Second, one lap down, was the pole-winning No. 16 BAR1 Motorsports Autosport Designs/Top 1 Oil ORECA of Johnny Mowlem, Tom Papadopoulos, Tomy Drissi, Brian Alder and Martin Plowman. The No. 54 CORE autosport Composite Resources/Flex-Box ORECA FLM09 of Ben Keating, Colin Braun, James Gue and Mark Wilkins held a multi-lap lead for much of the event. With 20 minutes remaining, Braun had contact with a Prototype and spun.

He returned to the circuit, only to spin at the exit of the chicane after experiencing suspension failure. The car then hit the wall and caught fire. The car completed enough laps to finish third in the class.

Corvette on the top step of the podium
A 24-hour race came down to a seven-and-a-half minute sprint to the checkered flag in the 53rd Rolex 24 At Daytona with the No. 3 Corvette Racing Chevrolet Corvette C7.R beating the No. 25 BMW Z4 GTE from BMW Team RLL to the stripe by a mere 0.478 seconds. The GT Le Mans (GTLM) class win was Corvette Racing’s first class victory at the Rolex 24 since 2001.

It was a Corvette vs. BMW battle for much of the final quarter of the race with Antonio Garcia holding a comfortable lead in his Corvette over Dirk Werner’s BMW with 20 minutes remaining. That lead quickly evaporated, however, when Prototype Challenge (PC) class leader Colin Braun made contact with the wall coming out of the chicane on the backstretch forcing a full-course caution period. Werner closed the gap throughout the final six laps, but fell just short at the checkered flag with Garcia joining co-drivers Jan Magnussen and Ryan Briscoe in the victory.

“Every time you win here it’s very, very special,” Garcia said. “I’ve been chasing this victory since 2009, even if I won it back then. This is a very unique race. It’s the first race of the year, so it’s very difficult to be at 100 percent right away for the team and for the drivers. Everything ran perfect, and as Ryan (Briscoe) said, we just kept our nose clean, and I had the best car to fight on the last eight minutes of the race.”

Garcia won the Rolex 24 overall in 2009 for Brumos Racing. Corvette Racing did not compete at Daytona from 2002 through 2013 before joining the TUDOR United SportsCar Championship for its inaugural 2014 season.

The No. 4 Corvette Racing Corvette C7.R entry of Tommy Milner, Oliver Gavin and Simon Pagenaud was in contention for the race win, but lost four laps after making contact with the No. 66 RG Racing BMW Dinan/Riley Prototype with three hours remaining and finished third.

No. 93 Viper Team Takes Emotional Victory in GT Daytona
The No. 93 TI Automotive/ViperExchange.com Dodge Viper SRT GT3-R and drivers Ben Keating, Al Carter, Dominik Farnbacher, Kuno Wittmer and Cameron Lawrence had the field covered for much of the Rolex 24 in the GT Daytona (GTD) class. They found a challenge from the No. 22 WeatherTech Racing Porsche 911 GT America of Cooper MacNeil, Leh Keen, Andrew Davis and Shane van Gisbergen — the two cars combined to lead the final 209 laps of the race — but Farnbacher led the last 49 circuits en route to a 7.588 second victory.

“For everybody in the room and the fans and everybody, we’re not just weekend warriors that are weekend hires,” Wittmer said. “We’re family; we’re more than that. We’ve worked together since 2012, and some of us before that. Yeah, unfortunately our program got pulled, but I think it’s the cooperation of Ben Keating and Bill Riley and some others that were able to retain us family, keep us together and get it going.”