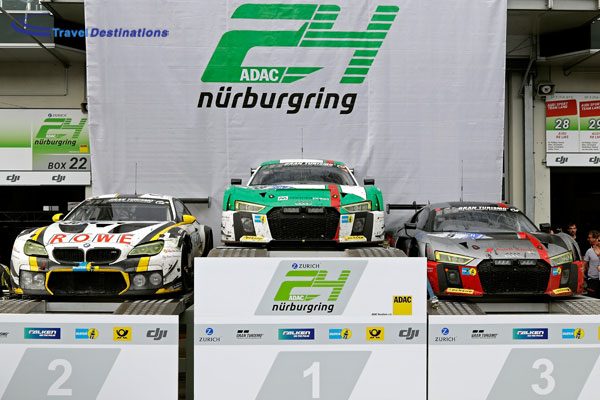 What looked like a certain 1-2 finish for Audi in this year’s Nürburgring 24 Hours, with Land Motorsport crossing the line with a comfortable margin over the chasing WRT R8 LMS, went out the window with two hours of the race to play. Prior to the penultimate round of scheduled stops, the No.29 Land Audi of Markus Winkelhock, Connor Di Phillippi, Kelvin Van der Linde and Chris Mies had led 125 laps, which in Nürburgring 24 Hours terms is pretty much the entire race. But a software glitch caused Van der Linde to slow after the stop, forcing the team to pit him again to reset a faulty sensor. It cost them the lead, and then second, as their hopes of scoring a first win as a team appeared to vanish. But the Nürburgring Nordschleife wouldn’t be the Nürburgring Nordschleife without a surprise change of weather. The forecast all week was bone dry, with mid to high 20s for all the track action. By race day, even with many drivers having competed in VLN 1, VLN 2 and the Qualification Race prior to the N24, nobody had a single lap on rain tyres. Suffice to say, the late-race shower threw a spanner in the works, and with a little over 30 minutes of racing left the race swung back to Land. WRT and the second-place ROWE Racing BMW M6 GT3 had just pitted when the rain was first reported, but opted to stay on slicks for the final dash to the flag. Then van der Linde came in, and after a fumbled fuel stop, causing the team to lose further time, the decision was made to gamble on wets as a last roll of the dice. With the South African making his way round the GP loop of the ‘Ring, the TV cameras cut to the end of the lap, where cars were seen battling heavy rain, and down to walking pace on the wrong-rubber. It was the perfect storm (pun intended), and the Land crew went from drowning in sorrow, to crowding around the screens willing on their lead car. Van der Linde, predictably, slalomed through the traffic, eventually taking the lead at the start of the final lap with Rene Rast and Nicky Catsburg deciding to pit the WRT Audi and ROWE BMW for wets with just one lap to go as a means of damage limitation. So, after a final tour of the grueling, rain-soaked circuit, Van der Linde crossed the line first. It was a landmark win, with Van der Linde becoming the first ever South African, and in fact, African to win the race, Di Philippi just the second American, and Land the team responsible for Audi’s fourth N24 victory; its fourth in five years too. With WRT’s sole-remaining Audi coming home second, it was also a 1-2 for the Ingolstadt-based brand.

How did the other manufacturers fare? Like many of the front-running teams, the race proved costly despite the good weather, with multiple on-track incidents taking out pre-race contenders. Along with WRT and Land’s second Audis, the lead Manthey and Falken Porsches, Pole-sitting Traum Glickenhaus and top-five running Schnitzer BMW all crashed out. Lamborghini’s single Huracan from Konrad Motorsport also failed to finish, retiring out on circuit after a fire, and the three Bentley’s failed to feature. The ABT-run Continentals, after positive outings in the VLN prior to race-week, had neither front-running pace, or consistency. The Wockenspiegel Team Monshau Ferrari meanwhile, had an impressive run to seventh place, with its Pro-Am lineup driving well throughout the week, keeping the single 488 GT3 entered, in the running. Mercedes was the other big brand in with a shout, and after its 1-2-3-4 finish in 2016, didn’t have the ultimate pace to challenge for the podium after the halfway mark. The AMG-backed AMG GT3s from HTP Motorsport and Black Falcon didn’t lead at any point, the defending champions in the No.1 Black Falcon entry eventually finishing fifth, while HTP’s No.50, which was high up the order the entire race, crashed out on the final lap in the rain. Outside of the top SP9 class, the Kissing Motorsport Opel Manta – which has built a cult following over the past decade or two – unfortunately didn’t see the checkered flag. The car, which usually runs a steady race, spending extended time in the garage after offs and mechanical difficulties, before retiring. The big story of the many fan-favourite entries went to Aston Martin as a result. The Lagonda team’s Vantage GT8 – with WEC drivers Darren Turner and Nicki Thiim driving – climbed the order, as expected, finishing an impressive 21st, and top of the SP8 class standings.

The 2017 Nürburgring didn’t disappoint. It featured a world-class field, which in the end provided drama, and an ending which will be remembered for years to come. But it feels like we always end up saying that? Because it’s a special race, which thrives on un-predictability, producing a thrilling 24-hour encounter every year. The 45th running, was no exception.

The Travel Destinations trackside campsite was another sell out in 2017. Thanks to everyone who came with us. We will be back again in 2018. The provisional dates for the race are the 10th – 13th May 2018. If you would like to stay with us trackside you can register with us now.