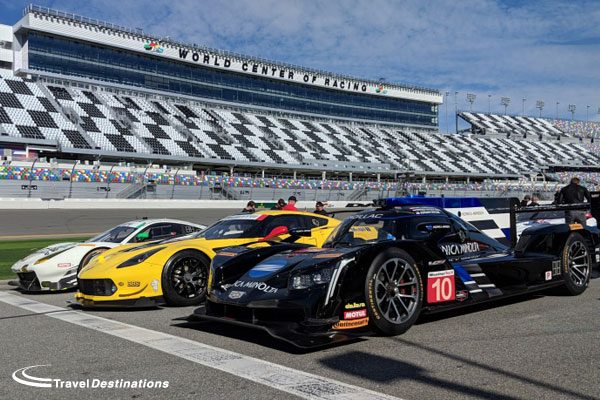 This weekend sees the beginning of the Sports Car season in the USA, with annual curtain raiser; the Rolex 24 at Daytona. For many this event always marks the beginning of the season and the event has always attracted an exceptional grid of cars and drivers. As you would expect, Travel Destinations always has a presence track-side and our travellers are already in Florida, ably supported by our resident Daytona expert, Helen.

Here we look at the key storylines that they will see develop first-hand over the weekend. If this tempts you to see more, then make sure you register with us to be the first to learn of our plans for next year. Maybe you can join us too!

Five key storylines to follow during the 2018 Rolex 24 Hours

It has to be said right off the bat that the favourite for the 2018 Rolex 24 has to be Cadillac. Last year, the GM marque’s DPi V.R won its debut at Daytona, and went on to take the overall and NAEC titles up front, led by Wayne Taylor Racing’s effort that at times was unstoppable. This year there has been plenty of changes, but there’s just as good of a chance for Cadillac’s customer outfits to take the win again.

In terms of the car, it’ll race with changes to the front splitter, as part of the ACO’s permitted ‘Joker’ evolutions to Dallara’s P217, which the Caddy is based on. It’ll also utilise a brand new 5.5 litre engine rather than a 6.2 example, in an attempt by Cadillac to streamline its engine philosophy with the rest of the paddock. There are four cars hoping to score Caddy its second win in a row. At Wayne Taylor Racing, its driver line-up has been shuffled, Jordan Taylor returns from last year, but will be joined by Renger Van Der Zande and IndyCar star Ryan Hunter Real for the racing; it’s a trio very much capable of winning it all again. 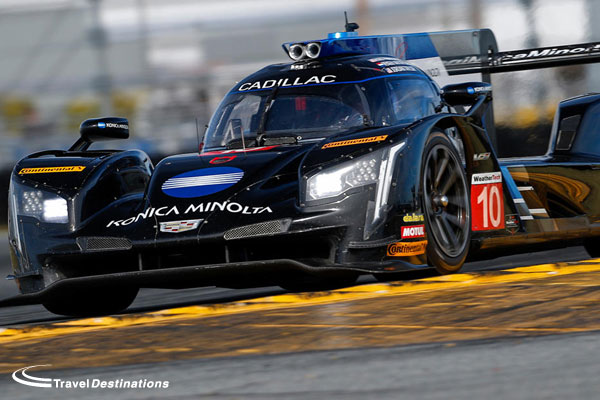 Action Express’ two cars also have some new drivers in, including ex-F1 driver Felipe Nasr and British GT racer Stuart Middleton. After coming so close last year, can either its Whelen or Mustang Sampling machines reach the top step of the podium in 2018?

The final entrant is a new one, Spirit of Daytona (formally Visit Florida Racing), which switches from running an LMP2 Riley and later a Ligier last year, becoming the only LMP2 team to win an IMSA race overall, with a victory at Laguna Seca. For its new machine, it’s got three new drivers too, Matt McMurry, Tristan Vautier and Eddie Cheever III taking the wheel. Can Spirit of Daytona spring a surprise here?

How will the new DPi efforts fare?

Outside of the Cadillac and the other pre-existing DPi effort from ESM, there’s two new players in town for this season in the form of Team Joest (yes, that Team Joest that ran for almost two decades with Audi) and Team Penske (yes, that Team Penske that won Sebring overall in 2008 with an LMP2 car). Joest will be running the Mazda DPi programme. While the RT-24P is not a new car – it ran for most of the year in 2017 with Speedsource – it certainly has more potential now after an underwhelming first season.

Multimatic and Joest have gone to great lengths to re-design the aspects of the car which proved to be weak, and have signed some new driver talent to add extra punch too. Amongst the newcomers are Ford WEC driver Harry Tincknell and ex-Audi LMP1 drivers Rene Rast and Oliver Jarvis. 2018 will be a really important year, and while few will expect Joest to blow away the field in its first run with the Mazdas, would anybody be surprised if it did with its well documented track record?

Meanwhile, Team Penske is also due to burst onto the scene at Daytona, with a pair of brand new Acura ARX-05. The legendary American outfit is returning to sportscar racing, and in a big way, running the factory programme for the marque in which it spent years racing against back in the American Le Mans days early in the 21st century. The ARX-05 is based on the ORECA 07, which is a very good starting point, as the best LMP2 car top to bottom of the current crop, it’ll also be driven by some stunning drivers. For the big race it’s fate rests on a collection of sportscar talent, ex-F1 talent and IndyCar stars that’s enough to make any racing fan drool. Juan Pablo Montoya, Dane Cameron, Simon Pagenaud make up the #6’s crew, while Helio Castroneves, Ricky Taylor and Graham Rahal will share the #7. Which of these two VERY high profile new efforts will have the better time in Florida? Time will tell!

All eyes on Alonso

It is safe to say that you can’t pick out the key names in the prototype entry for this year’s Rolex without mentioning Fernando Alonso. The Spaniard, a two-time F1 World champion, seems set on achieving the ‘Triple Crown’ of wins at Monaco, Le Mans and Indy. It’s refreshing to see someone so consumed by the F1 ‘bubble’ take a walk on the wild side and want to race elsewhere in gaps between F1 races. 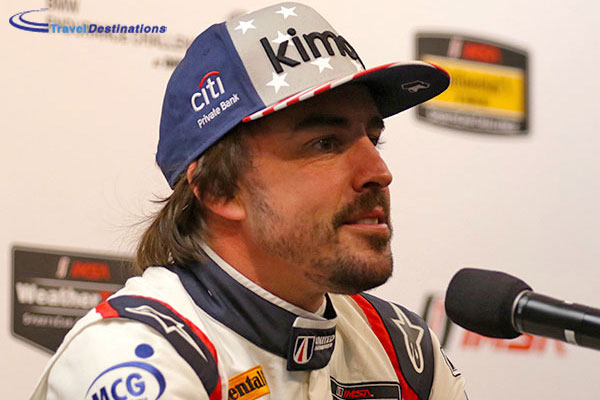 For the Rolex 24 at Daytona, which will be Alonso’s first sportscar race, he’ll be driving under the very capable supervision of United Autosport, which is co-run by McLaren’s Zak Brown. He’ll drive the evolved Ligier JS P217, with Phil Hanson (an ELMS and WEC starter) and future F1 star Lando Norris.  That may not sound like a ‘Super Team’, but in reality, that doesn’t necessarily matter. At Daytona, staying on the lead lap will keep you in the fight for the win right up to the flag; it’s that sort of race. Are Norris, Hanson and Alonso capable of doing that? Yes. And even so, this is a trial run of sorts for Alonso, ahead of a potential Le Mans debut this year. He will nevertheless take this seriously, and attract the world’s media to the event, which can only be a good thing for sportscars. This is a big story, and one which the sportscar world is and should welcome with open arms.

Further down the entry list, the GT classes will, as usual, add spice to an already tantalising prototype field. In among the factory teams in GTLM is BMW Team RLL, tasked with debuting the BMW M8 GTE at Daytona. Now, the car was delayed in its development due to a late re-design forced upon the marque, but it has the potential to turn heads. At the pre-race Roar test, it was the slowest of the GTE cars, but it is new, and GTE is a balanced formula which means it should be able to compete right away during the 24 Hours. 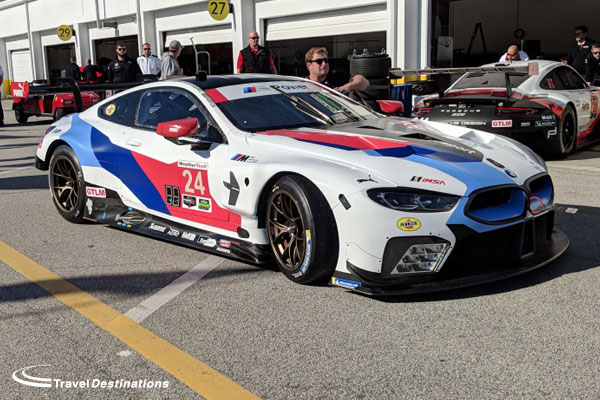 In terms of driving talent, there has been some changes in camp BMW. In its #24 M8, former WTCC ace Augusto Farfus returns (after competing only at Daytona last year), and will drive with brand stalwart John Edwards, Jesse Krohn who’s stepping up from GTD and Nicky Catsburg. And in the #25, Alex Sims returns for another year of GTLM action, along with, veteran driver Bill Auberlen, IMSA debutant (and 2018 BMW DTM driver) Phillip Eng and American BMW newcomer Connor De Phillippi, who moves over from Audi after winning the 2017 N24 and 2016 ADAC GT title. With a set of drivers that strong, the real challenge will likely be staying reliable, up against a field of near-bullet proof machinery from Corvette, Ferrari, Porsche and Ford.

If the M8 GTEs keep going round and round, who knows where they’ll end up come Sunday afternoon?

Battle of the GTD Brands

The other GT class, GTD, is also a battle of the brands, but on a larger scale. With 21 cars on the list, representing eight manufacturers, it’s almost guaranteed to be a thrilling race for the win. This year, there’s no new kit, but there are plenty of big names and big teams on the list; and because last year’s class winner Alegra Motorsports aren’t due to make the trip, there will be a new winner.

Audi will run two R8s, Porsche will have a trio of 911 GT3 Rs, BMW will have an M6 GT3, Lamborghini is set to have three Huracans, Acura meanwhile has three NSX GT3s in addition to three AMG GT3 , two Lexus RCF GT3s and four Ferrari 488s.

At this point, it’s nearly impossible to pick a winner, so instead, just sit back and watch this one unfold.