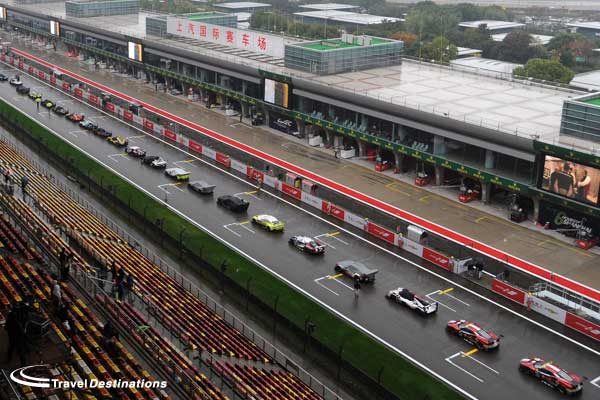 The 2018 leg of the FIA World Endurance Championship 2018/19 ‘Super Season’ is now over. There are three races left and a whole lot still to play for. The weekend in Shanghai certainly had a different feel to it, with far more positivity across the four classes than we’ve seen all season. The racing was good; albeit in tough conditions, and has left us with plenty to look forward to when the season resumes next March at Sebring.

More poor weather
Once again the FIA WEC had to battle through poor weather conditions in China. Heavy rain and low visibility were the order of the day for the race and that prevented the race from running for the entire six hours. However, the race officials once again excelled themselves in making smart, prompt decisions to keep the race going as long as possible. 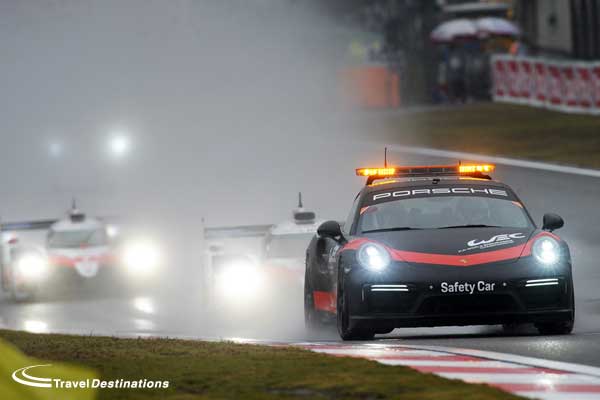 The red flags had to make two appearances in the race, which even started under safety car conditions. But the second half of the race ran smoothly, and actually, produced some memorable action as the weather improved. The only real issue the organisers were left to tackle was the fading light at the end of the race, which saw rain and darkness produce an alarming finish to the race for many of the drivers mid-pack who struggled to fight through the spray.

GTE Pro producing the goods
The best racing was found in the GTE Pro class, once again, and it’s clear that the class is becoming closer between the five marques taking on the full season. Not only was the racing door-to-door, but it produced a historic result too, with Aston Martin Racing’s new Vantage AMR scoring its first ever win. Nicki Thiim and Marco Sorensen in the No.95 were the victors and were masterful in the tricky conditions, aided by strategy calls from the team. Thiim, in particular, had an impressive run in the second half of the race, storming through the field from fourth in the fifth hour after the safety car for the ByKolles CLM catching fire on the pit straight to take control of the race, before Sorensen kept his cool at the end. 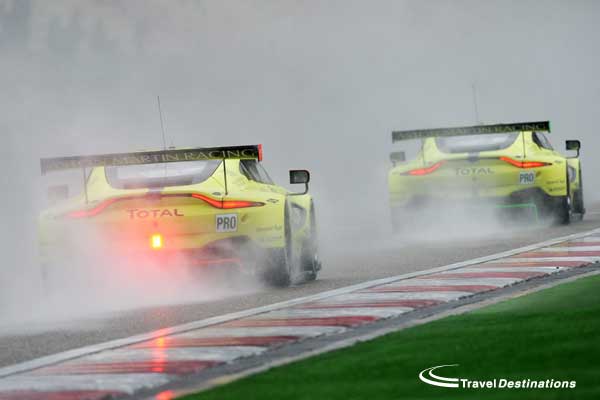 Behind the Aston, Richard Lietz steered the No.91 Porsche to second in the class after getting past Tom Blomqvist’s No.82 BMW (which faded away), Davide Rigon’s No.71 Ferrari and Alex Lynn’s No.97 Aston Martin (which fell to fourth) during his stint. The championship-leading No.92 Porsche meanwhile, finished up third, pushing the No.97 to fourth at the very end, when Michael Christensen muscled his way past Maxime Martin in the dash to the flag after the final safety car period.

The key here is that Aston Martin is now very much in the fight. BMW has work to do. Its car is quick in the right conditions, but struggles when things get changeable. While AMR would need a remarkable run through Sebring, Spa and Le Mans next year to get in the title hunt, the British team building up to a title challenge in 2019/20 will be the priority.

It must be mentioned that Corvette ran in China, making its first FIA WEC appearance (Le Mans aside) since CoTA 2014. While Oliver Gavin and Tommy Milner enjoyed the challenge of taking on the FIA WEC’s Pro field, on unfamiliar ground, it wasn’t easy. Despite making bold strategy calls during the race in an attempt to gain any sort of advantage, they failed to feature and finished eighth. Neither driver could extract enough pace out of the C7.R to keep up in the mixed conditions.

LMP1 getting closer
LMP1 is tightening up, with Equivalence of Technology changes before the race helping keep the privateers within arm’s length for the first time. The race itself, unfortunately, didn’t give us a true flavour of what’s to come, because Toyota won comfortably again, in part because the race didn’t run for the full six hours, and the weather was poor. 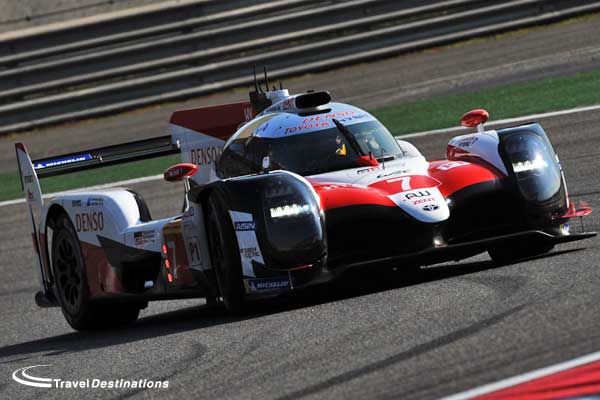 However, in qualifying, it was tight. The pole-winning car this time was the No.7 Toyota TS050 HYBRID, which went on to win, after Mike Conway and Kamui Kobayashi combined to set a pole-winning 1:42.931. Between the fastest Toyota and privateer, though, it was as tight as it’s been this season. The No.1 Rebellion R-13 came closest, Andre Lotterer and Bruno Senna taking third with a 1:42.218s, which put them just over two tenths off pole, and less than a tenth off the No.8 Toyota which ended up second on the grid with a 1:43.159s. The headline time from the duo came from Lotterer, whose last-ditch attempt to take pole saw him reel off a 1:42.869s, which proved to be the second-fastest single lap time of the session. Could we see a privateer take pole of the season, and really challenge for a win? It’s beginning to look that way!

GTE Am turned on its head
GTE Am has seen major change over the past two weeks. The once dominant No.88 Dempsey Proton Porsche has had all of its points stripped after an investigation into data tampering, meaning it’s now a wide-open title race now. Team Project 1 has taken over at the top of the classification now; an impressive feat in its first year, but there are only 20 points between the German outfit and its nearest challenger, the No.98 Aston Martin Racing Vantage. With Sebring and Le Mans worth more than standard points, one slip up could see the points tally have a very different look by the end of the season. 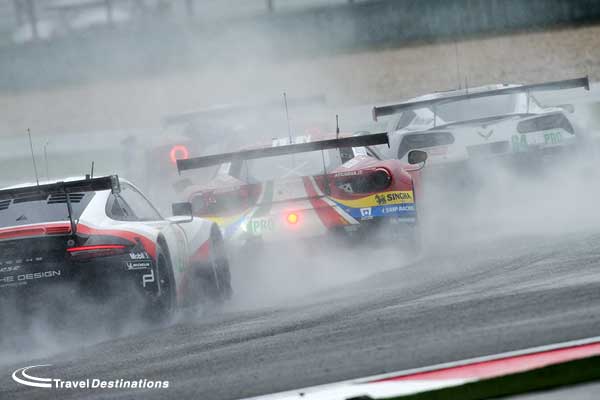 And that’s exactly what we want, both GTE classes producing close racing and thrilling title battles.
See you in Sebring! 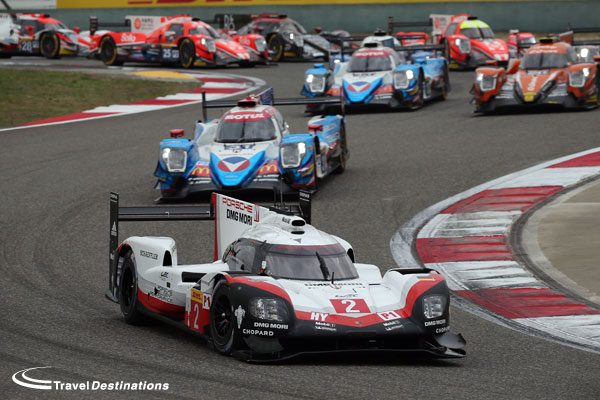 The 2017  FIA World Endurance Championship held its penultimate round in China last weekend. The FIA WEC 6 Hours of Shanghai provided some thrilling racing and saw some of the titles secured before the final round in Bahrain later this month.  Our man in the stands was track-side once again to watch all the action and bring you this summary:

GTE is awesome (and will only get better)
It is safe to say that the 2017 Six Hours of Shanghai was a thriller throughout, in part because the GTE Pro class produced so much entertainment. The automated Balance of Performance continues to prove time and time again to make the racing close and fair. The differences on track stem from tyre-wear and driver ability, which is how it should be. Ford took the win with Harry Tincknell and Andy Priaulx boosting their title hopes, but Porsche and later Ferrari could have taken the top step of the podium too. The driver line-ups are all world class. The cars are too – the only one looking exposed currently being the older Aston Martin Vantage, in it’s last year – and it’s only going to get better in 2018; Aston Martin will have their new car and BMW will be joining the fray. With action like this on track in GTE, whatever happens to LMP2 and LMP1 for that matter, means the FIA WEC and Le Mans 24 Hours will prove unmissable in the ‘Super Season’.

LMP2 was a dogfight
The LMP2 class was always going to be close with the FIA WEC’s 2017 entry featuring near-identical ORECA 07 Gibsons across the board. However, as the teams have got their heads around the nuances of the new package, three front-runners have emerged. That means that the class competition is very close on track for extended periods of time. As the championship rolls towards a conclusion, nerves are jangling. The Shanghai race saw swings of fortune of astonishing magnitude. The Jackie Chan DC Racing No.38 car leading at one point, stood to leave China with a mighty 16-point advantage in the standings, but one minor slip by Ho Pin Tung saw that advantage evaporate, together with their championship lead. The Chinese-flagged team now facing the prospect of a four-point deficit, losing their lead for the first time this season. Going into the finale, all of a sudden, it’s Vaillante Rebellion’s title to lose.

Beyond that, at times there was, ill-judgement and ill-temper galore up and down the order, with almost every car involved in one incident or another; In the case of several cars, several incidents. It made for a topsy-turvy competition, which some drivers will hope to forget. As the sign of a maturing ultra-high performance pro/am competition, there was plenty to savor, including for the first time this season outside of Le Mans, the regular sight of LMP2 cars re-passing LMP1 Hybrids on the long-back straight, as the factory monsters went into lift and coast. Make no mistake, these are very quick cars.

GTE Am is ready for a refresh
The spark went out of this class after a perfect storm of misfortune through Turn 1. This effectively accounted for both Ferraris;  the Spirit of Race 488 retiring, and the Clearwater example losing several laps to repairs. The rest of their day was effectively a run to claim as many points as possible. Aston Martin dominated, scored the team’s 50th win in competition, and took the lead in the championship, but the reality was that the class lacked a little something for the first time in 2017. The signs are though, that it will all change with a major uplift in the quality and numbers of teams available for selection in 2018/19. New cars, in particular the advent of the class of the 2017-spec mid-engined Porsche 911 RSR, and new teams. Watch this space.

It is too late for Toyota
Toyota’s pace at Shanghai was spell-binding once again. Porsche simply had no answer to the TS050 HYBRID in its evo aero kit. Tellingly, the remaining factory hybrid team is making preparations now for 2018/19. It looked for much of the race, as if Toyota would delay Porsche’s Manufacturers title celebrations until Bahrain, but a fumble for Pechito Lopez as he tried to lap one of the Porsches saw the No.7 car delayed in the final hour, after running in the lead. The required repair put Porsche’s 919s on two steps of the podium; enough to add the Manufacturers Championship to the World Drivers Championship, won for the second time; a unique achievement by Timo Bernhard and Brendon Hartley (and for the first time, by Earl Bamber.) In the process, Hartley scored probably a unique achievement in world motorsport, taking part in a Formula One Grand Prix last week and winning a completely different FIA world title on the following weekend. For Toyota, a completely different challenge awaits, the R&D justification for its programme is intact for 2018/19, which will see them with a major target painted on the rear of both TS050s, from a growing gaggle of privateers who no-doubt have sensed the opportunity to add a further dramatic chapter in Toyota’s win-free history at Le Mans

Shanghai is a popular race
There has long been much chatter, about China’s place in the FIA WEC calendar. “Nobody comes”, “nobody cares”, “deserted stands” etc. Whilst it is true to say that it is far from the most popular race in the WEC family, all of the above assertions are increasingly false and entirely incorrect. For at least the third consecutive running of the 6 Hours of Shanghai, the main stand was very well filled for the opening hours of the race at the very least. The car park too was well filled; with large groups of school children also in attendance in the stands and around the paddock. Behind the stands, there was plenty of entertainment available for the assembled masses, with manufacturer stands, sponsor displays and food, all well received by the public. In the fringes of the race meeting, there is a huge amount of commercial activity, and, this year in particular, a lot of local promotion both via the circuit and local heroes Jackie Chan DC Racing. There were special metro tickets, downtown building displays and media activity helping to boost the attendance and global pride; others on the calendar, some of which will not be returning next season, would do well to take a look.