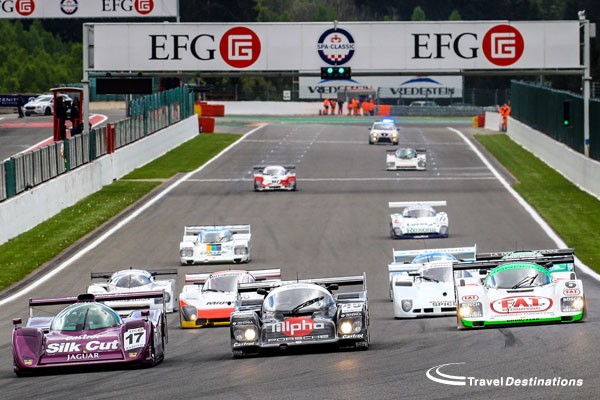 A week after the FIA WEC 6 hours of Spa-Francorchamps it was the turn of the golden oldies of the world of endurance racing to take to the legendary Belgian circuit for the 6th Spa Classic. If the weather was a bit cooler than the weekend before, the action on the track was equally competitive and the spectacle was equally enthralling. The spectators formed a guard of honour around the lines of historic cars about to go out onto the track, and everyone was able to take advantage of the relaxed nature of the Spa Classic to get up close to the drivers and their machinery.

The weekend provided people with the opportunity to relive some of the greatest events in the history of the Spa-Francorchamps 24 Hours in the touring car era, as well as the Spa 1000 km with prototypes and GTs covering the period 1952 (Aston Martin DB2) to 1993 (Peugeot 905). In all, four decades on this circuit marked by victories of emblematic models like the Ferrari 250 LM (1965), Ford GT40 (1968) and the Porsche 962 (1986), all of which were represented on the track this weekend. A total of some 216 racing cars divided up into six grids (Classic Endurance Racing 1 & 2, Group C Racing, the Heritage Touring Cup, Trofeo Nastro Rosso & Sixties’ Endurance) put on a nine-race action-packed show out on the track from Friday onwards, including one that felt absolutely magic on Saturday evening as night fell. Spectators, who were able to tear themselves away from the racing that continued nonstop out on the beautiful Belgian circuit, for a few minutes were able to experience musical and motoring entertainment both in and out of the paddocks, whilst children could have their first taste of driving pedal-powered karts round their own circuit, and then take on their parents at the controls of radio-controlled cars. Other forms of entertainment included jazz music and a unique DJ housed in VW van as well as many boutiques (scale models, clothes, bookshops, etc.).

One of the great assets of an event like the Spa Classic is the access all areas philosophy that allows spectators to wonder through the garages and paddocks, as well as access all of the grandstands and visit the Brasserie on top of the F1 building. The more adventurous also enjoyed a walk along the footpath that offers spectacular views around the whole circuit. Inside and outside the track car clubs gathered to add to the weekend display. Four different BMW clubs that had chosen Spa Classic to celebrate the 100th anniversary of the make, many owners of historic cars came to the Ardennes to enjoy the party and represented makes as diverse as Corvette, Datsun, Honda, MG, Porsche, Triumph and TVR. Enough to retrace the history of the motor car through 700 models ranging from the legendary Citroën Traction Avant to the incredible Lamborghini Miuras, Ferrari F40s and F50s. Guests booked with Travel Destinations enjoyed the Spa Classic more than most. Not only did they park their cars in pride of place, stretching the full length of the top level F1 paddock, but they also had access to the Travel Destinations hospitality lodge overlooking Eau Rouge, where they could enjoy their own pit stop with tea, coffee and biscuits without missing any of the action. Those with dreams of being racers themselves were also able to take their cars out on track to enjoy the twists and turns of Spa-Francorchamps first hand.

The Spa Classic event will be returning in May 2017 & Travel Destinations will once again be there in the middle of the action, enjoying this great event. If you are interested in joining us at the Spa Classic in 2017, please register your interest with us now, to be among the first to receive our special offers.