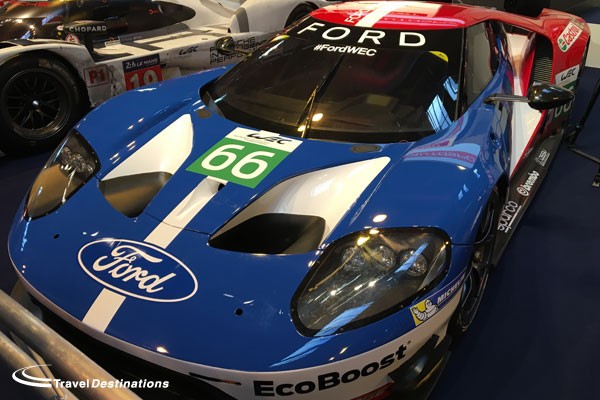 Okay so that’s a rather arrogant assertion, there are bound to be stories through this year that eclipse some of those below but to do so they’ll have to be very big indeed!

1- Ford – 50 Years on
The Blue Oval is back and this is no badge engineering stunt.
The new Ford GT is a GT racing mould breaker, the first of a brand new breed of n few generation GTE cars.
It’s very clear that Ford’s turbo V6 engined ‘halo’ hyper car has been designed first as a racer and THEN as a road car.  It’s attention to aerodynamic detail is astounding, and whilst the front of the car pays homage to its grandaddy, the iconic 1960s Ford GT40, the 2016 version has a rear end like no other road car, ever!
So that ticks the boxes for the car fans, but the racing fans get an even better treat – two huge programmes, one in North America, and the other in the full FIA WEC, both with a pair of cars apiece, will come together for the 2016 Le Mans 24 Hours.
If Ford’s plans come together we should see four of these extraordinary cars battling it out with their decades long racing rivals from Ferrari (who have their own new turbo-engined 488) Porsche, Aston Martin and Corvette
This could be the year when GT racing joins LMP1 in the headlines!

2 – Bigger Grid at Le Mans
2016 will see a bigger grid than ever before at the Le Mans 24 Hours as the ACO start a two year programme to build the grid to 60 cars.
This year will see a staging post towards that aim, 58 cars should start, after a maximum of 56 to this point.
OK we are going to have a couple off fewer factory cars than anticipated, economic pressures on Porsche and Audi and the withdrawal of the popular but underperforming Nissan effort have seen to that but the strength in depth across the world of endurance racing should see an astounding mix of prototype and GT cars in June, and with some new spectator viewing areas being installed at Indianapolis there could be some of the best views in years available.
More cars, more variety, Do not stay home in June!

3 – War at the Nurburgring
The Nurburgring 24 Hours is always a spectacle, but 2016 should be very special indeed.
Why?
Because it is one of the biggest races in Germany, and every significant German GT car manufacturer has brand new product to sell.
Audi debuted their new R8 last year and won, but now BMW (M6 GT3), Mercedes Benz (AMG GT3) and Porsche (911 GT3 R) all have new toys to field too, and in this market, both for marque prestige and bragging rights, and for car sales, nothing matters more.
It matters enough to Porsche that they have preferred preserving this programme to their WEC GTE effort in 2016 to mount a full house, two car all factory driver effort under the icily effective auspices of Olaf Manthey.
Add into the mix confirmed multi car factory efforts from both Aston Martin and Bentley, and more potential factory contenders too and this could be something truly spectacular.
And that’s before we have even mentioned the track, the biggest, baddest, most challenging and yes most dangerous road racing course on the planet.
Work has been done around the circuit to enable the organisers to lift the localised speed restrictions so now it is going to be about who has built the better GT3 weapon.
Multi car teams packed with factory drivers can be guaranteed – If you haven’t seen this race live then honestly what are you waiting for – This is THE year to go.

4 – The British Are Coming!
Moves in the close season to reshuffle the pack have left patriotic British sportswear racing fans with an embarrassment of riches.
In the FIA WEC there are likely to be no fewer than nine British factory drivers stretched across LMP1 (Oliver Jarvis at Audi, Anthony Davidson and Mike Conway at a resurgent Toyota) and GTE Pro (Ferrari: James Calado and Sam Bird, Ford Marino Franchitti and Andy Priaulx, Aston Martin Darren Turner and Jonny Adam)
Add to that little lot Oliver Gavin (Corvette), Richard Westbrook (Ford) and 2015 overall winner Nick Tandy (Porsche) for Le Mans, all in GTE Pro and by god there might just be some singing of the National Anthem for the podium!

And beyond those three there’s more to look forward to too.
The FIA WEC adds a ninth round with Mexico City joining the calendar. If that’s too rich for your travelling blood then the astonishingly entertaining European Le Mans Series has also added a race, up to six for 2016 as the Series visit Spa in October.
There are more opportunities than ever to see better endurance racing with better cars and better teams in more places than at any time in living memory – Go on, treat yourself, get off the couch and pick up the phone – I’ll see you in the paddock!