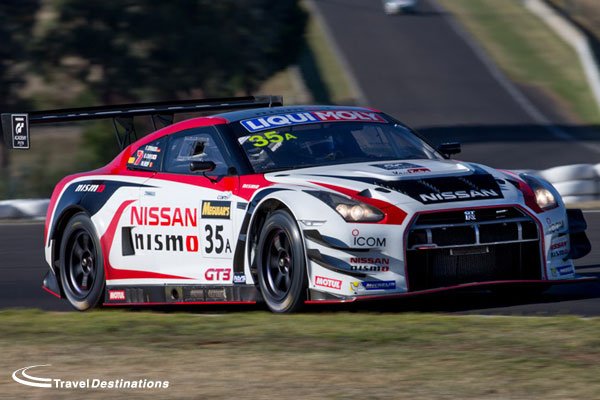 Nissan win another thriller at Bathurst

It is remarkable how many endurance races still come down to decisions made in the last few minutes of the race. Once again, the Mount Panorama circuit in Bathurst didn’t disappoint. The 12 Hours of Bathurst came down to a 4 way shoot out for the podium places, with Nissan and driver Katsumasa Chiyo emerging victorious.

In a 12 hours race like Bathurst, strategy, fuel and tyres are often hurriedly recalculated as safety cars and yellow flag waving marshals interrupt proceedings. This year’s Bathurst 12 Hours had 20 safety car periods leading to seven different manufacturers claiming a share of the lead throughout the race. With around an hour to go, there were 5 cars, each from a different manufacturer on the lead lap with desires on a win. Some of these teams had already rolled the dice and were running low on fuel or worn rubber, but couldn’t afford another stop.

Going in to the final hour the lead was held by Matt Bell in the Bentley, closely followed by pole sitter Laurens Vanthoor in his Audi. A minute back in third was Katumasa Chiyo in a Nissan, with a Mercedes in fourth ahead of the Craft-Bamboo Aston Martin.

Tension was already building when another stoppage was called, when David Brabham’s Bentley was shunted in to the wall at the Cutting. Brabham was taken to hospital, but fortunately was later released with just a couple of broken ribs. But the rest of the field continued around the circuit until with less than 15 minutes remaining the green flag was waved again. The battle at the front was now a three way tussle, with Vanthoor’s Audi trying to pass Bell’s Bentley & Chiyo close behind watching with interest. Vanthoor tried a few times to pass the Bentley but Bell managed to hold on, if only just.

Perhaps the battle between the top two was all engrossing as with just a couple of laps remaining a risky manoeuvre by Chiyo in the Nissan managed to claim second place from the Audi, and then almost immediately managed to pass the Bentley for the lead.
Going in to the final lap, Chiyo’s Nissan managed to pull clear of the chasing pair, who continued to fight right to the end, but they in turn were now being caught by the Aston-Martin that had newer tyres and was flying. With seconds remaining Vanthoor managed to pass the Bentley & although the Aston then passed him, he managed to reclaim second (after some contact) to take second. With the Aston Martin finishing second, it was disappointment for Bell & Bentley as they narrowly missed the podium after a great drive.

In the end it was Nismo Nissan GT-R who were celebrating as they stood at the top of the podium. The Audi R8 LMS Ultra of Phoenix Racing was second, and it was the Aston Martin Vantage of Craft Bamboo Racing that finished third. The top seven finishers were from seven different manufactures indicating the variety and class of this amazing race. The whole Bathurst 12 Hours, plus practice and qualifying was called by our friends at Radio Show limited; the team behind Radio Le Mans. You can join them at next year’s race through our exclusive hotel & hospitality option that includes your own personal behind the scenes tour with John Hindhaugh and the team. Prices for the 2016 bathurst 12 Hours package will be published soon, but you can register your interest now to ensure you are the first in line! Email us your contact details now on info@traveldestinations.co.uk to learn more.