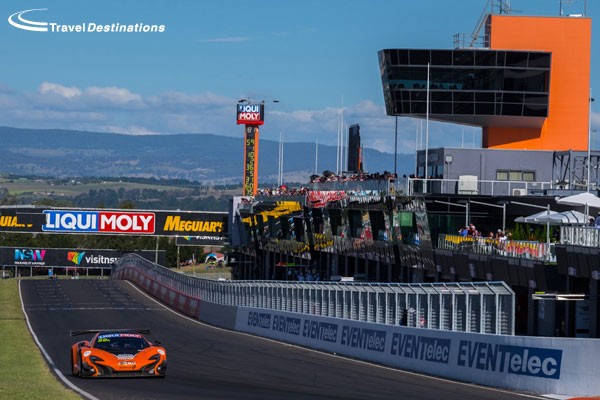 Every big sportscar event rises and falls in prominence for various reasons throughout each decade, and at the moment one that’s most definitely on the up is the Bathurst 12 Hour. Over the past few years the quality of the grid has skyrocketed, along with its promotion and viewership. It’s a spectacular showcase of endurance racing, in a unique setting.

Mount panorama is an astonishing place to watch a motor race, steeped in history, and in terrain. If you visit Bathurst for the 12 Hour you’ll see GT cars tackling one of the world’s toughest and most technical circuits, through day and night, and from a variety of vantage points. As a spectator, you can see The Chase, the front straight, Turn 1 and the top of the Mountain. Thankfully, there’s a shuttle bus to the top of the mountain too, so you don’t spend the whole race building up the courage to tackle the ascent to the top of the circuit. Once you get there, the views are stunning, and unlike anything you’ll see anywhere else on the planet, especially as the sun rises at the start of the race, which don’t forget kicks off in the darkness early in the morning and runs through the day. So what’s the grid like? Well, it’s now a race with a plethora of factory supported GT3 teams, from the likes of Bentley, Nissan, McLaren, Aston Martin, Ferrari and Porsche. The driving talent is top notch too, with a combination of Europe’s finest GT drivers and V8 Supercar legends, past and present. There’s also plenty of other cars in the race, with GT4, Porsche Cup and specials making up the remaining classes.

One thing’s for sure too, that everyone on the circuit pushes hard. The Bathurst 12 Hour has seen some monumental battles between star drivers, especially recently. Only last year with McLaren’s Shane Van Gisbergen broke the circuit the lap record in Qualifying, before going on to battle through the races with numerous other star drivers on his way to victory. The past three years in particular, have provided spectators with some of the closest and most dramatic finishes too. The nature of the Bathurst circuit is such that going a lap down isn’t as common as other places, because the traffic density is off the charts. It means we’ve seen last-lap passes for the lead, collisions in the final hour and drag races to the line, sometimes all in the same race.

If you’re heading 30 hours round the world on a plane though, you’re not likely to just turn up for the race and then head home. With Travel Destinations you can book a self-catering apartment near the circuit, hire car and hospitality along with tickets and flights. It’s certainly worth a bolt-on holiday before or after. If you love a good road trip, you’ll be in heaven too, as the drive from Sydney to Bathurst is three hours of pure driving pleasure, as you pass stunning vistas and cross the Blue Mountains. Going to the Bathurst 12 Hour, is a trip that’s more than just going to a race, you’re going for an experience. While travelling around Europe and even to America these days can at times feel pretty ordinary, flying to Australia for a break most certainly isn’t. The Bathurst 12 Hour is about door-to-door racing, spectacular views, road trips, atmosphere and so much more. A trip to the Bathurst 12 isn’t your usual trip to go and see a motor race, it’s an adventure of a lifetime. Join us this year in Bathurst with our accommodation and hospitality offer.